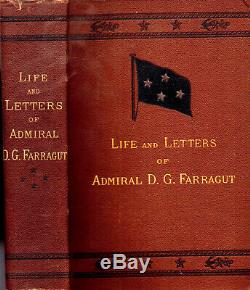 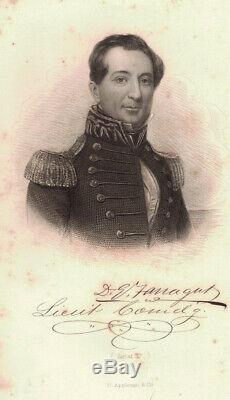 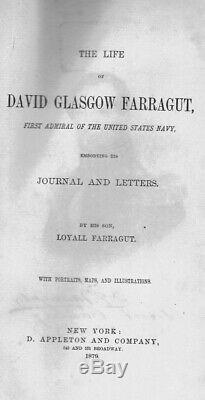 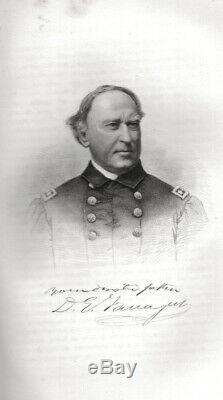 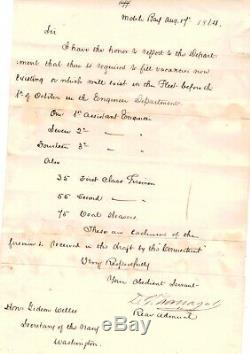 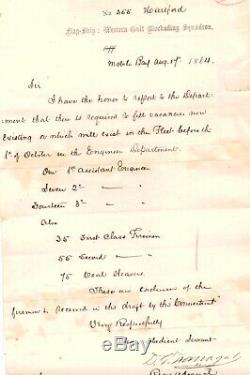 From 1879, a rare and unique copy of the first edition, The Life of David Glasgow Farragut, First Admiral of the US Navy. Embodying his Journal and Letters. By his Son, Loyall Farragut. With Portraits, Maps and Illustrations.

Sized 9x6 inches, 586 pages. Bound in period Victorian decorated cloth. Inside the book, we found a document from 1864, during the siege of Mobile, Alabama, datelined Mobile Bay. The document calls for the filling of 6 positions in the Navy.

Hartford served in several prominent campaigns in the American Civil War as the flagship of David G. Farragut, most notably the Battle of Mobile Bay in 1864. At the bottom of the document, Admiral Farragut signed D.

A copy was sent to Hon. Gideon Welles, then Lincoln's Secretary of the Navy.

The document is sized 13x7 inches, and is on period paper. Some restoration to the back of the document. The man who led the Union fleet at Mobile Bay was Rear Admiral David G. Farragut, no longer Flag Officer Farragut.

Navy had undergone an organizational change in the second year of the war, one feature of which was the creation of the rank of Rear Admiral. The new rank implied that the ships of the navy would be employed as members of a fleet, not simply as collections of vessels with a common purpose.

The ships that made up his attacking fleet were of several distinct types, including some that had not even existed when the war began. Of the 18 vessels selected, eight were conventional wooden-hulled ships carrying large numbers of guns that fired broadside. Four of these had been with the West Gulf Blockading Squadron from the start (flagship Hartford, Brooklyn, Richmond, and Oneida) and had fought in its battles on the Mississippi.

Two smaller gunboats had likewise been with Farragut since the capture of New Orleans: Kennebec and Itasca. David Glasgow Farragut (July 5, 1801 August 14, 1870) was a flag officer of the United States Navy during the American Civil War. He was the first rear admiral, vice admiral, and admiral in the United States Navy. He is remembered for his order at the Battle of Mobile Bay usually paraphrased as "Damn the torpedoes, full speed ahead" in U.

Born near Knoxville, Tennessee, Farragut was fostered by naval officer David Porter after the death of his mother. Despite his young age, Farragut served in the War of 1812 under the command of his adoptive father. He received his first command in 1824 and participated in anti-piracy operations in the Caribbean Sea. He served in the MexicanAmerican War under the command of Matthew C. Perry, participating in the blockade of Tuxpan.

After the war, he oversaw the construction of the Mare Island Naval Shipyard, the first U. Navy base established on the Pacific Ocean. Though Farragut resided in Norfolk, Virginia prior to the Civil War, he was a Southern Unionist who strongly opposed Southern secession and remained loyal to the Union after the outbreak of the Civil War. Despite some doubts about Farragut's loyalty, Farragut was assigned command of an attack on the important Confederate port city of New Orleans.

After fighting past Fort St. Philip and Fort Jackson, Farragut captured New Orleans in April 1862. He was promoted to rear admiral after the battle and helped extend Union control up along the Mississippi River, participating in the Siege of Port Hudson. With the Union in control of the Mississippi, Farragut led a successful attack on Mobile Bay, home to the last major Confederate port on the Gulf of Mexico. Farragut was promoted to admiral following the end of the Civil War and remained on active duty until his death in 1870. The item "VERY RARE 1879 CIVIL WAR NAVY FARRAGUT ILLUSTRATED RARE SIGNED DOCUMENT LETTER" is in sale since Saturday, May 2, 2020.

This item is in the category "Books\Antiquarian & Collectible". The seller is "antiquebookcentral" and is located in Fernandina Beach, Florida. This item can be shipped worldwide.