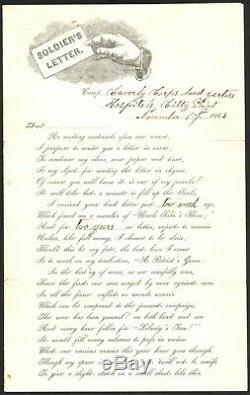 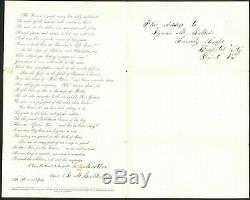 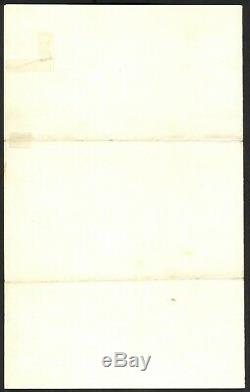 Unusual Civil War Partly-Printed Soldiers Letter 22nd NY Cavalry. Offered for your consideration is an unusual, mostly pre-printed soldiers letter, signed at the conclusion by a member of the 22. The top of the letter features a vignette depicting a hand holding a piece of paper between the first two fingers, printed upon which is SOLDIERS LETTER..

Below and to the right of this figure is the address and date, which reads Camp Caverly Corps head qarters / Hospitels Citty Point / November 10. This is followed by a roughly two-page, pre-printed letter, presented in the form of a poem, with two spaces left for manuscript additions involving lengths of time. There is also a space at the conclusion for his relationship to the recipient, as well as a blank line for his signature. In this case, the relationship is noted as Brother , with his name being signed as L M Baldwin. Following this is a blank page, upon which Baldwin has written Pleas Address to / Lyman M. Baldwin / Caverly Corps / Hospital City / Point Va. The final page (back) is blank. This unusual letter was printed in black ink on blue lined white paper, with the manuscript additions being accomplished in period iron gall ink. A statement at the bottom of the second page indicates that it was Entered according to Act of Congress, in the year 1864, by R. Nicol, in the Clerks Office of the District Court for the District of Columbia. If they were used by regular soldiers, it seems somewhat lazy and impersonal. This would make a great addition to any Civil War correspondence collection. Cursory research indicates that Lyman M. Baldwin was 30 years old at the time of his enlistment at Rochester, New York, on December 24, 1863. He was mustered in as a private into Company I, 22. New York Cavalry on February 2, 1864. He was mustered out on August 1, 1865, at Winchester, Virginia. During his service, Baldwin was apparently promoted to quartermaster sergeant. New York Cavalry was formed in late 1863 and early 1864, participating in virtually all of the cavalry actions of the Army of the Potomac from April, 1864 through the close of the war.

The regiment had 3 officers and 20 enlisted men killed or mortally wounded in combat and 1 officer and 183 enlisted men who died of disease. The presently offered specimen exhibits signs of period use, though the body of the letter still retains a lovely eye appeal. Toning is present across the entire surface, imparting to the paper a beige to light tan hue. This toning is slightly darker at the edges, while foxing spots are scattered throughout the piece, especially pronounced in the blank areas on the back page. Two horizontal folds are present, with significant soiling noted on the otherwise blank back.

Measuring approximately 5 x 8 inches when folded and approximately 8 x 10 inches when laid flat, this piece would make a wonderful addition to any collection (though the information is pretty standard). If you have any questions regarding this item, please ask before purchasing. He has contributed to numerous reference books within the industry, as well as being a co-author of The Comprehensive Catalog and History of Confederate Bonds, 2. He is an authorized submitter to NGC, PCGS, and PMG, a diamond founding member of Coin Dealers Helping Coin Dealers and a supporter of the Industry Council for Tangible Assets.

American Coins and Collectibles can be found at many of the state and local coin shows. The item "Unusual Civil War Partly-Printed Soldiers Letter 22nd NY Cavalry" is in sale since Tuesday, May 12, 2020.