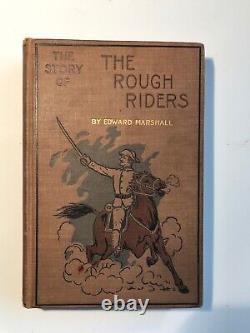 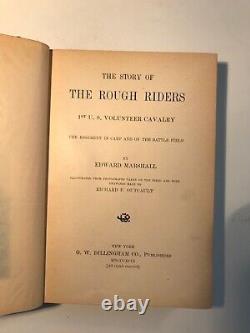 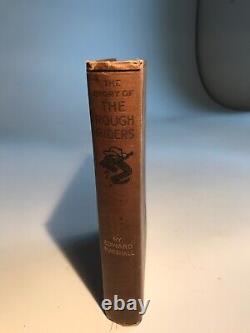 From the Preface: The author makes no apology for devoting an entire book to the story of one regiment in the Spanish American War. The Rough Riders were the first volunteer regiment organized, armed and equipped.

They were the first volunteer soldiers to land in Cuba. They raised the first flag flown by the military forces of the United States on foreign soil since the Mexican War. The most famous of all the units fighting in Cuba. The "Rough Riders" was the name given to the First U. Volunteer Cavalry under the leadership of Theodore Roosevelt.

Roosevelt resigned his position as Assistant Secretary of the Navy in May 1898 to join the volunteer cavalry. The original plan for this unit called for filling it with men from the Indian Territory, New Mexico, Arizona, and Oklahoma. However, once Roosevelt joined the group, it quickly became the place for a mix of troops ranging from Ivy League athletes to glee-club singers to Texas Rangers and Indians. Roosevelt and the commander of the unit Colonel Leonard Wood trained and supplied the men so well at their camp in San Antonio, Texas, that the Rough Riders was allowed into the action, unlike many other volunteer companies.

They went to Tampa at the end of May and sailed for Santiago de Cuba on June 13. There they joined the Fifth Corps, another highly trained, well supplied, and enthusiastic group consisting of excellent soldiers from the regular army and volunteers. The Rough Riders saw battle at Las Guásimas when General Samuel B. Young was ordered to attack at this village, three miles north of Siboney on the way to Santiago.

Although it was not important to the outcome of the war, news of the action quickly made the papers. They also made headlines for their role in the Battle of San Juan Hill, which became the stuff of legend thanks to Roosevelt's writing ability and reenactments filmed long after. I have been a private collector of Civil War books and ephemera for about 30 years. I have recently decided to reduce the size of my library. I will be posting many, many Civil War related books in the coming months.