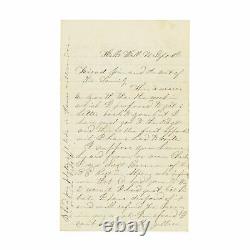 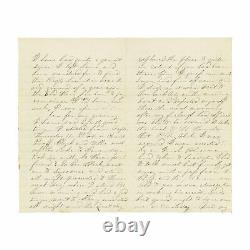 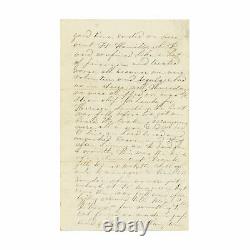 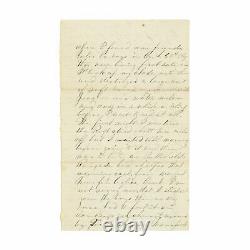 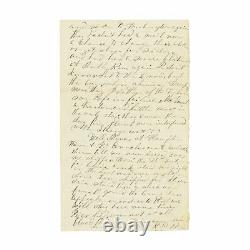 Bush of the 12th New York wrote this six-page letter on September 6, 1862, just after catching up with his regiment after returning from furlough. Writing to his friend James Harrington, a school teacher in Nanuet, Bush discusses the route of his long journey back to the front. I have had quite a jaunt since I left home, and have wandered far to find the Regt, he writes. Here it is near the old ground of a year ago.

He then describes his troubles in getting out of New York City. By an Irish policeman and taken to head qrs. I had to talk sweet, but finally got away with a pass from the Chief, and the policeman was told to use more discretion in making his arrests. Good, but youd ought to have seen me in custody.

Now, my good times ended, we were sent Ft Hamilton, L. And confined like a lot of prisoners and treated worse, all because we were. And regulars had us in charge.

After boarding the steamer for the trip south, he discovers. The cooking arrangements were all in use and we had to live on hard bread and uncooked bacon, and that after living as I had for a month.

This was the winter of our discontent. Franks jelly kind of took the chill off and I managed to live till Sunday, when we were put ashore at Ft Monroe, but everything was full and after lying around till Mon P. I broke for something to eat, forged or made a pass, and got over to Hampton, where I found some friends, Yates Co boys in Co A 50th Reg. They were living first rate and I took up my abode with them.

Bush then finds the camp of his regiment empty, they having marched north to the Battle of Second Bull Run. I dont know what to think now, but the boys whose opinions I respect more than I do those of the Tribune say Pope is a failure, McDowell a traitor, and Little Mac is the only other. They curse the day his plans were interrupted with.

The last leg of Bushs journey began at Hampton, Virginia, where convalescents gathered. Stayed two nights on the boat and one night on the shore there. Stayed there a week and finally joined the Army here. Appearances indicate that we will stay here some time.

He was promoted to major in January 1865, was captured at Hatchers Run on February 6, paroled March 14, and mustered out at Washington in late May 1865. The letter was written on six pages (on two separate sheets) of a 5 x 8 letter sheet. It is in excellent condition with light toning. Creased at the original mailing folds. The letters full transcript is found below.

Friend Jim and the rest of the Family. This is nearer a month than the week in which I proposed to get a letter back to you, but I have just got to the Regt and this is the first opportunity I have had to write. I suppose you have heard from or seen Charlie.

I saw Sergt Brennan of the 33d Regt in Albany, who informed me that C had gone to Wis to recruit. I had just got his hat. Im afraid I cant do that by the jellies.

I have had quite a jaunt since I left home, and have wandered far. To find the Regt, here it is near the old ground of a year ago. The Old Harry has been to pay ever since I!!!!! Have been sick, I was afraid of it.

As for my journey, I have had a pretty good time. I started from Naples Thursday the 7th ult. In co with Prof Clark and Willie. Went up the lake to Canandaigua.

Took tea with Mr Harringtons friend? Ex Gov Clark, went on to Syracuse and stayed all night. Proceeded to Homer next day, where I stayed till Mon morning and had a good time.

Went to Albany and stayed all night and the next day. Explored the place to quite an extent. If you had been there, Jim, I guess we could have had fun of some kind. I did, as it was. Went to New York City on the evening boat, and reported myself there the next morning after my furlough had expired.

The boat was full before we got on board. The cooking arrangement were all in use and we had to live on hard bread and uncooked bacon, and that after living as I had for a month. They were living first rate and I took up my abode with them and destroyed a large unit of soft bread, milk, peaches, and watermelon, and once in a while a sling before I went to bed at all. Well, I was at Hampton wasnt I?

Convalescent soldiers there till we numbered 300. I had my photograph taken in Homer.

Will send one as soon as I get them. Please see my other items for more interesting Civil War letters, documents, and images.

The item "Sept 1862 Civil War Letter 12th New York Arrested Returning from Furlough" is in sale since Saturday, November 27, 2021. This item is in the category "Collectibles\Militaria\Civil War (1861-65)\Original Period Items\Correspondence, Mail". The seller is "iron-horse-sales" and is located in Champaign, Illinois.