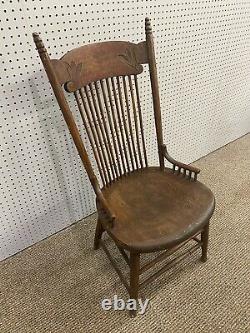 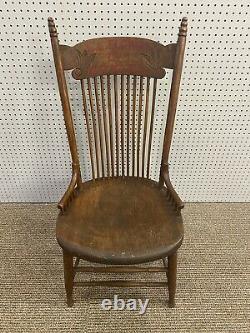 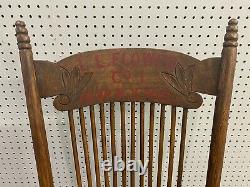 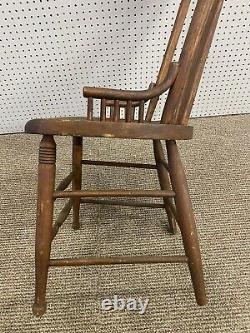 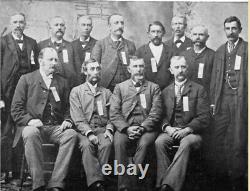 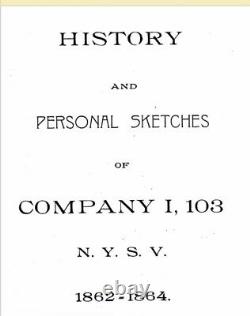 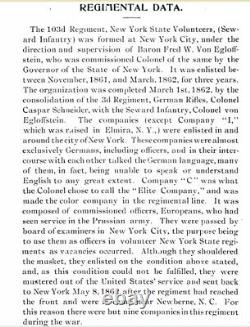 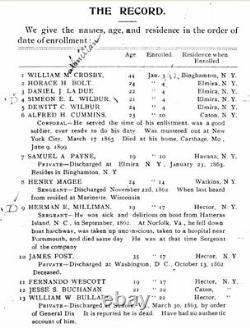 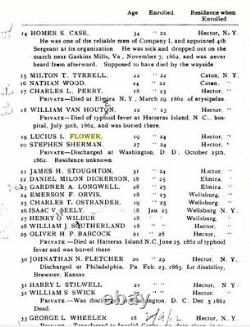 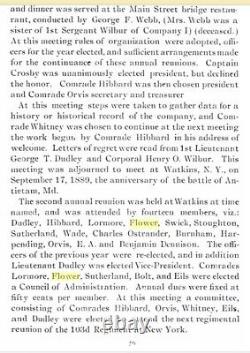 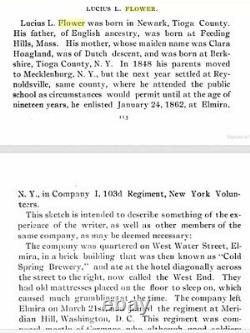 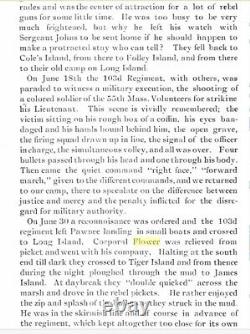 A beautiful chair that was owned by Civil War veteran Lucius L. Flower who served at Antietam, Fredericksburg, and other famous battles. Great condition for a piece of its age, with some very light wear and patina.

See pics for more detail. We are totally in the dark on value of such a historical piece, so all reasonable offers will be considered. Below is various information on his life and service in the Civil War and in the veterans association afterwards.

He is shown in the group photo, but we havent been able to tell exactly which one is him from our quick research. The photo and text are from a book about the Seward Infantry, which can be seen in more detail here. FLOWER was born in 1842, in Newark, N. In 1868 he married Miss Stella S. Coles, who died in 1876. In 1877 he married Miss Wilhelmina Verscelius, of Watkins, N.

In 1866 he located in Tioga county, and, with Lucius Flower, his father, and Stephen Wartons, he built a steam saw-mill. In 1871 they built another further along Lamb's Creek, which they still carry on.

1st Brigade, Infantry Division, Defenses of Bermuda Hundred, Va. Of Virginia to December, 1865. Duty in the Defenses of Washington, D.

Ordered to the Shenandoah Valley, Va. September 27, and duty there until November 22.

Battle of Cedar Creek October 19. Ordered to Bermuda Hundred, Va. November 22, and duty in the defenses at that point to March, 1865. Siege operations against Petersburg and Richmond December, 1864, to April, 1865.

Fall of Petersburg and Richmond April 2-3. Of Virginia until December, 1865. Mustered out December 7, 1865. Regiment lost during service 5 Officers and 61 Enlisted men killed and mortally wounded and 2 Officers and 100 Enlisted men by disease.

Mustered in: November 1861 to March 1862. Mustered out: December 7, 1865. The following is taken from New York in the War of the Rebellion, 3rd ed. Von Egloffstein, was organized in New York city March I, 1862, by the consolidation of the 3d Regiment German Rifles, Col.

Casper Schneider, with the Seward Infantry, Colonel von Egloffstein. It was mustered in the service of the United States between November, 1861, and March, 1862, for three years. Company C was mustered out May 8, 1862. At the expiration of its term of enlistment the men entitled thereto were, under Col.

William Heine, honorably discharged at New York city, and the regiment retained in service, but March 4, 1865, consolidated into three companies, A, B and C. The companies were recruited principally: A, Grenadiers, in New York city; B, C Corps d'EliteD, E, F 3d German Rifles, G, H, I and K Baker's Rifles and New York Battery, at Elmira. The regiment left the State March 5, 1862; served at Washington, D.

From December, 1864; in the Department of Virginia from April, 1865; and it was honorably discharged and mustered out, under Capt. Redlich, December 7, 1865, at City Point, Va.

Quentin, Benja min Ringold, Joseph Morrison. This regiment, known as the Sew-ard infantry, recruited in the counties of New York and Chemung and organized at New York city, March I, 1862, was mustered into the U. 1861, to March, 1862, for three years.

C was mustered out May 8, 1862. On the expiration of its term of service the original members (except veterans) were mustered out at New York city, under Col. Heine, and the veterans and recruits were consolidated on March 4, 1865, into a battalion of three companies. This battalion was retained in service until Dec.

7, 1865, when it was mustered out, under Capt. William Red-lichj at City Point, Va. The regiment left the state on March 5, 1862, and was stationed for a month at Washington and Norfolk, when it was assigned to the 1st brigade, 2nd division, Department of North Carolina, and took part in the actions at Foy's plantation, Fort Macon, Gillett's farm, Haughton's mill and Dismal swamp, N. When the 9th corps was formed in July, 1862, the 103d was assigned to the 1st brigade, 3d division, and moved with the corps, under Maj.

Reno, on McClellan's Maryland campaign in September. It was heavily engaged at Antietam, losing 117 officers and men in killed, wounded and missing, its severest loss being incurred in the gallant charge at the stone bridge. Among the mortally wounded were Capts.

Ringold being among the killed. In August it was ordered to South Carolina, where it took part in the siege of Fort Wagner and the subsequent operations about Charleston harbor. During the actions on James island, in May, June and July, 1864, it lost 45 men in killed, wounded and missing. 1864, it was assigned to the 1st brigade, Ferrero's division, Army of the James, at Bermuda Hundred, Va. And took part in the siege of Petersburg until its fall on April 2, 1865, but sustained no further losses in battle.

During its term of service it lost 4 officers and 61 men killed and mortally wounded; 3 officers and 100 men died of disease and other causes, a total of 7 officers and 161 men. Flower [SRGP 85937], for many years a resident of this place, an uncle of Edwin S. Coles, publisher of the Mansfield Advertiser, died in Corning on Saturday, aged 85 years. He was the father of Dr. Edith Flower, who practiced medicine here for many years.

Flower was a veteran of the Civil War, having enlisted at the age of 19 years, Jan. He was a member of the 103rd Regt.

FLOWER Lucius Leonard Flower [SRGP 85937], died at 7:15 oclock Saturday morning, Sept. 3 [1927], of heart disease. He was born at Newark Valley, October 28, 1842, the only son of Clara Hoagland and Lucius Leonard Flower. At the age of 19, on January 24, 1862, he enlisted in Elmira in the 103rd Regt. Surviving are his wife, Mrs. Edith Flower Wheeler, of Cortland, NY, formerly of Mansfield, and son, T. Albert Flower, of Painted Post. The funeral was held Monday; interment in Prospect cemetery at Mansfield. Wellsboro Agitator, September 7, 1927. FLOWER Lucius Leonard [SRGP 86433]. 1869 30 JUN D Flower, Lucius Leonard The following was abstracted from a letter to the Editor: Lucius Leonard Flower of Lamb's Creek, Pa. NY; eldest son of Alfred Flower of Feeding Hills, Mass. The first of a family of seven children to meet the sainted mother in heaven. God helps the wife, the only child, the sister and brothers. Letter dated May 19th 1869 and signed by Hattie L. ONE HUNDRED AND THIRD REGIMENT. At the time of the breaking out of the war there was a "commercial college" in the third story of the building on Water street opposite the Rathbun House, one of the teachers being William M.

During the latter part of the year 1861 this gentleman began to raise a company of young men, some of whom were connected with the school. Dudley, who had gone out with K.

Company of the Twentythird Regiment, being home on leave, assisted in the organization of the company and was made its first lieutenant. The company was mustered in as K Company, One Hundred and Third Regiment, Seward Infantry, Col.

Stage, Jacob Stage, Isaac N. Vallentine, William Van Houten, Joseph Wade, Herman H. Wager, James Ward, Fernando Wescott, George L. Whitney, Nathan Wood, Nathan W. Crosby is now living in Binghamton at an advanced age. Dudley was a brother of James T. Dudley, who was the junior member of the old bookselling firm of Preswick & Dudley, the successors of the older firm of Sickles & Preswick, and the predecessors of the later firms of Preswick, Morse & Co. Morse, Baker & Hall, and the present Morse, Hall & Loring. Lieutenant Dudley at the time of the breaking out of the war was in his brother's book store. He is now and has been for years in the Postoffice Department at Washington. Dudley died in the service at Hatteras, N. The family is a Chemung County family, the father, Ward Dudley, having been for years a resident of Horseheads. Other names of members of this company will be readily recognized as belonging to citizens of the county now in good repute and standing, among them ex-Alderman Hibbard and Emerson Orvis, of the Fifth ward, and Judge John A. The item "Rare Civil War Soldiers Chair 103rd Regiment New York Volunteers Seward Antietam" is in sale since Monday, March 22, 2021.

This item is in the category "Collectibles\Militaria\Civil War (1861-65)\Other Civil War-Related Items". The seller is "oxfordtradingpost" and is located in Oxford, Mississippi.