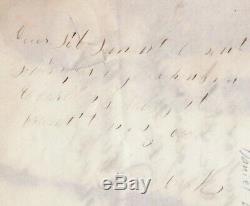 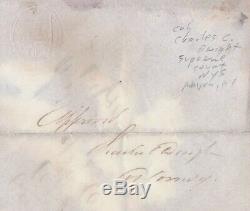 Vintage, Old, Original, Antique, NOT a Reproduction - Guaranteed! Headquarters, Department of the Gulf. Officer of the guard, pass Sergeant L.

If you collect 19th century Americana history, American military, battlefield, etc. This is a treasure you will not see again! Add this to your image or paper / ephemera collection. Important genealogy research importance too.

Duty at Bayou Boeuf and Pattersonville until April 2. Operations in western Louisiana April 9-May 14. Second Bayou Teche Campaign April 1120. Fort Bisland, near Centreville, April 1213. Expedition to Alexandria and Simsport May 518.

At New Iberia until January 7, 1864. Moved to Franklin January 7, and duty there until March.

Snicker's Ferry July 20. Sheridan's Shenandoah Valley Campaign August 7-November 28. Served detached as supply train guard for the army from August 14 to October 27. Duty at Middletown and Newtown until December, and at Stephenson's Depot and Winchester until April 1865. And duty there until June.

Grand Review of the Armies May 2324. Duty there and at various points in the Department of Georgia until November. The regiment lost a total of 219 men during service; 6 officers and 53 enlisted men killed or mortally wounded, 1 officer and 159 enlisted men died of disease.

It was historically a separate town, laid out in 1833 and incorporated on March 10, 1845. [2][3] Carrollton was annexed by New Orleans in 1874 (becoming the city's 16th and 17th Wards), but it has long retained some elements of distinct identity. During the American Civil War, Carrollton soon fell under Union control.

Winters in his The Civil War in Louisiana (1861), reports that soldiers in Carrollton were heavy whiskey drinkers. A young officer complained that one-fifth of the regiment keeps drunk all the time. [4] Post commander General John W.

Phelps permitted the men to drink because he thought that they must have whisky or die of country fever. Butler, from time to time, issued orders forbidding the public sale of liquor. Butler's brother, Andrew J. Butler, who held no official capacity, then petitioned his brother to lift the ban. Andrew Butler monopolized the liquor trade and brought cattle into the area from Texas and flour from the North. Winters describes Andrew Butler as a jolly, fat man who could be as hard as nails where a dollar was concerned. [He] quickly established a monopoly on all groceries, breadstuffs, medicines, and staples brought into [New Orleans].

He seized and operated a city bakery that was the only breadmaking establishment allowed in the city. [6] Many in New Orleans considered the Butler brothers "on the make, " and persons needing official favors were more likely to succeed if they were on good terms with Andrew Butler. The following is taken from New York in the War of the Rebellion, 3rd ed. Dwight received authority, September 6, 1862, to recruit this regiment in the then 25th Senatorial District of the State; it was organized at Auburn and mustered in the service of the United States for three years at New York city November 21, 1862.

It rendezvoused at Auburn, and was mustered into the U. Service at New York city Nov. 21, 1862, for three years. It left the state on Dec. 4, 1862, and proceeded to the Department of the Gulf, where it was assigned to the 2nd brigade, Augur's division, 19th corps.

Its first loss was met in the action with the gunboat Cotton in Jan. 1863, where I man was killed and 4 wounded; at Pattersonville in March, where Co. Jewett, was on board the gunboat Diana during the action with the Confederate batteries, it lost 6 killed and 16 wounded, Capt. At Fort Bisland its loss was 7 killed and wounded. It was later engaged at Jeanerette and Plain Store, after which it participated with credit in the long siege of Port Hudson, taking part in the general assaults of May 27 and June 14. Its loss in killed and wounded during the siege was 41.

A period of post and garrison duty followed the fall of Port Hudson, and in March, 1864, in the 2nd brigade, 1st (Emory's) division, 19th corps, it started on Banks' Red River expedition, engaging with heavy loss at Pleasant Hill, where its casualties were 41 killed, wounded and missing, at Sabine cross-roads, Cane river crossing and Mansura. In the former action its casualties were 15 killed, 61 wounded and I missing, and in the latter 66 killed, wounded and missing.

Van Petten received a bullet through the thigh at Winchester, but continued to bravely lead his men until the battle was over. He was subsequently promoted colonel of the 193d N. The regiment left the valley in April, 1865; proceeded to Washington, where it took part in the grand review in May; moved to Savannah, Ga.

In June; and under command of Col. Underhill was mustered out at Savannah on Nov. The regiment lost by: death during its term of serviced officers and 47 enlisted men killed and died of wounds received in action; I officer and 159 enlisted men died of disease and other causes; total deaths, 219. The American Civil War (also, known by other names) was a civil war that was fought in the United States from 1861 to 1865. As a result of the long-standing controversy over slavery, war broke out in April 1861, when Confederate forces attacked Fort Sumter in South Carolina, shortly after U.

The Confederacy grew to include eleven slave states. The Confederacy was never diplomatically recognized by the United States government, nor was it recognized by any foreign country (although the United Kingdom and France granted it belligerent status). The states that remained loyal to the U. (including the border states where slavery was legal) were known as the Union or the North. The Union and Confederacy quickly raised volunteer and conscription armies that fought mostly in the South over four years. The Union finally won the war when General Robert E. Lee surrendered to General Ulysses S. Grant at the Battle of Appomattox Court House, followed by a series of surrenders by Confederate generals throughout the southern states. Four years of intense combat left 620,000 to 750,000 people dead, more than the number of U. Military deaths in all other wars combined (at least until approximately the Vietnam War). [15] Much of the South's infrastructure was destroyed, especially the transportation systems, railroads, mills, and houses. The Confederacy collapsed, slavery was abolished, and 4 million slaves were freed. The Reconstruction Era (18631877) overlapped and followed the war, with the process of restoring national unity, strengthening the national government, and granting civil rights to freed slaves throughout the country. The Civil War is the most studied and written about episode in U. The item "RARE Civil War Pass Camp Carrollton New Orleans 160th NY Union Signed 1862" is in sale since Friday, December 13, 2019. This item is in the category "Collectibles\Militaria\Civil War (1861-65)\Original Period Items\Documents". The seller is "dalebooks" and is located in Rochester, New York.