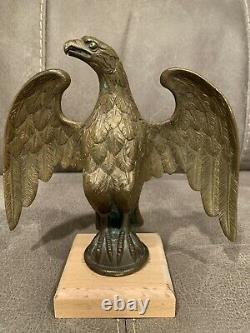 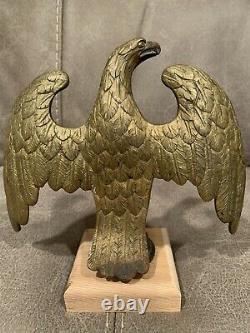 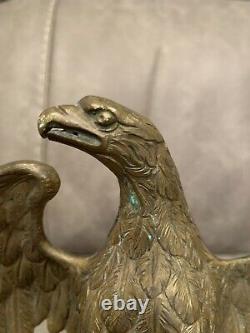 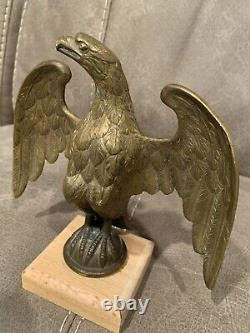 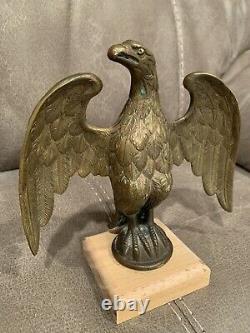 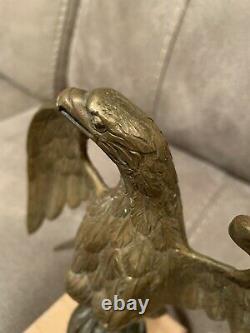 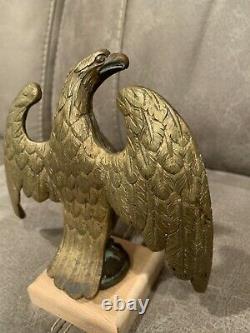 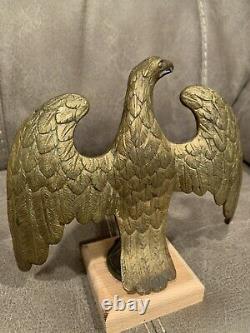 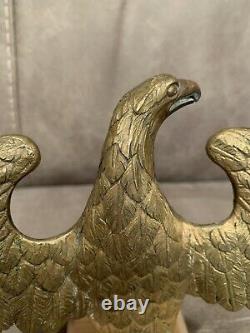 This is the only example I have seen with a open beak area and appears to be a solid one piece casting. The maker on this eagle is unknown at this time. It is very similar in details to the Cairns & Bros of New York pictured in Flagstaff Finials, Toppers, & Ferrules of the American Civil War. However this one has a different base and appears to be solid cast unlike this particular style. This one come from a New York estate and was likely used by an early New York Regiment. The eagle retains some of the original gold gilding and the eagle has aged well over the last 150 years. It shows period wear and carry polish with slightly tapered in bent wings from either being dropped in battle or bent intentionally to avoid snagging on overhead tree limbs. It measures a little over 6 inches tall by 6 3/4 inch wide and is mounted on a nice wooden base.

All in all a super nice one of a kind rare civil war relic! Per a state regulation, New York regiments were required to have a gilted eagle on all the flag staffs!

1858 NY Regulation: Article XXXIV. FLAGS, COLORS, STANDARDS, GUIDONSNATIONAL FLAG. Every pike-pole of staff to which the flags, standards, guidons or colors above provided are to be attached, will be surmounted with a gilt eagle. SOURCE: General Regulations for the Military Forces of the State of New York, 1858 Albany: Weed, Parsons & Co. I specialize in studying and researching these specific rare relics from the civil war and occasionally sell duplicates of ones I already have and sometimes thin down my finial collection... This is the only type of civil war relic I collect and specialize in and devote my time to researching. Civil war battle eagles and finials in general are one of the most misunderstood and unclarified relics, yet one of the most important and "symbols of freedom" of the civil war. To imagine how many lives were lost defending the flags and protecting these eagles, were a true symbol of sacrifice and the preservation of freedom during the Civil War. Based on the details of each individual eagle, can help to date each type and examples based on historic photo's, research, and musuem information. Unfortunately, most advanced civil war collections lack these pieces, due to the lack of knowledge on these rare relics of the war. Bullet artillery ames sword blade excavated insignia button kepi confederate union horstmann shell cannonball cannon fragment musket saddle uniform flag cannister knife officer scabbard 1850 1840 1860 field and staff photo buckle breastplate eagle, brass flag eagle, flag finial, bronze flag eagle, gilt eagle, spade finial, spear finial, flagstaff eagle dug CSA, dug, 1850 sword, artillery. The item "Rare Civil War Open-Beak Regimental Flagstaff Gilded Bronze Eagle Finial from NY" is in sale since Saturday, October 23, 2021. This item is in the category "Collectibles\Militaria\Civil War (1861-65)\Original Period Items\Other Civil War Original Items". The seller is "cahokianartifacts76" and is located in Lebanon, Illinois.