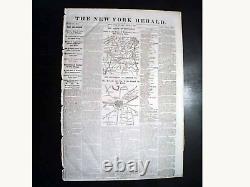 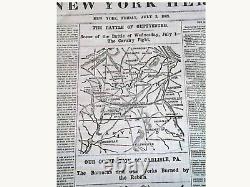 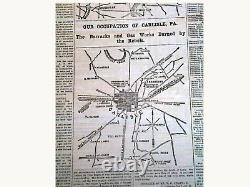 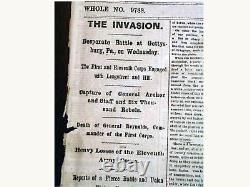 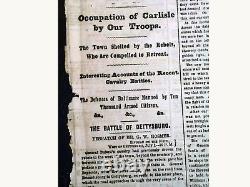 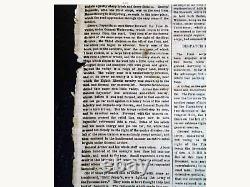 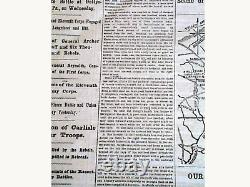 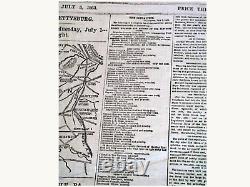 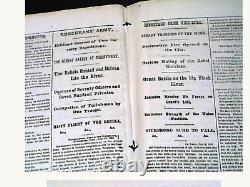 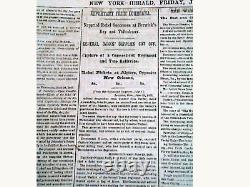 Scene of the Battle of Wednesday, July 1--The Cavalry Fight. " and the other headed: " Our Occupation of Carlisle, Pa. The Barracks and Gas Works Burned by the Rebels.

Features very nice first column heads: " THE INVASION " Desperate Battle at Gettysburg, Pa. On Wednesday" "The First & Eleventh Corps Engaged with Longstreet and Hill" "Death of General Reynolds, Commander of the First Corps" "Heavy Losses of the Eleventh Army Corps" "Reports of a Fierce Battle and Union Victory Yesterday" "Interesting Accounts of the Recent Cavalry Battles" "The Battle of Gettysburg and a bit more. Also has two-thirds of a column taken up with: "The Casualties" from the Battle of Gettysburg. There is additional Civil War reporting on the inside and back pages as well.

A great issue on Gettysburg, particularly with a nice map headed at the top with the words everyone wants to frame: "The Battle of Gettysburg". Eight pages, irregular at the spine margin from disbinding, with a few indents which affect some words.

Otherwise the issue is in nice condition. Comes with Timothy Hughes Certificate of Authenticity. This item is in the category "Collectibles\Militaria\Civil War (1861-65)\Original Period Items\Other Civil War Original Items". The seller is "whitinstamp" and is located in this country: US. This item can be shipped to United States.