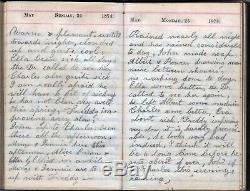 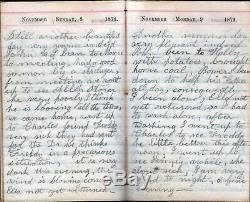 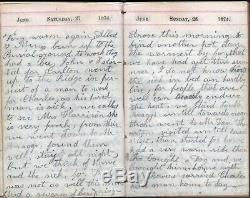 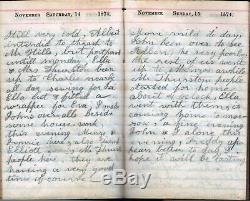 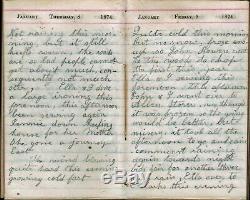 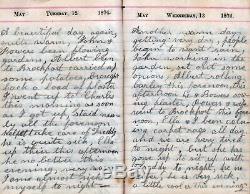 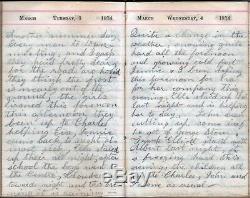 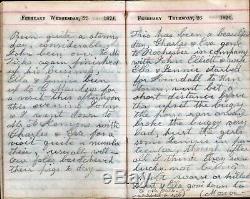 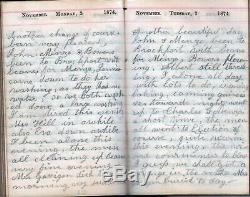 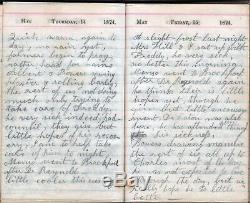 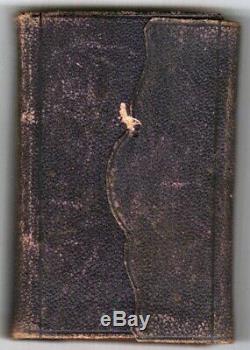 This Rare 145 year old diary was written. Just 9 years after the end of the American Civil War. Living in the small town of. Hamlin, Monroe County, New York. Storer on September 13, 1835 and they had five children: Charles Rudolph (deceased) Ella/Ellen Albert Menzo.

This diary really is awesome! Writes so many details of her daily life. Her entries brings the reader right back to 1874.. For many months the entire family is worried about little Freddy, her grandchild.

Family & friends stay up watching him around the clock for many weeks. Their emotions on a roller coaster as one day he's horrible and the next day he's a little better, then he crashes again... Even the doctors had no idea how to help him. Did he live or die? You're going to need to read the diary to find out! Perhaps one of the best ways to describe a diary is by taking excerpts from it. I never saw a finer day for New Years day, beautiful wheeling and very mild. All at home until evening, Albert & Ella, Menzo & Jennie went to the Creek to a party of course.... Eleven years to night since Rudolph died. John & Bowers been to Holly with beans, went with sleighs, the first loads drawn on runners this winter. I have been up to Charles helping the girls take off their comfortable's this evening.... We got a quilt on this morning. Hill came up and helped us quilt all day.... Lib Clark in awhile, she & Ella & Jennie each bought a picture of a one armed pedlar.... Ella & Jennie started for Kendall to Wm Storers, went but a short distance before they upset the buggy. The horse ran away, broke the buggy very bad, hurt the girls some. Jennie in particular, though after all I think they were lucky, not being hurt worse or killed.... Jennie sat up with Mrs. Cornall last night, she very sick. It has snowed all day without cessation, but thawing nearly as fast as it came, nothing done of consequence but getting Menzo moved and settled. Ella started to help them, but was taken with Neuralgia and has been laid up of course.

Menzo & Jennie have finally started house keeping, stay at their home to night for the first, they are now begining the realities of life, good luck to them, may they live happy.... Ella & I been coloring carpet rags all day and we are very tired to night, but she has gone up to sit with Freddy to night, he no better, he is very sick....

Albert & Bowers sowing plaster & rolling barley, the rest of us not doing much, only trying to take care of Freddy. He very sick indeed, had council, they give but little hopes of his recovery. Mrs Hill & I sat up with Freddy, he very sick, no better this morning.

Menzo went to Brockport after Dr Reynolds again, he thinks their is little hopes yet, though he gives but little encouragement. Dr Eaton was also here, he has attended him through his sickness - All went up to Charles most of the day. He was not expected to live through the day.... John sat up with Freddy last night, he no better.

They sent down for us about 8 o'clock, thought he was dying but he revived. He was very sick all day.... John & I sat up with Freddy again last night. Freddy appears better today, whether it will be lasting is a matter of doubt, I hope he really is better.... Towards night went up to see Freddy.

He appears quite smart though he is bloated badly, he can not stand on his feet at all.... Freddy worse again, they went for the Dr. In the night, and sent again this afternoon. He is looking very bad, does not look as though he could live until morning....

John & I went to Brockport to attend the funeral of Mrs. Baker from Richmond, but bringing her so far, they were obliged to bury her last night....

Another hot day, the warmest by far that we have had yet this summer. I do not know how the sick in bed can hardly live, for people that are well can scarcely endure the heat....

Went up to see Jennie, she sick today, had a chill & fevers this morning, rather rough for her with six men to take care of, her Mother has been up there most all day trying to Doctor her up... Last night Menzo came down about 10 o'clock almost crazed with toothache, we doctored him until morning, than Charles carried him to Brockport, he had it out...

Albert went down this morning to help C. Clark thresh, worked but a short time before he had one of his arms hurt pretty bad, I'm afraid it will be some time before he can use it much....

John & Albert been to Holly & Brockport. I alone so I went up to Charles awhile. Freddy not feeling quite as well.

Will he be here a year from now? Will any of us be here? Probable some of us, but who, their are some dropping daily. Our turn will be by and by, every day brings us closer to home....

This diary has on the front end page is written in faint pencil " Christmas present from Jennie". There are handwritten remedies & recipes on the inside of the covers &. A cure for a toothache; recipe for washing black calico in boiling water; remedy for Croup; recipe for Rheumatic Liniment remedy; recipe for "silver top"; and a recipe for "Gem Cake". There are 365 daily handwritten entries, and it measures approx. Good condition, typical scuffs on covers, no loose or missing pages. I will include Mary's census info from 1875. Fabulous look into family life 145 years ago! These good 19th century gems are getting tough to find! The item "RARE 1874 HANDWRITTEN POST CIVIL WAR DIARY MUCH SICKNESS HAMLIN MONROE NY" is in sale since Thursday, October 3, 2019. This item is in the category "Books\Antiquarian & Collectible". The seller is "bubbasmomm" and is located in Holland, Michigan. This item can be shipped to United States.