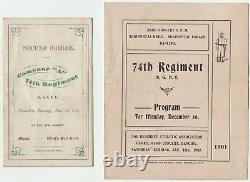 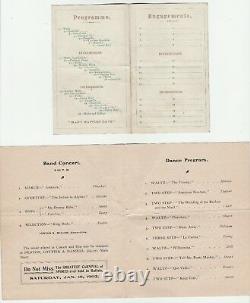 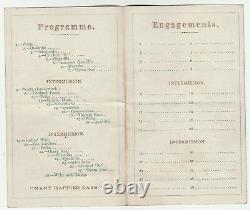 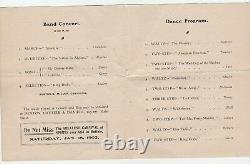 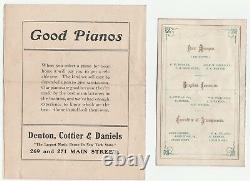 Vintage, Old, Original, Antique, NOT a Reproduction - Guaranteed! The first one is is early, and is the second Soiree for Company A. The other one is dated 1901. Both in good to very good condition.

The larger one has a couple small rips at bottom edge, and fold mark - nothing too major. If you collect 19th / 20th century Americana history, American Fraternal, military, etc. This is a treasure you will not see again! Add this to your image or paper / ephemera collection. Important genealogy research importance too.

The 74th New York Volunteer Infantry Regiment was a Union regiment recruited in 1861, during the American Civil War. The regiment was part of Sickles' Excelsior Brigade and their first commander was sailor and engineer Col. The regiment participated in the Peninsula Campaign of 1862 and was particularly noted for its part at the Battle of Williamsburg. It was also present at the battles of Fredericksburg, Chancellorsville, Gettysburg and the Overland Campaign.

Four members of the regiment were awarded the Medal of Honor for their actions at the Battle of Chancellorville in May 1863, for volunteering to advance on Confederate lines under heavy fire and bring back information: privates Felix Brannigan and Joseph Gion, Corporal Gotlieb Luty, and Sergeant Major Eugene P. Their uniform was patterned after French infantry known as chasseurs. Companies A and B however, wore a uniform modeled on the Zouaves. It consisted of a dark blue Zouave jacket with yellow trimming, a dark blue Zouave vest with yellow trimming, a sky blue sash, a red Zouave cap fez with a yellow tassel, red pantaloons with yellow trimming, deerskin jambières, and white gaiters made from canvas or drill (fabric). The uniforms of these two Zouave companies were directly patterned after those worn by the Imperial Zouaves of France, being closer to the originals than any other Zouave style uniform worn by American Zouaves in the Civil War. Mustered in: June 30 to October 6,1861. Mustered out by companies: June 19 to August 3, 1864. The following is taken from New York in the War of the Rebellion, 3rd ed. This regiment was recruited under the special authority of the War Department, issued to Gen.

Graham at Camp Scott, L. And mustered in the service of the United States for three years between June 30 and October 6, 1861.

Pursuant to the orders of the Secretary of War of December 5, 1861, it received its State numerical designation December 11, 1861. August 3, 1864, the remaining men, not entitled to be discharged with their respective companies, were assigned to the 40th N. Volunteers, forming new Companies G and H of the latter. The companies were recruited principally: A, and B U. Zouave Cadets in part, at Pittsburgh, Pa.

Company D, June 19, 1864; A, June 21; B, June 26; G, June 28; C, July 6; and E, F, H, I and K, August 3, 1864. During its service the regiment lost by death, killed in action, 6 officers, 82 enlisted men; of wounds received in action, 3 officers, 33 enlisted men; of disease and other causes, 2 officers, 68 enlisted men; total, 11 officers, 183 enlisted men; aggregate, 194; of whom 10 enlisted men died in the hands of the enemy. The following is taken from The Union army: a history of military affairs in the loyal states, 1861-65 -- records of the regiments in the Union army -- cyclopedia of battles -- memoirs of commanders and soldiers. Burtis, Thomas Holt, William H. The 74th, the 5th regiment of the Excelsior brigade, which contained many members of the l5th militia, was recruited at Pittsburg, New York city, Cambridgeport, Mass. And Long island and mustered into the U. Service at Camp Scott, L. 6, 1861, for a three years' term. It left New York Aug. 20, for Washington; was attached to Sickles' Excelsior brigade and stationed along the Lower Potomac in Maryland during the first winter; embarked in April, 1862, for the Peninsula with the brigade, as part of the 2nd division, 3d corps; shared in the siege operations before Yorktown; took a prominent part in the battle of Williamsburg, for which the brigade won the highest praises, the loss of the regiment in this bat-tle being 143 killed, wounded or missing, and in the ensuing engagements of Fair Oaks and the Seven Days' battles it was constantly in action.

Upon its withdrawal from the Peninsula in August, the regiment was sent to the support of Gen. Pope at Manas-sas, after which it retired to the defenses of Washington. On the southward march it encountered the enemy at Wapping heights and Kelly's Ford; fought at Locust Grove during the Mine Run campaign, and went into winter quarters with the brigade.

In April, 1864, the Excelsior brigade became the 2nd brigade, 4th division, 2nd corps and in May the 4th brigade, 3d division, 2nd corps. With it the 74th fought through the Wilderness campaign and was mustered out before Petersburg, from June 19 to Aug.

The reenlisted men and recruits were transferred to the 40th N. The regiment lost during its term of service 124 by death from wounds and 70 from other causes.

It was noted for its courage and steadiness and is numbered among the three hundred fighting regiments. Nearby towns in Erie COunty. The item "RARE- 1870 & 1901 Programs 74th NY Civil War Regiment Buffalo New York GAR" is in sale since Thursday, December 14, 2017. This item is in the category "Collectibles\Militaria\Civil War (1861-65)\Civil War Veterans' Items".