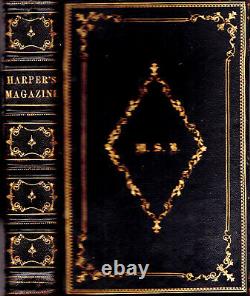 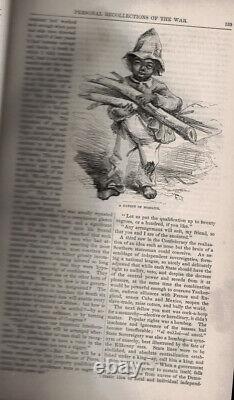 From 1866, right after the Civil War, this is a wonderfully fine binding leather-bound volume of Harper's Monthly, as published by Harper & Brothers, New York. Sized 10x8 inches, with a remarkably great fine leather binding. Sized 10x8 inches, ABOUT 1000 PAGES.

Although this has a title page referring to issues from June to November 1866, it actually contains issues from July to December. And that's great because that means it contains Mark Twain's first appearance in a book, Forty-Three Days in an Open Boat. Interestingly, in the original appearance in the magazine (before binding), Twain's name was misspelled as Swain, he was hardly known.

Army Life on the Border. The serial run of Armadale by Wilkie Collins. Education of the Colored People of Louisiana. The Central Park of New York. Florida, Her Crime and Punishment, by J.

The Mississippi River by John F. The Reese River Country by J. The Freedman's Story by M. Texas Lost and Won, by J. The Work House at Blackwell's Island, New york.

According to a blog post, In retrospect, 1866 was a watershed year for Samuel Langhorne Clemens. "Forty-three Days in An Open Boat, " published in Harpers New Monthly Magazine in December of 1866, was the first of his works published on a national scale.

Twain, eventually regarded as one of the nations greatest satirists, was named the "father of American literature" by William Faulkner. With "Forty-three Days in An Open Boat, " Twain transcended the limitations of small, local presses, and gave national audiences their first glimpse into the forthcoming corpus of a major American writer.

The Hornet caught fire sailing from New York to San Francisco and scattered its crew amid three small life boats with a mere ten days' worth of provisions. While the most harrowing descriptions found in the piece dont come from Twains pen, he handles his role with an easy grace and a sense of authority. This authority is undercut only slightly by the fact that the then-obscure authors by-line read Mark Swain.

While it would no doubt be folly to portray Twains early article as a landmark of his oeuvre, the piece lends insight into his development as a writer and a thinker. For instance, Twain characterizes the stroke of luck that enabled the sailors to make land on the morning of their 43rd day as being an eloquent witness of the watchful presence of an all-powerful providence.

This description adds a compelling data point for tracing the authors fraught relationship with religion. It prompts us to wonder whether, based on his later-in-life insistence that faith is believing what you know aint so, we ought to believe that the man had grown into atheism after a period of belief, or whether the acclaimed satirists comments are underpinned by an overarching deist philosophy. Perhaps more importantly, Twains commentary on the crews journals includes an aside about his refusal to let the writers "doctor" their accounts. While his decision had, on the one hand, the effect of maintaining the poetic purity of the narrative, it also led to the inclusion of a mutiny-plot concocted by some of the eventual survivors. That Twain included this material against the wishes of the would-be mutineers speaks volumes about the fundamental commitment to the truth that underlies works like The Adventures of Tom Sawyer (1876) and Adventures of Huckleberry Finn (1884).

If "Forty-three days in An Open Boat" tells us anything about Mark Twains legacy, its that the connecting thread between his satire, journalism, and borderline science-fiction as in A Connecticut Yankee in King Arthurs Court (1889) is the legendary authors unrelenting commitment to portraying all aspects of society, even the least flattering. The item "RARE 1866 FINE LEATHER MARK TWAIN 1ST MELVILLE CIVIL WAR GETTYSBURG ENGRAVINGS" is in sale since Thursday, October 1, 2020. This item is in the category "Books & Magazines\Antiquarian & Collectible".

The seller is "antiquebookcentral" and is located in Fernandina Beach, Florida. This item can be shipped worldwide.