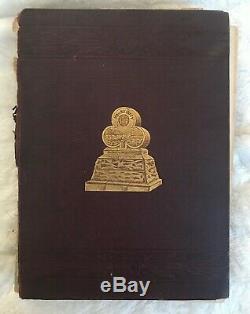 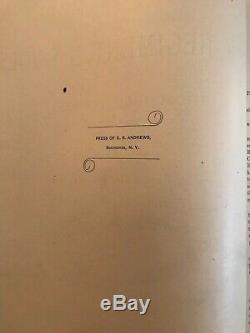 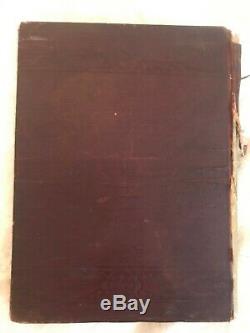 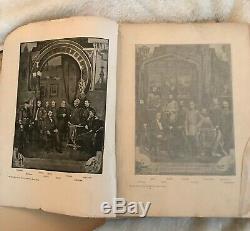 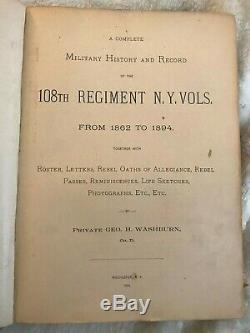 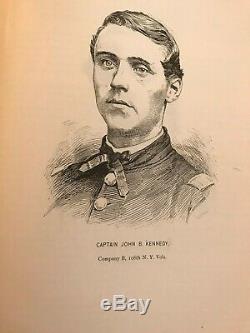 Washburn 18941st editionLOADED with History and Illustrations! For offer - a very rare American military book. One of the rarest histories - a hard book to find. Original, vintage, old, NOT a Reproduction!

Society, with bookplate, embossed t. NOTE: Looks better than shown below. If you collect Americana, United States of America history, 19th century America history, army, Civil War soldier, New York State military, Grand Army of the Republic, GAR, Monroe County, NY Rochester, Irondequoit, Brighton, Webster. This is a nice item to add to your antique book library or paper ephemera collection. The following is taken from New York in the War of the Rebellion, 3rd ed. Williams was authorized July 10, 1862, as Colonel, to recruit this regiment in Monroe county; Col.

Palmer succeeded him July 28, 1862; the regiment was recruited and organized at Rochester, where it was mustered in the service of the United States for three years August 16-18, 1862. The men not to be discharged with the regiment were, in May, 1865, transferred to the 59th Infantry.

The regiment left the State August 19, 1862; served in Whipple's Division, Defenses of Washington, D. C, from August, 1862; in 2d Brigade, 3d Division, 2d Corps, Army of the Potomac, from September 6, 1862; in the 3d Brigade, 2d Division, 2d Corps, from March, 1864; and it was honorably discharged and mustered out, under Col. Powers, May 28, 1865, at Bailey's Cross Roads, Va. During its service the regiment lost by death, killed in action, 7 officers, 64 enlisted men; of wounds received in action, 2 officers, 42 enlisted men; of disease and other causes, 90 enlisted men; total, 9 officers, 196 enlisted men; aggregate, 205; of whom 18 enlisted men died in the hands of the enemy. The following is taken from The Union army: a history of military affairs in the loyal states, 1861-65 -- records of the regiments in the Union army -- cyclopedia of battles -- memoirs of commanders and soldiers. One Hundred and Eighth Infantry. The 108th regiment was recruited and organized at Rochester, where it was mustered into the U. Service for three years, Aug. It left the state the following day, and served in the defenses of Washington, until Sept. 6, when it was assigned to the 2nd brigade, 3d division (French's), 2nd corps, and engaged in its first battle at Antietam.

The new regiment suffered a loss in the battle of 30 killed, 122 wounded and 43 missing. Its next battle was at Fredericksburg, where Gen. Couch commanded the corps, and the regiment again suffered severely, losing 92 in killed, wounded and missing. Its loss at Chancellorsville was 52, Gen. Hancock being in command of the corps and Gen.

At Gettysburg, where the regiment again met with a severe loss on the second and.. The item "RARE 108th NY Civil War History Book 1894 Rochester NY" is in sale since Monday, January 13, 2020. This item is in the category "Collectibles\Militaria\Civil War (1861-65)\Books".

The seller is "crazyworker27" and is located in Rochester, New York. This item can be shipped worldwide.