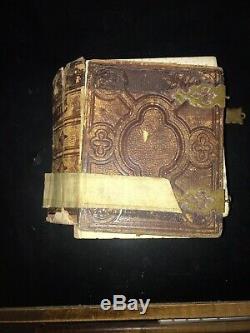 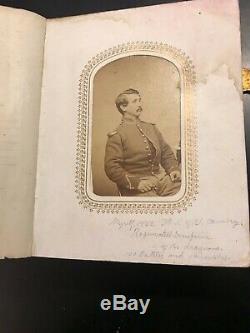 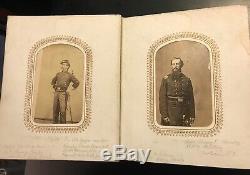 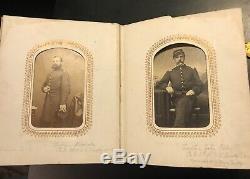 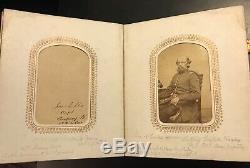 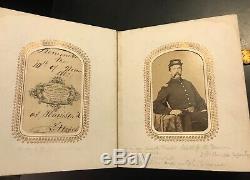 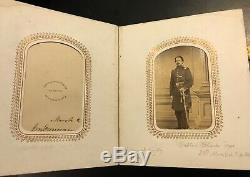 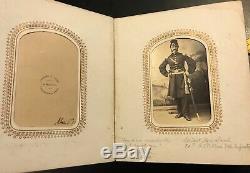 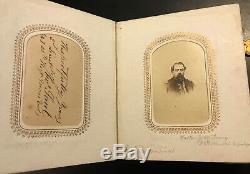 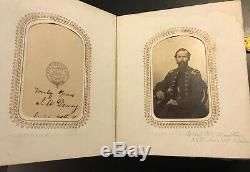 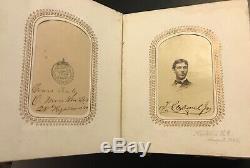 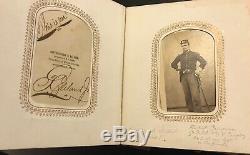 For You To Consider Now. DO NOT JUDGE THIS BOOK BY THE COVER! We are soliciting offers on this. We are working on uploading the rest of the images via a hosting service since. But please know there are 32 photographs in -30 are CDV, 2 are tin types. FOR NOW - You can view all of these photos on our Facebook page. Original Civil War Book of 32 CDV & Tin type Photos Photographs Soldiers. This is simply put, a SPECTACULAR piece of history. If you judge this book by it's cover, you will miss a huge opportunity of the greatness within. A recently discovered plethora of information about Union Soldiers in this personal photograph book. It appears the majority of the individuals in this book were from the New York and Massachusetts Volunteer Regiments. This Civil War book not only has photographs of multiple Union soldiers, it also gives names, units and other information. At least two of the CDV photographs are marked as Brady Photographs - From the well known Civil War photographer, Matthew Brady.

Ironically the original owner didn't write his own name in the book. But when you peruse through this you definitely get a feel for the man he was and his love of documenting his friends and colleagues in both photo and a few words. This historical gold mine could be a great subject for a book about the unidentified soldier - and perhaps the new owner will research enough to identify him. There are likely stories within stories here to be dug out. We have struggled to find any comps on this book at all.

But what is it worth as one collection? We can't separate this one because there is so much written in the book on both sides. We think it is worth somewhere between these two numbers but we want the potential buyers to sort this out. Tell us why you think it's worth what your offer is and we just may accept it.

Here is a documentation as best that I can of the writing that is inside this book. The First Photo The owner of the book is the first photograph and he simply says Myself - 1862 3rd NYV Cavalry Regumental Uniform of the Dragoons 100 Battery and Skirmishes. Photographer marked Brady - As in Matthew Brady - the famous photographer. The Second photo Identifies Myself - The old bugle was for signals I could blow a call louder than any other in the Regiment to be heard for miles - North Carolina 1862-3-4 18th Army Corps Uniform Dress Parade. Third Photo - "Col Stewart Charley 43rd NY Artillery New Berne NC - 3rd Artillery 18th Army Corps". Fourth Picture Captain Moschelle Co B 3rd nYV Cavalry 61-62? Fifth Photo- "Captain John Ebbs Co B 3rd NYV Cavalry 62-3-4 Wounded at Nattoway Bridge - Dead". Sixth Photo One of Goethes Admirs - Captain Leopold Wagebig Co S 25th Mass Infantry - Remember Schillers Birthday 10 Nov 1862 we? " - Writing on the back of this photo I can't make it all out Without removing it - "At Garrison? 7th Photo A sincere Friend trusted him in the eighties later Citz Marshall Manchester Mass and Col Drennan - Laren J M Drennan - 25th Mass Vol Infantry. More writing on the back.

Tom, do you remember the dog I saved you Templeton Mass. Back has writing on it. 10th Photo - Captain J W Denny 25th Mass Vol Infantry - One of the 6th Mass that first responded.

12th Photo Newberne NC August 1865 NOT in Uniform Back says This is ME - Critcherson & Leland Photographer - Signed front looks like T Cleveland Jr? - back looks like his signature also - not sure of name. 13th Photo - Robert Cameron CO B 3rd NY V Cavalry NO 2 at my left in the front - A conferred student where is he now!

20th Photo A W Ward - Artemus Sutter 25th Mas Vol Infantry, A Christian Jovial and true. Dead - We are the ghosts of other days. Writing on back Whitney & Paradise photographer. 21st Photo Lieut Stratton 25th Mass Vols - His wife was the one who at Dr Hoyts Tent hurts was preeminent Vide by Album. HJ Reed Photographer - Writing on back. 22nd Photo - Lieut Tom? 25th Mass Vol Infantry - Captain Dennys Co - A memory Holly old Lew one of the forgotten ones except by me. 23rd Picture - Clark Sutler? 25th Mass Vol - in plain clothes.

30th Photo - Tin type - Myself 1862 One of three? Of the 3rd NY V Cavalry Served three years Regimental Uniform From August 1st 1861 to August 1st 1864. Photos 31 & 32 do not. Have anything to identify them but may fill into some of the empty slots mentioned. The item "Original Civil War Book of 32 CDV & Tin type Photos Photographs Soldiers NY MA" is in sale since Wednesday, December 18, 2019.

This item is in the category "Toys & Hobbies\Outdoor Toys & Structures\Pedal Cars\Pre-1970". The seller is "antiquesnorthstar" and is located in Lowell, Michigan.

This item can't be shipped, the buyer must pick up the item.