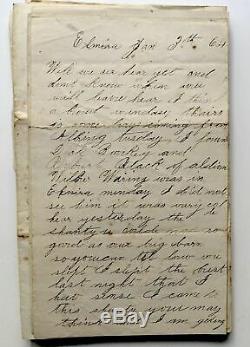 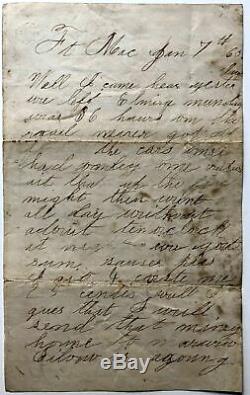 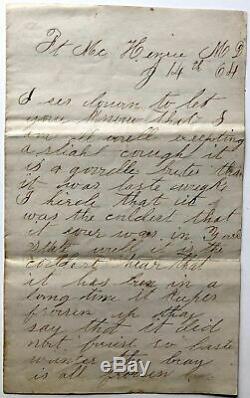 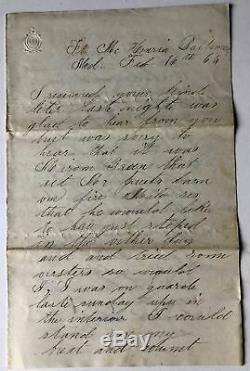 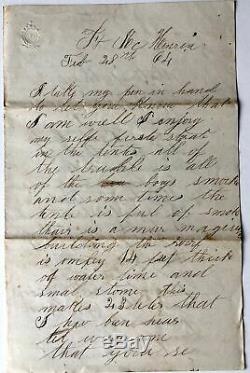 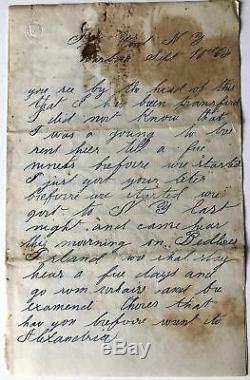 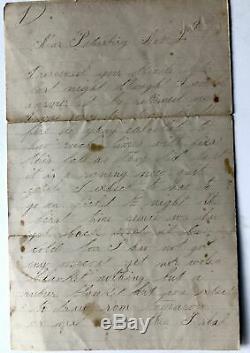 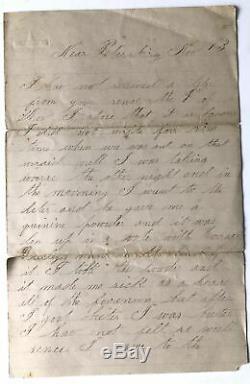 Description: 25 full letters, plus a handful of fragments -- single pages that we can't match up. Most of the letters are written on stationary folded once to make 4 pp.

There is also a membership card for GAR David Jones post 298, Kendall NY, dated 1884, so we know that he survived the war and came back to his home territory. The 8th Reg't Co.

K mustered out of Rochester; we don't know when Shaw was mustered in, but the letters begin in early January with him nursing a wound -- a musket ball had traveled through both of his legs, leaving holes in them. This does not prevent the army from transferring him to Fort McHenry in Baltimore, where he was stationed for some months, from January to September, 1864. In September, he left for Petersburg, VA and saw quite a lot of action there.

The letters end in mid-November, 1864. For the most part the letters are legible and decipherable, once one gets the hang of his eclectic spelling. Most of the letters are from his stay at Ft. McHenry, which served as a miitary prison during the Civil War, not only for Confederate soldiers but for southern sympathizers among the Baltimore elite the mayor and chief of police were put there... And Union soldiers and officers who had either deserted or were accused of some other infraction. Shaw reports that there were 130 soldiers like himself that had guard duty over the prisoners. For the following selection of quotations, we've cleaned up the spelling...

5: I was guard over the Union prisoners, my orders were to positively not let move about and to quiet all fuss with a piece of coiled lead. 16: I was on guard last Sundayt up in the interior. I could stand on my seat and count over 35 cannons and each cannon had 97 balls and several rounds of grape and canister -- canister is a pale holding some few quarts and filled with small balls... MARCH 19: [discussing the contents of his knapsack]...

And our clothes on the inside and our cartridges boxes with 20 rounds [in it] and our cap boxes and our canteens and our haversacks and I tell you it was pretty hard,,, MARCH 24: we was paid last Tuesday and I was on guard yesterday and I could not send it home so waited until today. I stood for them today. I got a present for Wilbren, I will send it in a day...

APRIL 9: [describes a long trip around Baltimore that ends at Kent Island, between Annapolis and the Eastern Shore]... Then we landed on Kent Island in Queen Anne's Co. Md this is on the eastern shore of the state and we went up to the nearest house and the man was not to home, so we went down in the darkies' room and one of the boys asked the darkie what kind of a man their master was and he said the he was a very wicked man for he did not belong to the Methodist, then soon his son came and showed us in the parlour a large room, it was not furnished, there was a large fireplace in it and we stayed there untill Wednesday morning and then went to the school house about a mile and a half out.

I went and see a wind mill for grinding corn, well we stayed there (to the school house) until the next day morning, then we came back to the place where we landed; Mr. And got all of the Oysters that we could eat; I ate so many last night that I could not breathe... I tell you that we look nice when we all get out on dress parade ; we have dress parade every night at five o'clock. Then we have to dress up in our best and black our boots and... There is a regiment of heavy artillery in Baltimore (darkies I mean), they are dressed the same as we are. We have been under fire of the rebels, we expect to be in a fight before tomorrow night, but I haint afraid of them. [There is a break in the continuity here and writing resumes from Fort Wood -- on Bedloe's Island in NY Harbor, the site of the Statue of Liberty]. We stay here a five days and go some where, and be examined. Those that have gone before went to Alexandria. ,, I can't straighten my leg and the doctor says it never will be straight, so you need not be scared about my being sent to the front.

SEPTEMBER 12: Here we are in gunshot of NY City and what a nice bread we have, it is the soft side of a hard bread with nothing under us, and nothing over us but a rubber blanket. I have got in with a man by the name of Mills, he is in the 81 Williamstown Oswego Co. O what a good grub we have, hard tack and cold beef and water, won't that make a man fat, well when I was to home and went up to Mr. I expect to go tomorrow... OCTOBER 4 (Near Petersburg VA): We have been moved to the front, I have just come in from picket, we was no more than 20 rods from the johnnies, we kept shooting all night and in the morning we told them we wanted to get some coffee and so we stopped shooting and so did they and we got up a wall and sat all around and so they they and some of the boys asked themn if they did not want to some soft bread and coffee for tobacco; they said that they had bread and coffee aplenty and one of them held out a loaf of bread.

I have no cold, but my feet are wet all of the time and in makes my legs sore... OCTOBER 29: At noon we started for our left line and marched till 8 o'clock at night, and stayed there till 4 the next morning, then started and marched till morning, and then had a fight with the Johnnies and broke their lines and marched into their lines for as many as 5 miles, and then we met the enemy again and of all of the fighting that was the greatest: we would take a place and then they would try to take it again. We took a large white house and the boys got lots of stuff in it. There was 4 barrels of flour, 3 barrels of molasses and a lot of cider and tobacco and most everything that you could think of. Rarebookstore is a long-established store specializing in used and rare books in all fields, ephemera, photography, and the occasional painting.

Please bookmark us as one of your "favorites" -- we enter new items all the time. This listing was created by Bibliopolis.

The item "NY Orleans County / 25 original Civil War letters from William Shaw 8th Cav" is in sale since Sunday, April 19, 2020. This item is in the category "Books\Antiquarian & Collectible". The seller is "rarebookstore" and is located in Pittsburgh, Pennsylvania.