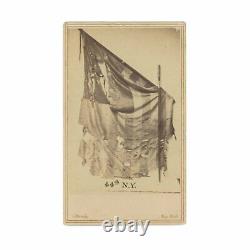 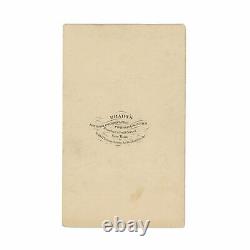 Pictured in this Mathew Brady CDV is the remnant of the tattered national colors of the 44th New York. According to an entry in. The Pictorial Battles of the Civil War. Twelve of the regiment's standard bearers had been killed and eighteen others wounded while carrying it in battle. The carte is in excellent condition with minor corner wear.

Bradys imprint appears on the reverse. The regimental history that follows appears in. THE UNION ARMY: A HISTORY OF MILITARY AFFAIRS IN THE LOYAL STATES, 1861-65. Chapin, Freeman Conner, Edward B.

Stryker, James McKown, Edward P. The 44th regiment, known as Ellsworth's Avengers, was organized at Albany under the auspices of the Ellsworth association of the State of New York, which planned to raise a memorial regiment to be composed of one man from each town and ward, unmarried, not over 30 years of age or under 5 feet, 8 inches in height, and of military experience. This plan was adhered to as far as possible and two companies from Albany county, two from Erie county, one from Herkimer county, and a large number of scattered squads reported at Albany in response to the request.

These companies were mustered into the service of the United States at Albany in Aug. 1861, for three years, and two new companies from Albany were mustered in Oct. The regiment, numbering 1,061 men, left Albany on Oct.

21, 1861, for Washington and upon its arrival there was assigned to the 3d brigade, 1st division, later with the 5th corps. Camp was established on Oct. 28, at Hall's hill, Va. From May 5 to 19, the 44th garrisoned Fort Magruder; then moved to Games' mill; was engaged at Hanover Court House, with the loss of 86 killed, wounded and missing; participated in the Seven Days' battles with a total loss of 56 at Gaines' mill and 99 at Malvern Hill, out of 225 engaged in the last named battle.

Returning to Alexandria, the regiment moved by way of Fortress Monroe to Manassas, and in the battle of Aug. 30 lost 71 killed, wounded or missing. In June, the veterans of the 14th and 25th N.

Were added to the 44th. At Gettysburg the regiment was posted on the left of the line and joined in the defense of Little Round Top, where it met with its greatest loss111 killed, wounded and missing. After spending some weeks in camp at Emmitsburg, the command was present at the battle of Bristoe Station, active at Rappahannock Station and in the Mine Run campaign, and went into winter quarters at Brandy Station. 1863, a large number of the men reenlisted and rejoined the regiment in camp after their veteran furlough.

May, 1864, was the month of the memorable Wilderness campaign, in which the regiment served faithfully, suffering most severely at the Wilderness and at Bethesda Church. By this time the regiment had become greatly reduced in numbers by hard service and the loss in this campaign, while not so large in numbers as in previous battles, was even greater in proportion to the number of men engaged.

The regiment was active in the first assault on Petersburg in June, 1864, at the Weldon railroad, and at Poplar Spring Church. 11 , 1864, the 44th was mustered out at Albany and the veterans and recruits were consolidated into a battalion, of which 266 men were transferred to the 140th and 183 to the 146th N. The total strength of the regiment was 1,585, of whom 188 died during the term of service from wounds received in action, and 147 died from accident, imprisonment or disease. The total loss in killed, wounded and missing was 730.

The men chosen for this command were of the flower of the state and displayed their heroism on many a desperately contested field, where they won laurels for themselves. Fox numbers the 44th among the three hundred fighting regiments. Please see my other items for more Civil War CDVs.