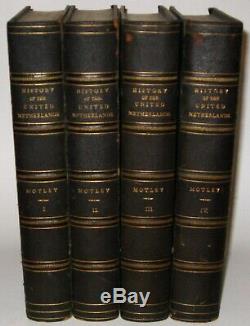 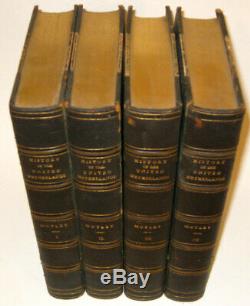 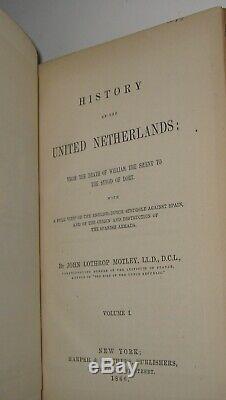 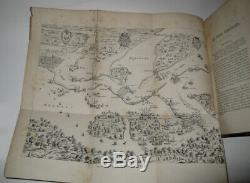 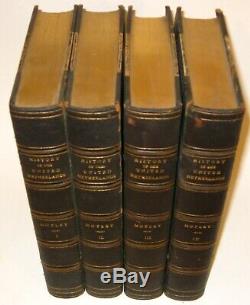 HISTORY OF THE UNITED NETHERLANDS. Complete in 4 large volumes. The History was first printed in 2 volumes in 1860. 2 additional volumes were added to the History in 1866. This is the FIRST AMERICAN EDITION of the complete 4 volume set.

History of the United Netherlands: From the Death of William the Silent to the Synod of Dort. With a Full View of t. He English-Dutch Struggle Against Spain, and of the Origin and Destruction of the Spanish Armada. In 1846, Motley had begun to plan a history of the Netherlands, in particular the period of the United Provinces, and he had already done a large amount of work on this subject when, finding the materials at his disposal in the United States inadequate, he went with his wife and children to Europe in 1851.

The next five years were spent at Dresden, Brussels, and The Hague in investigation of the archives, which resulted in 1856 in the publication of The Rise of the Dutch Republic, [citation needed] which became very popular. [citation needed] It speedily passed through many editions and was translated into Dutch, French, German, and Russian. In 1860, Motley published the first two volumes of its continuation, The United Netherlands. [citation needed] This work was on a larger scale and embodied the results of a still greater amount of original research. It was brought down to the truce of 1609 by two additional volumes, first published in 1866. John Lothrop Motley (April 15, 1814 May 29, 1877) was an American author, best known for his two popular histories The Rise of the Dutch Republic and The United Netherlands. He was also a diplomat, who helped to prevent European intervention on the side of the Confederates in the American Civil War.

Printed just after the American Civil War. This set was first printed in 2 volumes in 1860. These are large and heavy books. Measuring 9.5 inches tall. Bound in the original leather bindings.

These are large books measuring 9 1/2''. Harper & Brothers, Publishers, New York. This is an exceedingly early set. The First Edition was 1860. This set is still bound in the original bindings from 1866. In very good condition despite the age, with some abrasions along the extremities. All hinges fully attached, with some abrasions along the hinges. The spines seem lightly dry. Light general rubbing along extremities and hinges. Printed on quality paper, and is very clean. Free of writing or signs of ownership. This is a complete four volume set. Includes fold-out map, frontispiece, and an index. These will be well protected. In 1861, just after outbreak of the American Civil War, Motley wrote two letters to The Times defending the Federal position, and these letters, afterwards reprinted as a pamphlet entitled Causes of the Civil War in America, [7] made a favourable impression on President Lincoln.

[citation needed] At this point the English census of 1861 confirms that he was living with his wife and two daughters at 31 Hertford Street, in the parish of St George's, Hanover Square, London and describing himself as an'author - history'. [8] Partly owing to this essay, Motley was appointed United States minister to the Austrian Empire in 1861, a position which he filled with distinction, working with other American diplomats such as John Bigelow and Charles Francis Adams to help prevent European intervention on the side of the Confederacy in the American Civil War. He resigned this position in 1867. [9] Two years later, he was sent to represent his country as Ambassador to the United Kingdom, but in November 1870 he was recalled by President Grant.

Motley had angered Grant when he completely disregarded Secretary of State Hamilton Fish's carefully drafted orders regarding settlement of the Alabama Claims. [10] After a short visit to the Netherlands, Motley again went to live in England, where the Life and Death of John Barneveld, Advocate of Holland: with a View of the Primary Causes and Movements of the Thirty Years War appeared in two volumes in 1874.

The item "LEATHER SetUNITED NETHERLANDS! First Edition 1866 States American Civil War RARE" is in sale since Saturday, September 21, 2019. This item is in the category "Books\Antiquarian & Collectible".

The seller is "merchants-rare-books" and is located in Moab, Utah. This item can be shipped worldwide.