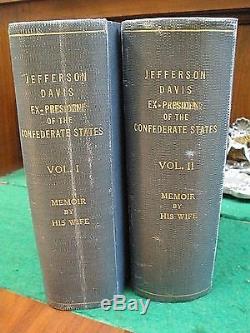 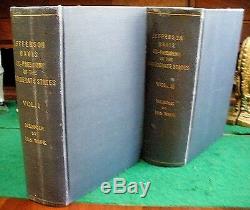 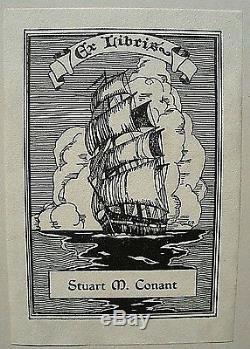 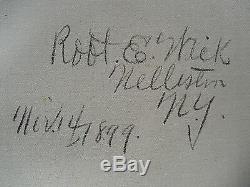 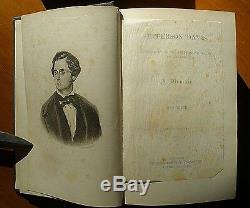 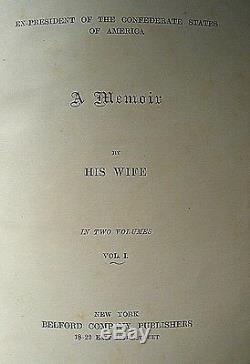 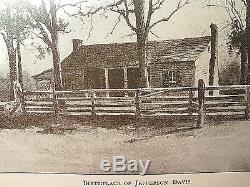 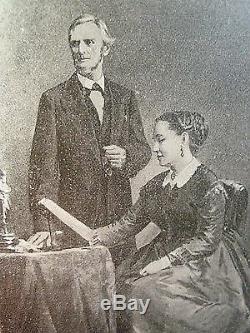 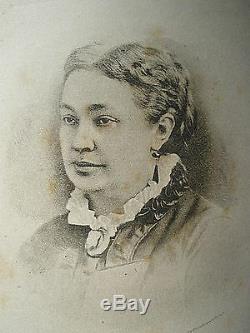 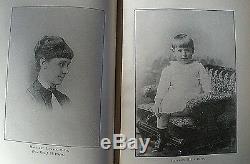 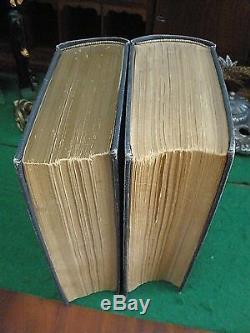 All 1638 pages in both volumes are assumed present and attached unless identified in the description below. Includes photogravure frontispiece portraits with complete and attached tissue guards in each volume: Volume I is a young Jefferson Davis; Volume II is of Varina Jefferson Davis. In addition there are sporadic but numerous plates, illustrations, maps, facsimiles of letters and documents throughout both volumes. Approximate Dimensions: 9" x 6.5". Overall Condition Description of Volumes: bluish gray smooth buckram hardcover books. Bright crisp single band at the head and the base of the spine as well as bright crisp gilt title, author and volume lettering. Spine is slightly sunned and darker than the boards. Head and the base of the spine are rubbed. Board edges have some wear. Both volumes have frontispieces along with complete and attached tissue guards that do have foxing. Ex-Libris sticker of previous owner. Also in pencil is another previous owner. (In Volume I it is after the last page; Volume II it is after the Ffep). Finger smudges and dirt rare but present on some pages. Slight musty smell but it is not overwhelming and does not detract from the volumes.

Spine is cocked and there is very slight separation with adhesive and binding thread visible along the gutter after the ffep. Minute corner fold on tissue guard.

Binding threads visible at certain times when the book is open but all pages are firmly attached. Top of pages are gilt that remains bright. Small almost invisible white wear line runs vertically down the spine.

Spine is slightly cocked but not as noticeable as Volume I. Pages 311-314 are laid-in at appropriate location in chronological order but have chipping and small edge tears. All other pages appear to be strongly attached. A piece of paper used as a book marker is inserted at page 373 and has the following inscription in pencil and period writing.

Bread riot in Richmond P373. Gilt on top of pages has faded or possibly was never there. This is a rebound first edition of this expansive and informative biography of the former President of the Confederate States of America during the Civil War, who had also served as a Colonel in the Mexican-American War, U.

Secretary of War under President Pierce, and later Senator from Mississippi. Unlike his own memoir which continually complained of the failures of his subordinates in the Confederacy, and his own managerial inadequacies, this biography of his wife tends to present a more balanced account of the entire career of Davis. However, many of his views of the Civil War, Reconstruction, and his ideas of race and nationality heavily influenced the Lost Cause views of history in the American South for decades.

From documents that I have found online it appears Mr. Conant was a part owner with Russell W. Bryant of the Conant-Bryant Power Company in Niagara County, New York. A copy of a document from the. Documents of the Assembly of the State of New York dated April 26, 1910.

Authorized the company to build a plant and distribution system in Wilson, NY to provide electricity for light, heat and power to the town. Goal: to achieve FIVE STARS with all customers. While we attempt to describe all defects, wear and tear and flaws please use the photographs with the listing to view any of those that we might have missed.

We take great pride and time to describe and photograph any defects. We do not consider "Buyers Remorse" to be a valid reason to return an item.

All books come from a smoke-free and pet-free home. Feedback left does not equate to our total sales to satisfied customers. FEEDBACK LEFT WHEN FEEDBACK IS RECEIVED. We hope you come back often to view our books. The item "JEFFERSON DAVIS 1890 HC/1st Ed.

Varina Davis Civil War Illustrated Complete Set" is in sale since Monday, November 28, 2016. This item is in the category "Books\Antiquarian & Collectible".