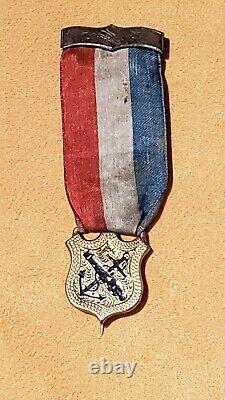 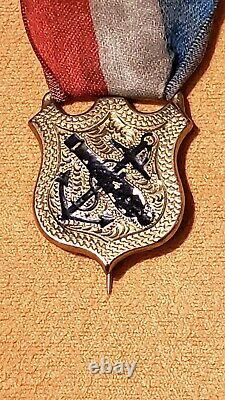 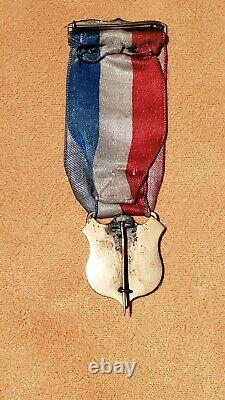 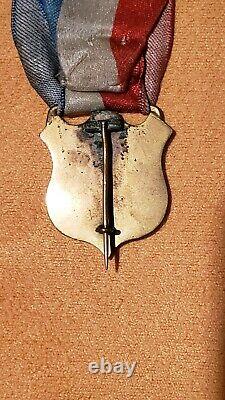 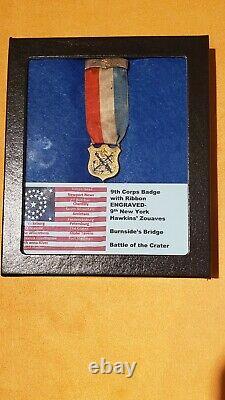 Investment Grade Civil War 9th Corps Badge, 9th New York Hawkins Zouaves. This is a 9th Corps Badge with an engraved Unit Designation of the 9th New York, a celebrated New York Regiment known as "Hawkin's Zouaves". The medal is a 9th Corps Badge, the Corps to which the 9th New York was attached, and has a T-bar pin on the back, it is not free-hanging, suggesting this was a period Corps Badge (nearly all of them were made with the tell-tale T-bar pin), and based on the size of the medal would likely have been on the front of an Officer's Kepi. The original (likely post-war) Ribbon is still attached, it is moderately soiled but in excellent condition.

The 9th New York engraving is very clear on the pin front, the photo is a bad photo I'll have to replace that. Overall length is 3 1/4. This is a BEAUTIFUL Civil War badge of a celebrated unit with a rich history of participation in some of the most famous battles of the American Civil War. Comes to you mounted in the pictured display with descriptive history and listed unit battle honors. The 9th New York Regiment was created in April of 1861 by Rush C. Hawkins, thus was dubbed "Hawkin's Zouaves".

He had asked the New York Governor for permission to form a Company of Zouaves, and was not only approved but was challenged to raise a Regiment. Thus the birth of the 9th New York. For the first year of the war the 9th New York was stationed in Hilton Head, NC, then Newport News, Virginia, supporting the blockade efforts on land.

By September of 1862 the 9th New York and the rest of the 9th Corps had been redeployed to Frederick Maryland, and was fully engaged first at the Battle of South Mountain , and a few days later the Battle of Antietam. At Antietam, the 9th New York participated in the efforts to take the famous "Burnside's Bridge", and late in the afternoon forded the Antietam Creek downstream and successfully overcame the Confederate troops that had held the Union forces at the bridge for the better part of the day. The 9th New York went on to participate in some of the bloodiest engagements of the Civil War; Fredericksburg, Vicksburg, Knoxville, The Wilderness, Spotsylvania Courthouse, North Anna River, Cold Harbor, Petersburg (supporting the assault on "The Crater"), Globe Tavern and Fort Stedman. Please view my other listings for additional Investment Grade Civil War Collectibles.

I have been collecting and dealing primarily in American Civil War edged weapons, firearms and militaria for over 30 years. I frequently travel to specialized and general trade shows, conventions, auctions, and private sales and viewings all over the country, and maintain a network of the most reputable collectors and dealers in the community, and limit all my acquisitions to this network. My objective is to both collect for myself, and to bring to you only truly authentic, investment grade military collectables. The item "Investment Grade Civil War 9th Corps Badge, 9th New York Hawkins Zouaves" is in sale since Saturday, July 31, 2021. This item is in the category "Collectibles\Militaria\Civil War (1861-65)\Original Period Items\Other Civil War Original Items". The seller is "rogercillo" and is located in Wilmington, Delaware. This item can be shipped worldwide.