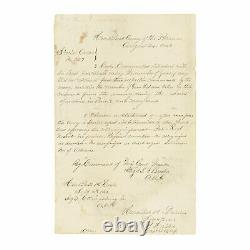 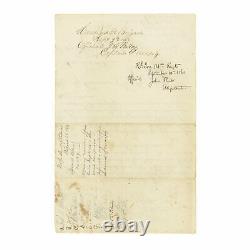 An August 1863 distributed copy of General George G. 227, which directed each corps to prepare lists of the number of artillery pieces lost and taken during the Gettysburg Campaign. The chain of command can be followed from Army of the Potomac Headquarters, then to the 1st Army Corps, then the 1st Division, then the 2nd Brigade, and finally to the 84th New York Infantry (also called the 14th Brooklyn or the 14th New York State Militia). What makes this document especially interesting is the docketed list on the verso where the regiments ten company commanders signed his name next to his companys letter, from A down to K. The document measures about 8 x 12 1/4. It is in excellent condition with light foxing and toning. Creased at the original folds. The full transcript follows, with a list of the company commanders names below that. Head Qrs Army of the Potomac. Corps Commanders will report with the least practicable delay the number of guns, if any, that were captured from their respective commands by the enemy, and also the number of Guns that were taken by their commands from the enemy during the recent operations in Penna and Maryland. Whenever a detachment of drafted men joins this Army a Special report will be transmitted to these Head Qrs affording the following informationDateRegtNo. Hd Qrs Army of the Potomac.

Requiring number of guns lost or captured in the recent campaign. Information required upon the arrival of conscripts. Rae, killed 5/10/1864 at Spotsylvania Court House. Michell, wounded 7/1/1863 at Gettysburg, POW 5/5/64 at Wilderness.