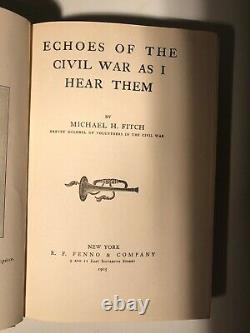 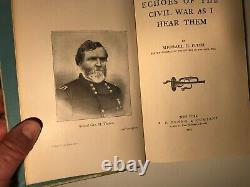 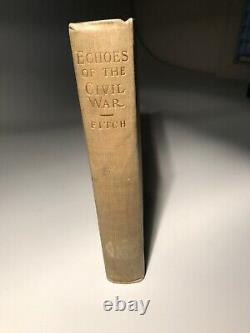 Stones River, Chickamauga, Kennesaw Mountain, Atlanta, and Shermans March to the Sea. Lieutenant Colonel Michael Hendrick Fitch was at all of them and more.

Looking back 40 years, he recounts the battles, the humorous tales, the anecdotes of Grant and other famous soldiers whom he met, and simple soldier stories. In 1861, Lieutenant Colonel Michael Fitch was a Milwaukee attorney when he enlisted in the Civil War.

By 1864 he rose to command of the 21st Wisconsin Regiment and was leading it north during General Sherman's March to the Sea when the war ended in 1865. On June 5, 1865, he describes his regiment's last days in Washington, D. And the administrative work that fell to him when it was time to discharge his troops. From Original Text: There is some little thing to be done almost every minute, and when it is in favor of some brave, quiet, modest, intelligent soldier who will at this late hour in the history of the regiment, thus perceive that his merits have not been overlooked, my heart swells with pleasure, until I forget the turmoil and dull routine of the day's work. Yesterday we turned out to greet our old commander, General George H.

The air vibrated with cheer after cheer that we gave the grand, true soldier. Our regiment was on the right of the division.

As this'Rock of Chickamauga' took my hand and shook it with an honest grip, he asked if I had been well, etc. Ex-Governor Randall addressed all the Wisconsin troops in the Army of Georgia, as our army is called, and then there was more cheering. [He later recalled that] our discharges were all dated on June 8, 1865, but we still remained in the United States service until arriving at Milwaukee, Wis. Where we went by rail from Washington. Then we were out, and citizens once more, after a service of two years, nine months and twelve days.

Please watch for my other Civil War related items for sale. I have an extensive collection of Civil War books, CDVs, art and ephemera. I have recently decided to downsize my collection and will be listing many more items in the coming months. The item "Echoes of the Civil War Memoir by Officer in 21st Wisconsin 1905 1st ed" is in sale since Monday, October 4, 2021. This item is in the category "Books & Magazines\Antiquarian & Collectible".

The seller is "odylmacfineusedbooks" and is located in Kirkland, Washington. This item can be shipped to United States.