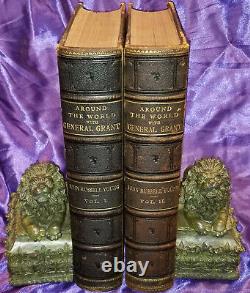 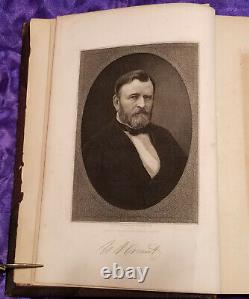 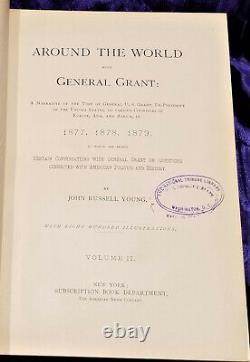 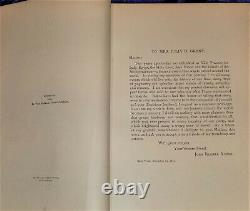 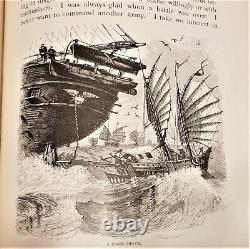 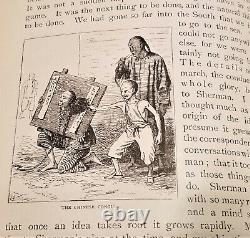 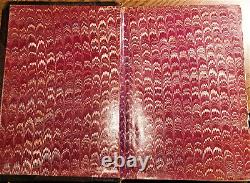 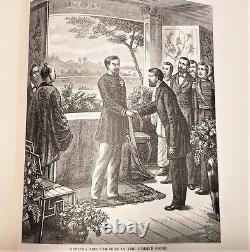 Young, John Russell, AROUND THE WORLD WITH GENERAL GRANT: A NARRATIVE OF THE VISIT OF GENERAL U. GRANT, EX-PRESIDENT OF THE UNITED STATES, TO VARIOUS COUNTRIES IN EUROPE, ASIA, AND AFRICA, IN 1877, 1878, 1879.

There are small library stamps on the title pages and in two other places in the book not blocking anything, there are no cards, stickers, or any other library adornments. The National Tribune Library; Washington D. Had been formed in 1877 just two years before the printing of these books to gather the story of the G. Veterans of the Civil War. It would eventually morph into the Stars and Stripes Magazine still active and printing to this day. Quite the marvelous set of tomes; of the highest quality and regarding as its subjects among the most illustrious Americans; Ulysses and Julia Grant and their 3 year world tour. The fold out map is present and in fine condition in vol. 2, the two volumes contain 42 full-page plates and a frontis of the great general himself. Interestingly the books are dedicated to Julia, Gen. Grant's wife, rather than Ulysses.

One can only guess at the reasons for such. Profusely and wonderfully illustrated with a stated 800 illustrations many of which reveal a story in themselves. Quite the distinctive set of books; indeed, a marvelous sector of Captured Tyme.

This item is in the category "Books & Magazines\Antiquarian & Collectible". The seller is "distinctive-books" and is located in this country: US.

This item can be shipped to United States, all countries in Europe, Canada.