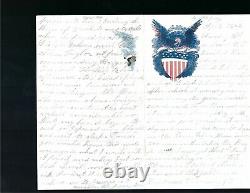 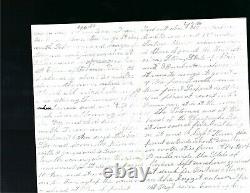 Condition as seen; Civil War letter to a soldiers family. This is the sixth letter of a group I have of a G W Wood who is is George W Wood of the 72nd Excelsior Brigade. He tends to write his letters numbering the pages where he is counting the pages written while in the army, so each letter notes another page number and may be why he didn't go through the trouble of signing all of them. He does sign one letter G W Wood.

He tends to use patriotic sheets, and has. Several of them with additional hand drawn art of his own, a talented soldier indeed. He was seriously wounded at the battle of Williamsburg eventually causing his exit from the army.

45th, April 1862 Tuesday 8th, on board NY Transport Elm City of Liverpool, joint I sent the memorandum home yesterday to state till Monday 12pm after which after which it was very rainy and stormy the ground was covered with snow this morning. Is embarking on board the Steamer State of Maine.

It is said that Yorktown is captured Wednesday, 46th is very stormy there is Federal boats gone down the river today with schooners and barges in tow weighing anchor at 3pm and stopping at 6pm off Johnson creek? A distance of about 20 miles downriver where we stayed all night. The night was stormy Thursday the 10th when I arose and went to the deck this morning. I found the VA and MD hills covered with snow. There it was too rough to go outside the Point with vessels in tow.

Point Lookout is in a beautiful place of sort in the ____. It is at the mouth of the Potomac River and at the head of the Chesapeake Bay. It has several fine buildings on it and a Lighthouse. The point extends about 3 miles out in water, it is about 1/4 to 1/2 a mile wide.

The State of Maine left anchorage about at dusk for Fortress Monroe as the Bay got calmer. The 1st Regiment is on Board of her (48th) previous to her starting she threw up three rockets as signals when she passed us. She gave Sickles three cheers and Col Nelson Taylor at present commanding the Brigade. This boat started a half an hour afterward the band played some nice tunes as we were sailing on the bay, the moon shown brightly on the waters. The boat rocked considerably so that my head began to reel so I spread my blanket and went to sleep....

Very descriptive of his transit in and around the Penninsula campaign where he would be wounded at Williamsburg. Residence was not listed; 19 years old. Enlisted on 7/17/1861 at New York City, NY as a Private. On 7/21/1861 he mustered into "C" Co. He was discharged for wounds on 1/27/1863 at Camp Nelson Taylor, VA.