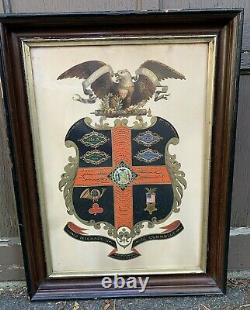 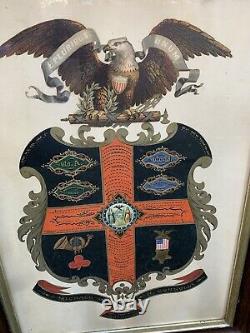 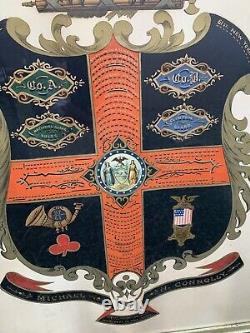 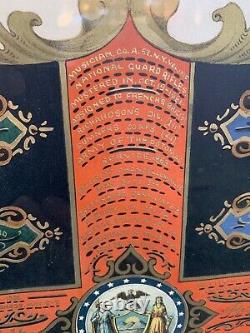 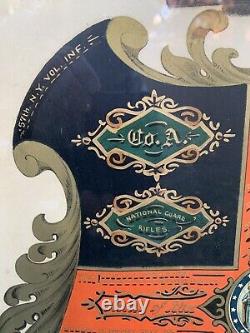 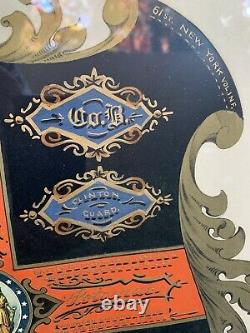 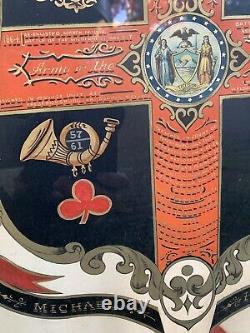 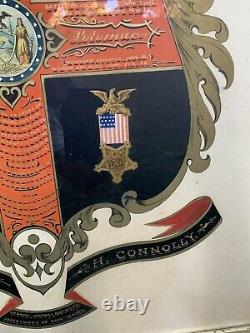 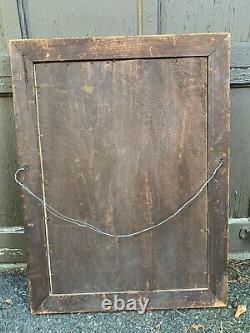 At top center is a large, full color, spread winged eagle sitting on a fascine. His head is turned to his right and in his beak he holds a ribbon that reads E PLURIBUS UNUM. In his right claw he holds a laurel wreath while in his left he holds arrows. On his chest is a US shield with the word UNION across the stop. Below the eagle is a shield or escutcheon divided into 4 quadrants by a red cross.

Each of the four quadrants has different insignia relating to the soldiers service. The upper left quadrant has 57.

The center of the quadrant has two green diamonds edged in gold. A while the other says National Guard Rifles. The upper right quadrant has 61. In the center of this quadrant are two more diamonds done in sky-blue and gold, these read Co. The lower left quadrant has a infantry hunting horn insignia with a horizontally divided center that has 57 over a 61. Below this is a red 1. Corps badge outlined in gold.

The lower right quadrant has a GAR membership badge, Across the bottom in a scroll is the soldiers name Michael H. All the decorations in the quadrants are bright and colorful being painted by hand. Michael Connolly was mustered into the 57.

New York as a Musician in Co. A on October 19, 1861. His service record on the escutcheon begins with the battle of Chancellorsville in 1863 and continues with Gettysburg, Auburn, Bristoe Station, Mine Run etc His history covers every major engagement of the Army of the Potomac from Chancellorsville to Appomattox. Why he starts his history in 1863 when he enlisted in 1861 is unknown. It may be that he was in the regimental band till they were disbanded and so began his war history when he rejoined his company. Also, to confuse things more, an on-line database shows him enlisting in 1864! It has been my experience that some of the men who enlisted in 1861 and RE-ENLISTED in 1864, like Connolly, turn up on these databases minus their first enlistment!

That seems to be the case here. Speculation can go on forever. For whatever reason he does not list the Campaigns of 1862 on his escutcheon. His service record, as listed, shows him wounded twice during the Petersburg Campaign.

1864 and again on November 5, 1864 at Fort Sedgwick. In December of 1864 he was transferred to the 61. New York and was finally mustered out on August 31, 1865. The very last entry at the bottom says he was a member of the Kearny Janeway Post #15 GAR, Department of New Jersey. Item comes in the original walnut frame that meas.

21.25 inches wide x 28.25 inches tall x 2.00 inches deep. The inner edge of the frame is done in gold gilt. The frame has moderate wear to the surfaces and a wood slat backing. There is some very light dirt from age and storage between the glass and the item.

The item "Civil War service record escutcheon 57th & 61st NY Infantry M. Connelly Musician" is in sale since Saturday, November 28, 2020. This item is in the category "Collectibles\Militaria\Civil War (1861-65)\Original Period Items\Documents". The seller is "truthbeautypower" and is located in Lansdowne, Pennsylvania. This item can be shipped worldwide.