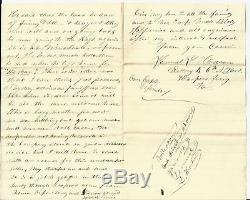 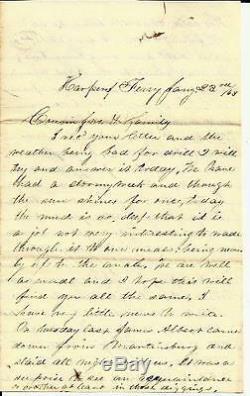 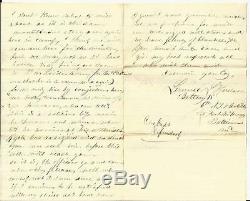 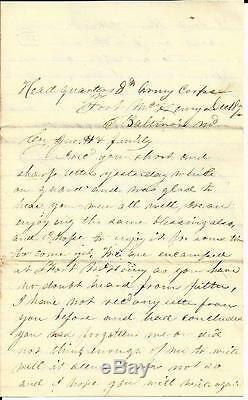 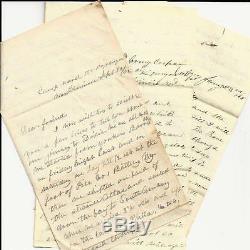 Heavy Artillery, originally mustered in as the 135. Left New York on September 5, 1862, and served in the Railroad Division of the 8. The regiment served at Harpers Ferry, West Virginia, defenses of the Upper Potomac River. Was involved in the Battle of Manassas Gap, Mine Run Campaign, battles of the Wilderness, Spotsylvania Courthouse, Cold Harbor, Cedar Creek and the Siege of Petersburg.

Were offering a group of three letters, totaling 9 pp, written by Hudson to friends and family. Two are 5 x 8 and in ink and one is 4 ½ x 7 ½ and in pencil.

He directs the recipients of his letters to write to him in care of Capt. Wislon Defendorf of Company K. From Camp Ward, 135 Reg. Vols, near Baltimore on September 12, 1862, Hudson writes.

I now scribble you a few lines to tell you about our journey to Dixie. We lay till 12 oclock at the foot of Pier No. I Battery NY then we shifted onward of the steamer Atlas and sailed down the bay to South Anibay where we arrived 3 ¼ oclock and left on the cars for PhiladelphiaWe passed through an almost unbroken forest of pine and oak for 10 or 15 miles and then came to some few house and open farms. We took breakfast at the Union Relief Association Buildings and got our rifles which are of the Enfield make and on Sunday morning we marched west of the city about 2 miles where we slept on the ground all night. And on Monday got our tents which are about 5 ft. Long by 3 feet high, just large enough to lay under.

On Tuesday we started at 8 oclock and marched about 2 miles farther on the Frederick City road where "Stonewall" is said to be. We encamped on a knoll of clay which is all soft and sticky now from the rain last night. I have been on guard for 2 days and was relived yesterday. The city is all most all built of brick with a great many narrow streets.

It looks better at a distanceThere are about 30,000 men encamped in and about it nowL. Head Quarters 8th Army Corps, Fort McHenry, Baltimore, MD, Dec.

I received your short and sharp letter yesterday while on guard and was glad to hear you were all well. We are enjoying the same blessing also, and I hope to enjoy it for some time to come yet. We are encamped at Fort McHenryWe will remain here for the winter but we may not as the last battle may bring us down to Burnsides army or McClellan now that he is in command again.

So we only live by conjecture here. Here today, tomorrow 40 miles off, after who can tell.

This is a soldier's life, moving he knows not where or when till he arrives at his destination. Ryck has resigned and no doubt you have seen him before this letter will reach you. So it is, the officers go and come when they pleaseOur tents [are] rigged with stoves and we have plenty of blanketsLemuel L.

I received your letter and the weather being pad for drill, I will try and answer it today. We have had a stormy week and though the sun shines for once today, the mud is so deep that it is a job not very interesting to make through it to our meals being nearly up to the ankleOn Tuesday last James Albert [Hudson, 1st New York (Lincoln) Cavalry] came down from Martinsburg. It was a surprise to see an acquaintance or brotherin these diggingsHe said that the last he saw of Jimmy Potter & Bogert they were well and on going back, he was going to their Regt. It is at Winchester at present. He looks much better than he did when he left home for the warPayday seems as far off as ever but when it does come it will be all the more welcome to usThe corporals not having to work in the company street or go on detail service Hudson has drawn a hand on this letter, writing a message within the fingers, Write soon and direct as above yours & C Lemuel L. The letters are very readable and in very good condition. Our goal is please every customer. We are pleased to be members of The Manuscript Society, Universal Autograph Collectors Club and The Ephemera Society. The item "Civil War Letters NY 6th Marched Where Stonewall Jackson Said to be" is in sale since Monday, December 9, 2019. This item is in the category "Collectibles\Militaria\Civil War (1861-65)\Original Period Items\Correspondence, Mail". The seller is "bminnocci6mtm" and is located in Boston, Massachusetts. This item can be shipped to United States, Canada, United Kingdom, Denmark, Romania, Slovakia, Bulgaria, Czech republic, Finland, Hungary, Latvia, Lithuania, Malta, Estonia, Australia, Greece, Portugal, Cyprus, Slovenia, Japan, China, Sweden, South Korea, Indonesia, Taiwan, South africa, Thailand, Belgium, France, Hong Kong, Ireland, Netherlands, Poland, Spain, Italy, Germany, Austria, Bahamas, Israel, Mexico, New Zealand, Philippines, Singapore, Switzerland, Norway, Saudi arabia, Ukraine, United arab emirates, Qatar, Kuwait, Bahrain, Croatia, Malaysia, Chile, Colombia, Costa rica, Panama, Trinidad and tobago, Guatemala, Honduras, Jamaica, Bangladesh, Uruguay, Russian federation.