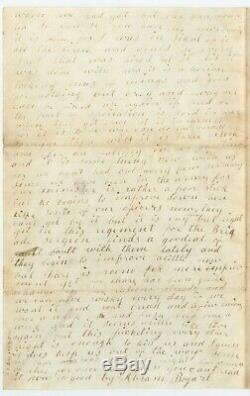 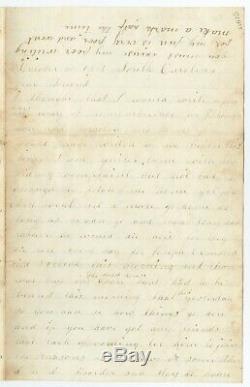 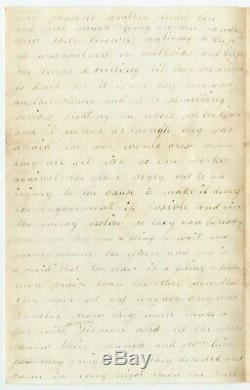 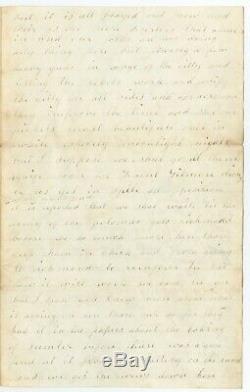 New York Soldier Reports on Fort Sumter before It Was Taken. If you have got any friends that talk of coming tell him to join the masons or odfellows or some other d n d disorder and stay at home. Autograph Letter Signed, to a friend, South Carolina, October 10, 1863, 4 pp.

You must excuse my poor writing for my pen is very poor and wont make a mark half the time. October 10 1863 South Carolina.

But it is all played out now and there is no more deserters that come in and our folks are not doing any thing here but fireing a few heavy guns in range of the citty and letting the rebels work and fortify the city on all sides and corners and they improve the time and shel our pickets most beautifully once in awhile especiely moonlight nights but I suppose we shal go at them again soon for General Gilmore sticks by us yet in spite all opposition. It is reported that we shal waite til the army of the Potomac gets Richmond before we do much more here than keep them in check and from going to Richmond to reinforce Lee but how it will work we cant tel yet but I spose you know more about what is agoing on here than we do for they had it in the papers about the taking of Sumter before thare was a gun fired at it from our battery on the land and we got the news down here. When we had got but one gun mounted so you se you have the news before it is done. For I was in sight of it all the time and could se every shot that was fired at it til it was done with and it is a horrible looking mas of ruings and good for nothing but creg. And wagner can be fixed up again if need be the part of spoliation is hard in war when they get once at it in earnest for it is to be who can do the most damage then well it is three oclock and they are falling in for meeting and it is some thing new with us for we hant had but avery few sermons since we have been in the army for our minister is rather a poor stick but he begins to improve down here like some of our oficers now. They cant get by it but it is any thing but right yet in this regiment for the Brigade sergeon finds a goodeal of fault with them lately and they begin to improve a little now but thare is room for more improvement yet for thare has been quite a change in our rations already and we can have wisky every day if we want it and soft bread and a few onions once a week and fresh beef once a week and it seems a little like live again but this picketing every other night is enough to kill us and I guess it does help us out of the way some for thar was died last night but enough of this for once for I gues you cant read it now so good by. Abram Bogart / Masonville, / Delaware Co. Organized in August and September 1862, the 144. New York Volunteer Infantry regiment traveled by railroad to Washington, D. Where it joined in the defense of Washington until April 1863, when it was ordered to Suffolk, Virginia, near Norfolk. There, General Longstreet besieged the regiment for two weeks. The regiment participated in the pursuit of Lees army after the Battle of Gettysburg, before being ordered to Folly Island, South Carolina. The regiment remained there and on Morris Island from August 1863 to February 1864, and participated in the sieges of Fort Wagner and Fort Gregg. Confederates abandoned Fort Wagner on September 6, and Union forces captured Fort Gregg later that same month. With the capture of these forts on Morris Island, the Union forces bombarded Fort Sumter for 13 months from August 1863 to September 1864, reducing the location of the start of the war to a pile of rubble. Contaminated drinking water led to outbreaks of chronic diarrhea and typhoid fever that disabled many and killed dozens of soldiers in the 144. He enlisted as a private in Company I of the 144. New York Volunteer Infantry in August 1862 for three years.

A month later, he transferred to Company K in the same regiment. He mustered out with his company on June 25, 1865, at Hilton Head, South Carolina. He began receiving an invalid pension in 1886, and still lived in Sidney in 1892.

For over 20 years, Seth Kaller has been one of the countrys largest buyers of important historic documents and artifacts. More than 10,000 rare manuscripts, documents, maps, and books handled by Kaller are now in institutional and private collections including working drafts of the United States Constitution, Lincoln-signed copies of the 13th Amendment and Emancipation Proclamation, and rare prints and broadsides of the Declaration of Independence.

Kaller is a member of the Antiquarian Booksellers Association of America (ABAA), the Professional Autograph Dealers Association (PADA), the American Antiquarian Society, the Manuscript Society, the New-York Historical Societys Chairmans Council, and the Papers of Abraham Lincoln Advisory Board. Everything we sell comes with our absolute guarantee that it is original and authentic. Whether youre interested in the Founding Fathers, Documents of Freedom, Battles and Leaders, the Civil War, African-Americana, World History, Science, or a particular hero or villain, we can help you explore opportunities to take ownership of history. We can coordinate every aspect of the process for you, from searching for individual items to building entire world-class collections for your home, business, foundation, or favorite museum.

Build a legacy by preserving history for generations to come. Through donations and loans to your favorite museum, library, or university, you ensure the survival of these important documents and act as a steward for personalities and ideas that shaped the world. The item "Civil War Letter re New York Soldier Reporting on Fort Sumter" is in sale since Wednesday, October 9, 2019.

This item is in the category "Collectibles\Militaria\Civil War (1861-65)\Original Period Items\Other Civil War Original Items". The seller is "sethkaller" and is located in White Plains, New York.