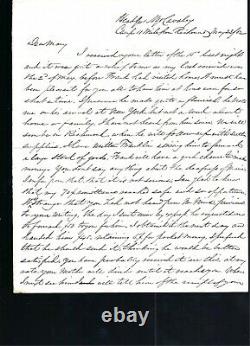 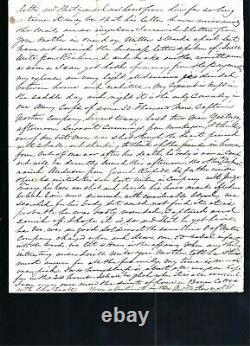 2 page letter from Colonel A T McReynolds 1st NY Cavalry known as the Lincoln Cavalry in the field during the. Lost two men yesterday afternoon Sgt Cummings one of the best men in the regiment was shot through the heart pierced with two balls and it is shocking to think of the fiends who cut off one ear after his death, his body is now in camp. Another soldier named Anderson from Grand Rapids, his father resides there, had visited his son last winter in company with Judge Tracy, his horse was shot and beside his horse marks of where he had lain had been discovered with considerable blood.

We searched for his body but could not find it, it is probable that he was badly wounded, captured and carried off. I hope it is so and that he yet lives, he too was a good soldier at the same time. Company charged upon and drove over 50 rebel infantry into the woods, but lost four horses in the affair.... Full Colonel's letter with interesting commentary on the deaths and.

Of two of his soldiers! This item is in the category "Collectibles\Militaria\Civil War (1861-65)\Original Period Items\Correspondence, Mail". The seller is "civil_war_photos" and is located in this country: US. This item can be shipped worldwide.