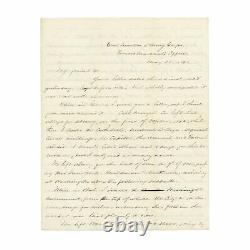 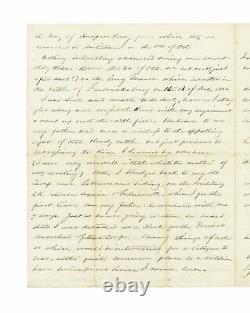 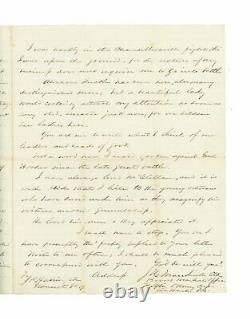 This May 1863 letter was written and signed by Private James H. Mandeville of the 44th New York Volunteers while he was detached as a clerk for the Provost Marshal of the 5th Corps. In the letter Mandeville brings his friend up to speed on what hes been up to since enlisting in the Army. He writes that Captain Bennett Mungers Company C left Geneva for Albany on October 1, and that he toured several of the Albany sites.

We left Albany for the seat of War the 9th of Oct, passing through New York, Philadelphia, and Baltimore en route to Washington. We left Wash to join the 44 N. Going by the way of Harpers Ferry, he writes.

The regiment passed an uneventful time in Sharpsburg through the end of October, when we set out just after dark! On the long march which resulted in the battle of Fredericksburg.

Mandeville then writes about the battle and an amazingly coincidental meeting with his father. I was sick and unable to do duty.

However, I straggled along and crossed the River with my regiment & went up onto the battlefield. Unknown to me, my father had been a witness to the appalling sights of that bloody battle, but just previous to recrossing the River I learned he was here. Well, I trudged back to my old Camp near Stonemans Siding, on the Military R.

Between Aquia & Falmouth, when I for the first time saw my Father. He remained with me 9 days. Just as he was going to return he heard that I was detached as clerk for the Provost Marshal of the 5 Corps. I was hardly in the Chancellorsville fight, he continues, tho I was upon the ground, for the nature of my business does not require me to go into battle. He then notes that Abraham Lincoln has been here and that not a word have I heard spoken against Genl. Hooker since the late great battle. He closes by expressing his feelings about General McClellan. I have always loved McClellan, and it is with pride that I listen to the young veterans who have served under him as they magnify his virtues and his generalship. He loved his men & they appreciated it.

When the 44th New York mustered out in October 1864, Mandeville transferred to the 140th New York, but remained a clerk in various departments of the 5th Corps through the remainder of the war. He was discharged in May 1865.

The letter was written on 3 pages of a 4 page bifolium stationery sheet measuring 7 3/4 x 9 3/4. Excellent condition with very light toning. Creased at the original folds.

The letters full transcript follows. Head Quarters 5 Army Corps. Your letter dated the 24 inst, recd yesterday, lays before me. Tho wholly unexpected it was read with pleasure.

While in Geneva I wrote you a letter, but I think you never received it. Left that village for Albany on the first of October, 1862; while there I visited the Cathedral, Medical College, Agricultural buildings, the Capitol, the Arsenal, and Palmers Studio. I should liked to have had 3 days for this excursion, but I only had as many hours. We left Albany for the seat of War the 9th of Oct, passing thru New York, Philda, and Baltimore, arriving at Washington upon the following Sabbath. While in Bal I visited the Washington Monument, from top of which the city & its surroundings for miles, including the forts in the harbor, are laid plainly to view. Going by the way of Harpers Ferry, from which city we marched to Antietam on the 14 of Oct.

Nothing interesting occurred during our short stay there. Upon the 30 of Oct. We set out just after dark! On the long march which resulted in the battle of Fredericksburg on the 13 of Dec, 1862. Many things of note or which would be interesting for a citizen to read, altho quite commonplace to a soldier, have transpired since I came here.

I was hardly in the Chancellorsville fight, tho I was upon the ground, for the nature of my business does not require me to go into battle. Abraham Lincoln has been here.

Also many distinguished men; but a beautiful lady would certainly attract my attention as soon as any U. Senator just now, for we seldom see ladies here. You ask me to write what I think of our leaders and heads of govt. Not a word have I heard spoken against Genl. I shall have to stop. You see I have promptly tho feebly replied to your letter.

I shall be much pleased to correspond with you. Please see my other items for more original Civil War items. The item "Civil War Letter 44th New York Sees Father at Fredericksburg Battlefield" is in sale since Tuesday, October 19, 2021. This item is in the category "Collectibles\Militaria\Civil War (1861-65)\Original Period Items\Correspondence, Mail".