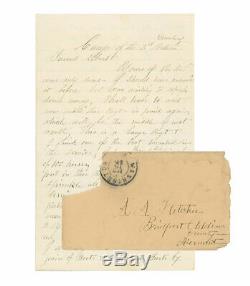 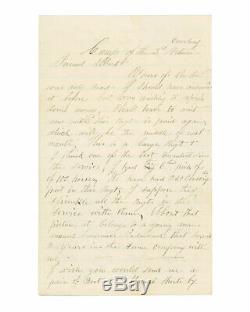 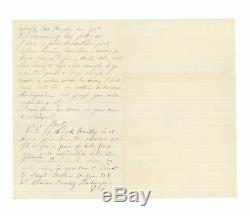 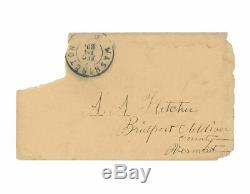 A nice undated letter, undated, but determined to be from December 1863, written by Sergeant Mathew Halpin of the 2nd New York Veteran Cavalry , a new regiment that was organized late that summer. Like many of the regiments members, Halpin had previous military servicea two-year enlistment in the 22nd New York Infantry. He believed his new regiment to be one of the best mounted in the service, before remarking that in the selection of mounts he had the 6th pick of 100 horses. Halpin closed the brief letter by requesting new boots and shirts from home. The boots he desired to be double sole, with heel irons, & legs wide enough to go over the pants & long enough to reach 6 inches above the knee.

Two comrades from the 22nd New York are mentioned in the letterLieutenant Clark W. Huntley and Private Laurence Redmond. The letter was written on two pages of a four-page 5 x 8 stationery sheet. It is in excellent condition with light toning. Included is the original postal cover with December 16 Washington, DC postmark.

Camp of the 2d Veteran Cavalry. Yours of Nov the 11th was duly recd.

Shall have to wait now until this Regt is paid again, which will be the middle of next month. This is a large Regt & I think one of the best mounted in the service. I had the 6th pick of 100 horses. We have had 260 conscripts put in this Regt.

I suppose they sprinkle all the Regt in the service with them. About that picture, it belongs to a young man named Laurance Redmond that served 2 years in the same Company with me. I wish you would send me a pair of boots & 2 flannel shirts by express. Huntly has got the measure of my foot, as I had a pair made there just before leaving. Have them made 1/2 size longer & fine, double sole, with heel irons, & legs wide enough to go over the pants & long enough to reach 6 inches above the knee. I dont know but this is rather a curious description but guess you will understand it. Send them as soon as you can & oblige. If Clark Huntly is at home give him the enclosed note. It is for a pair of boots for a man well acquainted with him. Have him send them in the same box with mine, if you can, & direct to Sergt Mathew Halpin, Co. E, 2d Veteran Cavalry, Washington D. Please see my other items for more interesting Civil War letters, documents, and images.

The item "Civil War Letter 2nd NY Veteran Cavalry I had the 6th pick of 100 horses" is in sale since Sunday, November 10, 2019. This item is in the category "Collectibles\Militaria\Civil War (1861-65)\Original Period Items\Correspondence, Mail". The seller is "iron-horse-sales" and is located in Champaign, Illinois.