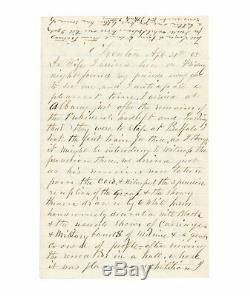 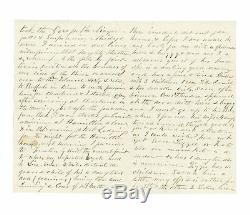 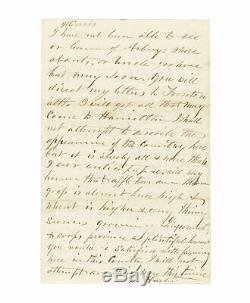 An interesting April 1865 letter written by Daniel W. Marston , formerly a captain in the 16th Maine (he had been discharged due to injuries in December 1864). Writing to his wife shortly after President Lincolns assassination , Marston found himself in Albany at the same time that Lincolns funeral procession was departing the state capital. Learning that the next stop would be Buffalo , Marston. Took the first train for there, as I thought it might be interesting to witness the procession there. We arrived just as his remains were taken from the cars & witnessed the splendid reception of the group & the showy Hearse drawn by 6 white horses, handsomely decorated with black & the usual show of carriages & military bands of Marines & a great crowd of people.

The remainder of the letter concerns Marstons visit with family in the Hamilton, Ohio area. In 1861 Marston, 45, and his son, Daniel W. Marston, 15, enlisted in the 9th Maine Volunteers, the latter as a musician. The elder Marston was promoted and transferred to the new 16th Maine in 1862, and his son was transferred with him. Captain Marston was wounded at Fredericksburg in December 1862 and was discharged for injuries in December 1864.

Marston, was discharged in September 1864 at the expiration of his enlistment. The letter was written on four pages of a bifolium stationery sheet measuring 5 x 8. It is in excellent condition as shown. Creased at the original mailing folds.

Dr Wife, I arrived here on Friday night, found my friends very glad to see me, and I anticipate a pleasant time. I arrived at Albany just after the remains of the President had left, and learning the they were to stop at Buffalo, took the first train for there, as I thought it might be interesting to witness the procession there. After viewing the remains in a hall, where it was placed on exhibition, I took the cars for the Niagara Falls & suspension bridge, where I arrived in due time, witnessing that mighty structure, & returning to the falls by first train, visiting all the wonders of our side of the River.

Crossed over to the Island safe & return to Buffalo in time to see the procession leave for Cleveland, and I started 2 hours after, arriving at Cleveland in the morning, just after the procession. From there, I soon started for Cincinnati, arriving at Hamilton about 8 in the evening & took lodgings for the night at the Hamilton house. Next morning I proceeded to Trenton by rail, the nearest point to where my respected Uncle used to live, some 2 miles distant. A grandchild of his, a daughter & son (Johnnys) being there and learning a Cous[in] of his Mother was there, immediate set out for home & before I was aware he was back for me with a splendid horse & buggy, & soon was I a welcome guest of her house. She is a darling good woman and has a fine & kind husband with 3 children, 1 son like Daniel & two smaller girls. Soon after dinner Cous Theodore appeared at the door with horse & buggy and I must go up to his house, where I found his wife & 4 daughters, all under 13. They are all good & just as kind and attentive as I could wish. I have not yet seen Lizzie or Kate, who are near. Kate is a widow & has 1 daughter who is married. Sarah lives a little way off & is [in] rather poor health. The other 2 sisters live in Illinois. I have not been able to see or learn of Ashbys whereabouts, or Uncle Joes home, but may soon.

You will direct my letters to Trenton altt. I will get all that may come to Hamilton. I shall not attempt to describe the appearance of the country here, but it is surely all & more than I ever anticipated. Will say, however, that apple trees are in bloom, grass is almost knee hight, & wheat is higher & everything seems growing luxuriantly and crops promise a plentiful harvest.

You would be satisfied with farming here in this country. I will not attempt anything more this time. Tell Lena & Perry to send their pictures for I will exhibit Lenas torn one til I get a better one. You had better have some of yours avail too. Please see my other items for more interesting Civil War letters, documents, and images.