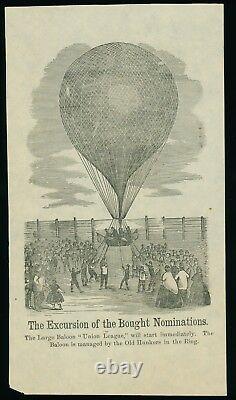 The Balloon is managed by the Old Hunkers in the Ring. The Union League Club formed in New York in 1863 to support Union troops and cultivate civil devotion. Sanitary Commission and establish a group of political elites to sustain Union military efforts.

The league favored a strong central government, tariff protections, and internal improvements. The "Old Hunkers" were the conservative branch of the New York state Democratic party in the mid-nineteenth century.

They favored the status quo, whether in business or on the contentious issue of slavery. The more progressive "Barnburner" faction stood in opposition to the old Hunkers, and were against slavery, strong state powers, expanding the public debt, and government subsidizing businesses. Though the Old Hunkers shared many similarities in terms of business philosophy with the Union League-especially that of strong central government power and infrastructure improvements-the disconnect between the two groups' stance on slavery makes this cartoon perplexing.

Are the Old Hunkers carefully managing the political situation (the balloon) through the New York political machine (note the capital "R" of Ring, as in the infamous Tweed Ring)? Or are they setting the progressive Union Leaguers adrift? Historic Documents and Legacy Collections. For over 20 years, Seth Kaller has been one of the country's largest buyers of important historic documents and artifacts.

More than 10,000 rare manuscripts, documents, maps, and books handled by Kaller are now in institutional and private collections including working drafts of the United States Constitution, Lincoln-signed copies of the 13th Amendment and Emancipation Proclamation, and rare prints and broadsides of the Declaration of Independence. Kaller is a member of the Antiquarian Booksellers' Association of America (ABAA), the Professional Autograph Dealers Association (PADA), the American Antiquarian Society, the Manuscript Society, the New-York Historical Society's Chairman's Council, and the Papers of Abraham Lincoln Advisory Board. Everything we sell comes with our absolute guarantee that it is original and authentic.

Whether you're interested in the Founding Fathers, Documents of Freedom, Battles and Leaders, the Civil War, African-Americana, World History, Science, or a particular hero or villain, we can help you explore opportunities to take ownership of history. We can coordinate every aspect of the process for you, from searching for individual items to building entire world-class collections for your home, business, foundation, or favorite museum.

Build a legacy by preserving history for generations to come. Through donations and loans to your favorite museum, library, or university, you ensure the survival of these important documents and act as a steward for personalities and ideas that shaped the world. This item is in the category "Books & Magazines\Antiquarian & Collectible". The seller is "sethkaller" and is located in this country: US.