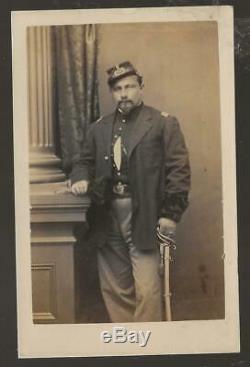 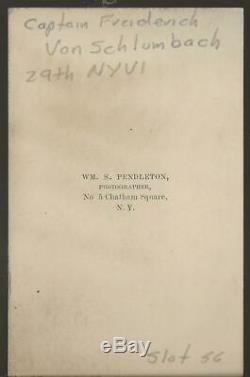 Union Lt Friederich Von Schlumbach of the 29th NYVI, served 5/61-10/62. Friedrich von Schlümbach (born June 27, 1842 in Öhringen , Württemberg , May 21, 1901 in Cleveland , Ohio) was a German-American revivalist and founder of the first CVJM in Germany. Coat of arms of the von Schlümbach family, 1761. Due to high debts, which he had already incurred in the first few months, he had to flee and emigrated to the USA. There he fought in the civil war from May 1861 on the side of the northern states. After being released in the rank of captain in 1865, he tried various professions until he - who was previously a supporter of the atheistic free- thinking movement - underwent a conversion in 1868. He trained at a seminary at the Episcopal Methodist Church and worked from 1872 as a preacher for German immigrants in Baltimore.

There he tried primarily for the youth and founded German-speaking Christian youth clubs, which he initially collected in a national association from 1874, but then transferred to the YMCA. From 1878 he worked as secretary for the German-speaking work of the YMCA based in New York City. He traveled extensively in the United States and in 1880, together with Dwight Lyman Moody, carried out a well-known evangelization in Chicago. At a YMCA conference in London in 1881, Schlümbach met German supporters of the community movement who invited him to the federal festival of the Rhenish-Westphalian Youth League in Elberfeld.

There he met, among others, the Bonn practical theologian Theodor Christlieb , who won him over for an evangelization trip in Germany. Schlümbach was not supposed to promote Methodism, but work closely with representatives of the regional churches. In September 1882, an event at the Hermann Monument gave the impetus for the unification of the German Protestant youth groups; the CVJM Association in Germany considers this to be its origin.

Then Schlümbach acted on mediationAdolf Stoeckers spent several months in Berlin, where he initiated the foundation of the first CVJM on German soil in January 1883. Further campaigns led to Magdeburg, Hamburg and Schleswig-Holstein, most recently to his home in Württemberg. Here he declared his resignation from the Methodist Church in July 1883 because he now saw his concerns realized in the regional churches. Back in the United States, Schlümbach became pastor of a Lutheran church in Cleveland. But he kept in touch with the friends in Germany and came there several times. He was involved in the founding of the German Evangelization Association in 1884 and the Evangelist School Johanneum in 1886. The item "Civil War CDV Union Lt Friederich Von Schlumbach 29th NY Volunteer Infantry" is in sale since Monday, April 20, 2020. This item is in the category "Collectibles\Militaria\Civil War (1861-65)\Original Period Items\Photographs". The seller is "civil_war_photos" and is located in Midland, Michigan. This item can be shipped worldwide.