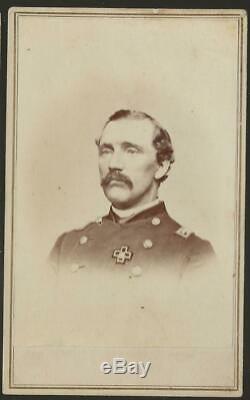 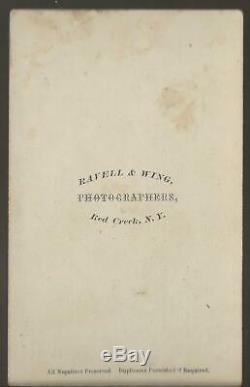 Published image of Colonel James W Snyder with a Spectacular VI Corps badge. Second Auburn Regiment; Cayuga And Wayne County Regiment. The following is taken from New York in the War of the Rebellion, 3rd ed.

Mustered out: July 6, 1865. The organization of this regiment was determined August 8, 1862, and Col. Joseph Welling received, August 12, 1862, authority to recruit the regiment in the, then, 25th Senatorial district of the State. September 29, 1862, this regiment was designated the 138th Regiment of Infantry. It was organized at Auburn, and there mustered in the service of the United States for three years, September 8 and 9, 1862.

It was converted into an artillery regiment December 9, 1862, and designated, December 19th, the 9th Regiment of Artillery. February 5, 1863, the 22d N. Volunteer Battery was, by the War Department, transferred to the regiment as Company M. Company L was organized at Albany and there mustered in the United States service for three years between November 4 and December 9, 1863. The companies were recruited principally: A at Red Creek, Huron, Wolcott and South Butler; B at Williamson, Ontario and Walworth; C at Conquest, Cato and Victory; D at Lyons, Sodus, Huron, Rose and Galen; E at Venice, Scipio, Auburn, Moravia, Miles, Summerhill, Fleming and Montezuma; F at Geneva, Auburn, Owasco, Sennett, Niles, Lansing, Mentz and Aurelius; G at Wolcott, Savannah, Butler, Sterling, Huron and Rose; H at Galen, Butler, Savannah, Rose and Victory; I at Auburn, Owasco and Sennett; K at Clyde, Ira, Lyons, Wolcott, Galen, Williamson and Ontario; L in Albany county; and M at Batavia, Bergen, Bethany, Alexander, Darien and Oakfield.

The regiment (ten companies) left the State September 12, 1862, and served as infantry and heavy artillery in the defenses of Washington, D. North of the Potomac, from September, 1862; in the 2d, and later 3d, Brigade, Haskins' Division, 22d Corps, from February, 1863; the 1st and 3d Battalions in the 2d Brigade, 3d Division; the 2d Battalion in the Artillery Brigade, 6th Corps, Army of the Potomac, from May 25 and 31, 1864, respectively; the 2d Battalion in 1st Brigade, Hardin's Division, 22d Corps, at Washington, D.