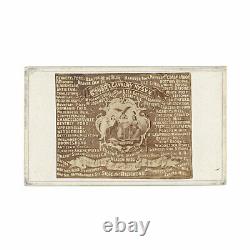 This CDV by William Klauser, New York, features the regimental standard of the 6th New York Cavalry. The blue silk presentation flag was issued to the regiment after it reenlisted in 1864 as veteran volunteers note the regiment is designated N. Painted on the flag are the names of more than seventy battles and skirmishes in which the regiment was engaged. This is a postwar view, produced in 1867 or 1868 when Klauser was at the 630 Broadway location.

The carte is in excellent condition with light toning and edge staining on the mount. Measures about 4 x 2 1/2. This flag is preserved today by the New York State Military Museum and Veterans Research Center and can be seen on their website.

Goler, Floyd Clarkson, William P. This regiment was organized at New York city in the fall of 1861 as the 2nd Ira Harris Guard.

The companies of which it was composed were recruited from the counties of New York, Dutchess, Columbia. Lawrence, Allegany, Broome, Monroe and Steuben, and were mustered into the U. 19, 1861, for three years.

At the expiration of its term of service those entitled thereto were mustered out and the regiment, composed of veterans and recruits, remained in service. On June 17, 1865, commanded by Col. Fitzhugh, it was consolidated into eight companies, which with the 15th N. Cavalry, united to form the 2nd Provisional regiment, N.

A, B, C, D, E, I, L and M of the new organization. The regiment left the state on Dec. 23, 1861, commanded by Col. Devin, proceeding first to York, Pa. Where it passed the winter in barracks, dismounted.

In the spring of 1862 it was mounted and the 3d battalion, composed of Cos. D, K, F and H, took part in the Peninsular -campaign with the 2nd and 4th corps, rejoining the regiment in the summer of 1863. The ist and 2nd battalions were employed during 1862 in guard and scouting duty, attached first to Gen. Wadsworth's command, and afterward serving with the 9th corps, and Pleasonton's cavalry division, in the 2nd brigade.

The regiment took an active part in the Maryland campaign, being the first regiment to enter Frederick City. It was active at South mountain and Antietam, the latter battle being opened by a squadron of the 6th. For a brilliant affair near Lovettsville, Va. 1862, it received the thanks of Gen. Burnside in a special order.

1863, it was attached to the 2nd brigade, ist cavalry division, Army of the Potomac, a detachment serving with the 22nd corps in July and August, and in Oct. 1864, the regiment was ordered to the Army of the Shenandoah. At Spottsylvania Court House, the day before the opening of the battle of Chancellorsville, the regiment made a brilliant charge upon Fitz Hugh Lee's brigade, and sustained a loss of 51 in killed, wounded and missing, among the killed being its gallant commander, Lieut. It was highly commended by Gen. Pleasonton, who said: The heroism of the 6th N. Cavalry in cutting its way to our line through treble the force of the enemy's cavalry, created the greatest admiration.

The reg'iment was active at Chancellorsville, losing 21 killed, wounded and missing, and saw much hard ^ghting from this time on. It took part in the Gettysburg campaign and in the subsequent operations in Virginia ending with the Mine Run campaign, though its losses were small for the amount of active duty performed, as Col. Devin knew how to take his men into action and also how to bring them out.

Early in 1864, it shared in Kilpatrick's raid to Richmond; was active at the Wilderness; in Gen. Sheridan's raid to the James river; at Cold Harbor; Sheridan's Trevilian raid, where its losses aggregated 63 in killed, wounded and missing; at Deep Bottom, Berryville, Cedar creek, the Opequan. Fisher's hill, the second Cedar creek, Newtown, and numerous lesser engagements.

In 1865, with the Army of the Potomac, it joined in the final campaign, being actively engaged at Dinwiddle Court House, Five Forks, the fall of Petersburg, Deep creek, Amelia Court House, Sailor's creek and Appomattox. At Five Forks, where the 6th was among the first tO' enter the enemy's works, it was presented with a flag by Gen.

Sheridan, emblazoned with the words Five Forks. Devin and Fitzhugh were brevetted major-generals for gallant and meritorious conduct.

The total loss of the 6th was 9 officers and 72- men, killed in action and died of wounds, 133 men died of disease^ accident and all other causes, of whom 36 died as prisoners. There were 24 officers and 186 men wounded, including the mortally wounded; 12 officers and 197 men were reported missing; aggregate of casualties, 472.

Medals of honor for gallant conduct in the capture of the colors were awarded to Thomas Kelly, private; Patrick H. Meach, farrier, and Thomas M. The regiment participated in over 150 battles and skirmishes and gained a splendid reputation for efficiency and discipline. Please see my other items for more Civil War CDVs.