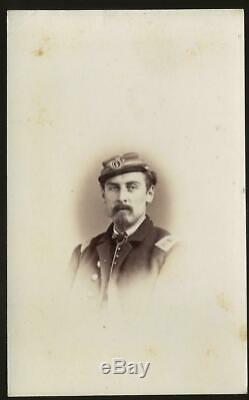 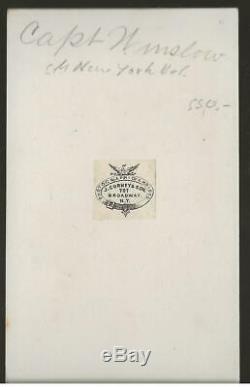 Cleveland Winslow (May 26, 1836 July 7, 1864) was a United States Army officer who served with the 5th New York Volunteer Infantry, otherwise known as the famed Duryee's Zouaves, during the American Civil War. He was also a participant in the New York Draft Riots in 1863. Although a charismatic and courageous battlefield commander (and noted for his fondness of flamboyant uniforms), he was reputed to be a strict disciplinarian generally considered to be unpopular with the lower ranking soldiers. New York City Draft Riots. Born in Medford, Massachusetts, as the eldest son of Reverend Dr. Gordon Winslow and Katherine G. Fish, he served in the New York State Militia prior to enlisting in the Union Army after hostilities began between Union and Confederate forces in early 1861 his father, Gordon Winslow would also enlist in the 5th Infantry as a regimental chaplain while his younger brother, Gordon Winslow, Jr. Would join the unit later on as a lieutenant. Assigned to the 5th New York Volunteer Infantry, Winslow initially served as captain of Company K and Company E, before assuming command from Hiram Duryea shortly before Second Battle of Bull Run.

He would later command the regiment during the Seven Days Campaign as well as engagements during Antietam although his regiment was largely held in reserve aside from taking part in minor skirmishes. [1] Following these battles, Winslow rapidly rose through the ranks, being promoted to major on September 24, 1862, and colonel on December 4, 1862. Returning to New York in May 1863, the original regiminent was mustered out after its two-year enlistment period.

However, after having subsequently reorganized the 5th New York Infantry as a veteran battalion on May 25, Winslow was recalled to New York City to suppress the New York City draft riots the following month. Commanding a small force consisting of 50 men from his regiment as well as 200 volunteers under a Major Robinson and two howitzers under Col. Jardine, Winslow was one of many infantry forces overwhelmed by the rioters and, despite artillery support, was forced to retreat after engaging a large mob numbering an estimated 3,000 rioters[2] in house to house fighting along First Avenue between 18th and 19th Streets.

After several months of garrison duty while stationed in Alexandria, Virginia, Winslow and his battalion was assigned to the V Corps attached to the Army of the Potomac and gradually brought up to full strength and later led the New York 5th Infantry in its final campaign at the Battle of Chancellorsville. [4] During the Battle of Cold Harbor, Winslow suffered a severe shoulder wound while rallying his soldiers at Bethesda Church on June 2, 1864. Escorted by his father Gordon Winslow, then a representative of the United States Sanitary Commission to the Army of the Potomac, Winslow was brought back to Alexandria on a hospital steamer (during which time, the elder Winslow drowned after falling off the steamer) and eventually died of his wounds at the Mansion House hospital on July 7, 1864.

Winslow is portrayed by Stan McGee in the 2007 film Red Legged Devils. Civil War Union Army Officer. The son of Reverend Doctor Gordon Winslow and Katherine G. Fish, he served in the New York State Militia prior to enlisting in the 5th New York Volunteer Infantry (Duryee's Zouaves) at the outbreak of the Civil War. He served as Captain of Company K, and later Company E of the 5th New York, and commanded the regiment during the Seven Days battles and the engagements of Second Manassas and Antietam.

His father was Regimental Chaplain of the 5th New York, while his younger brother, Gordon Winslow, Jr. Later joined the unit as a Lieutenant.

Cleveland Winslow was promoted Major on September 24, 1862, and Colonel on December 4, 1862. Undeniably dashing and brave, and fond of flamboyant uniforms, he was also a strict disciplinarian who was generally unpopular with the rank and file. Following the muster out of the original two year regiment, he took part in the suppression of the New York City draft riots (July 1863) and subsequently reorganized the 5th New York as a veteran battalion.

After several months of garrison duty in Alexandria, Virginia, the battalion was assigned to the V Corps, Army of the Potomac, and brought up to full regimental strength by the transfer of men from the 14th Brooklyn and other units. On June 2, 1864, Colonel Winslow was severely wounded in the left shoulder while rallying his soldiers in the battle of Bethesda Church, part of the larger engagement at Cold Harbor.

Reverend Winslow, then serving as representative of the Sanitary Commission to the Army of the Potomac, escorted his wounded son northward on a hospital steamer. Tragically the elder Winslow fell from the vessel and drowned in the Potomac River. Cleveland Winslow succumbed to his wounds at the Mansion House hospital in Alexandria, Virginia, on July 7, 1864. Following the Civil War, Cleveland's brother Gordon Winslow, Jr. Served from 1866 to 1888 as an officer in the United States Regular Army. The item "Civil War CDV Rare Zouave Colonel Cleveland Winslow 5th NY Vols KIA" is in sale since Saturday, May 9, 2020. This item is in the category "Collectibles\Militaria\Civil War (1861-65)\Original Period Items\Photographs".