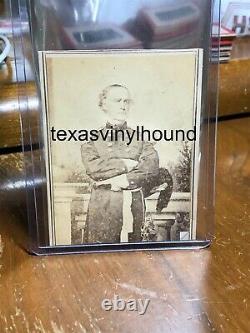 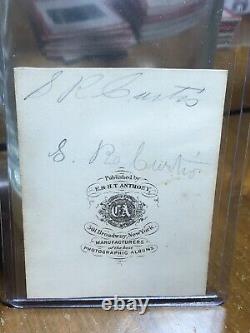 Size 3"x 2.5". Samuel Ryan Curtis began his military career after graduating from the United States Military Academy in 1831. He was sent to Fort Gibson in Indian Territory, and served for one year before resigning from the military on June 30, 1832. Curtis accepted the colonelcy of the 2nd Ohio Volunteers, and led the unit during the war within the army of General Zachary Taylor.

After the war, he moved to Keokuk, Iowa, and was elected to Congress in 1856, where he served three terms. Once the Civil War began, Curtis became the colonel of the 2nd Iowa, but was quickly promoted to brigadier general of volunteers on May 17, 1861, forcing him to resign from Congress. He received command of the Army of the Southwest, which he led to victory over Confederate forces in March of 1862 at the Battle of Pea Ridge in Arkansas. For his achievement, he was promoted to major general. After receiving his promotion, Curtis moved his army further into Arkansas and captured the city of Helena in July.

In September of 1862, he was given command of the Department of Missouri; however, President Abraham Lincoln removed Curtis after Curtis stated abolitionist remarks, offending the governor of Missouri, William Gamble. While in Missouri, Curtis helped stop a Confederate invasion of the state by General Sterling Price at the Battle of Westport.

After the battle, he was given command of the Department of the Northwest, and held the position until the end of the war. After the war, he was commissioned to help negotiate treaties with many of the Plains Indians, as well as work on the construction of the Union Pacific Railroad.