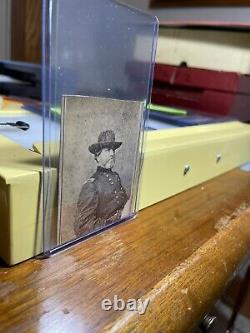 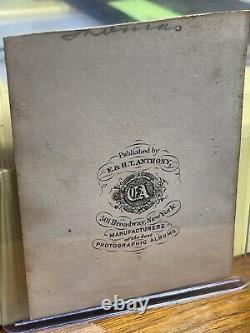 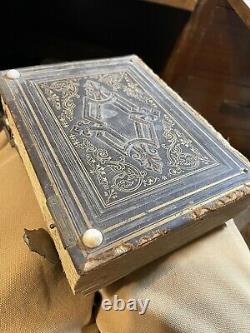 Size 3 1/8" x 2 1/4". Condition 1/2 of image on bottom right corner is missing. Please note this listing includes an image of the album this collection came out of - and may have been trimmed to fit ALBUM IS NOT INCLUDED IN THIS LISTING. At the outbreak of the Civil War, 19 of the 36 officers in the 2nd U.

Cavalry resigned, including three of Thomas's superiors-Albert Sidney Johnston, Robert E. [22] Many Southern-born officers were torn between loyalty to their states and loyalty to their country. Thomas struggled with the decision but opted to remain with the United States. His Northern-born wife probably helped influence his decision. In response, his family turned his picture against the wall, destroyed his letters, and never spoke to him again.

Nevertheless, Thomas stayed in the Union Army with some degree of suspicion surrounding him. On January 18, 1861, a few months before Fort Sumter, he had applied for a job as the commandant of cadets at the Virginia Military Institute.

[24] Any real tendency to the secessionist cause, however, could be refuted when he turned down Virginia Governor John Letcher's offer to become chief of ordnance for the Virginia Provisional Army. [25] On June 18, his former student and fellow Virginian, Confederate Col. Stuart, wrote to his wife, Old George H.

Thomas is in command of the cavalry of the enemy. I would like to hang, hang him as a traitor to his native state.

"[26] Nevertheless, as the Civil War carried on, he won the affection of Union soldiers serving under him as a "soldier's soldier", who took to affectionately referring to Thomas as "Pap Thomas. Thomas, born July 31, 1816, Southampton county, Va. Died March 28, 1870, San Francisco, Union general in the American Civil War (1861-65), known as "the Rock of Chickamauga" after his unyielding defense in combat near that stream in northwestern Georgia in September 1863. This item is in the category "Collectibles\Militaria\Civil War (1861-65)\Original Period Items\Photographs".