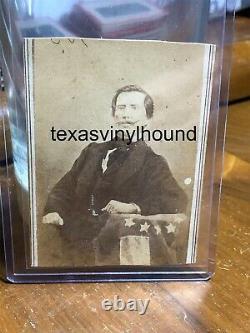 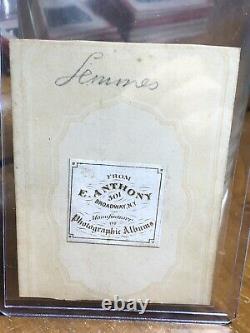 Size 2 1/4 x 3 1/4. Raphael Semmes was born on September 27, 1809 in Charles County, Maryland. He was born into a family of servicemen as he was cousins with Confederate general Paul Jones Semmes and Union Navy captain Alexander Alderman Semmes. Raphael Semmes began his military career in 1826 when he entered the United States Navy as a midshipman upon graduating from the Charlotte Hall Military Academy.

Semmes served during the Mexican-American war as the commander of the USS Somers in the Gulf of Mexico. Semmes continued to serve in the United States Navy until Alabama seceded in January, 1861 at which time he resigned from the Union Navy and sought a position within the Confederate States Navy. In April, 1861, Raphael Semmes was accepted into the Confederate Navy and was initially assigned to serve as the head of the Lighthouse Board. Semmes was very disappointed with this assignment and was able to convince the Confederate Navy to allow him to convert a merchant vessel into a commerce raider, and was named the commander of the newly converted CSS Sumter. After reaching open waters, Semmes began to hunt down Union merchant vessels.

The CSS Sumter, under the command of Semmes, managed to capture eight Union merchant vessels off the shores of Cuba before heading further south towards Brazil where they captured four additional Union vessels. Having made a name for himself during his commerce raids, Semmes was assigned to oversee the construction of a British steam sloop named Enrica. Semmes began his career aboard the Alabama operating around the Azores, a chain of Islands located in the North Atlantic Ocean.

Semmes continued his cruise along the coasts of South America, where he destroyed twenty-nine Union merchant vessels throughout the summer months of 1863. In February, 1864 Raphael Semmes and his crew made their sixty-fifth and final capture.

Unable to use the French controlled dry-docks, Semmes position in the harbor left him vulnerable to a Union blockade. Faced with a difficult decision, Semmes challenged the USS Kearsarge to avoid a full Union blockade, despite preexisting damages to the Alabama. Semmes and his crew struggled to pierce the chain armor of the Kearsarge, and the Alabama began sinking only an hour after the battle began. While the Union forces were able to capture many members of Semmes crew, Semmes was able to escape aboard a British vessel. Semmes remained abroad in both England and Cuba before returning to Mobile, Alabama on November 27, 1864.