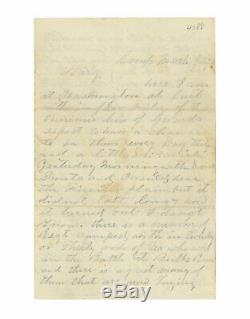 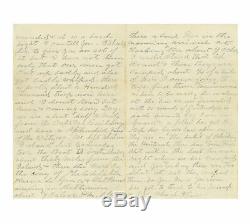 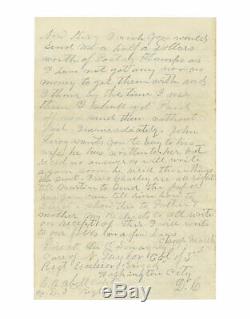 An interesting July 1861 letter written shortly after the Battle of Bull Run by Private Lee ODonoghay of the 72nd New York Regiment, Excelsior Brigade. ODonoghays regiment arrived on the scene in the days immediately after the battle and, writing about the many wounded he say, wrote there is a great many of them that are now laying wounded & it is a hard sight I can tell you. He added: I should like to give you an [account] of it but I have not time only that our men got cut up badly and also got badly whipped. There is probably about a hundred thousand troops now here and I do not know but more & coming every day.

ODonoghay continued how he must be cautious while on guard duty, noting that a fellow has got to keep his eyes & ears open as they are in the habit of shooting the sentinels. He closed the letter with brief notes about fellow Privates John Leroy and Ira L. The letter was written on four pages of a bifolium sheet measuring about 5 x 8. Good condition with some minor foxing and light toning. [I] expect to have a chance to see them every day.

They had a little skirmish yesterday morning with some scouts and I could hear the firing plain, but it did not last long & how it turned out I do not know. There is a number of Regt camped within twenty or thirty rods of us who were in the Battle at Bulls Run and there is a great many of them that are now laying wounded & it is a hard sight I can tell you.

I should like to give you an [account] of it but I have not time only that our men got cut up badly and also got badly whipped. We are about half a mile from the Capital Buildings and have a splendid view of the city, &c. Left there about two in the morning. Arrived at Washington about 9 Oclock.

We have to be ready for an alarm all the time. We are furnished with 30 rounds of cartridges to each man. There has been four shot within the last two weeks right where we are camped and yesterday there was two shot at but they missed them. So you see a person has got to tend to his business & look sharp &c. John Leroy wants you to say to his wife he has written to her but recd no answer. He recd those things she sent. Ira & Charley are all right. Tell Martin to send the paper here. You can tell him how to direct. Show this to Father & Mother. Write on receipt of this. I will write to our folks in a few days. Direct Lee ODonoghay, Camp Marsh, care of N. Taylor, Col of 3rd Regt Excelsior Brigade, Washington City, DC.

Please see my other items for more interesting Civil War letters, documents, and images. The item "Civil War 72nd NY Letter Our men got cut up badly and also got badly whipped" is in sale since Saturday, November 30, 2019. This item is in the category "Collectibles\Militaria\Civil War (1861-65)\Original Period Items\Correspondence, Mail".