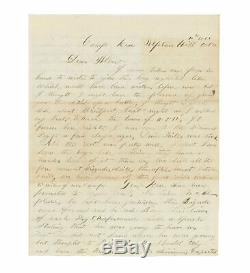 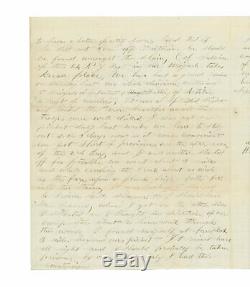 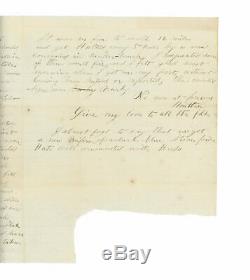 An interesting 1861 letter written from Uptons Hill near Washington by Private Mathew Halpin of the 22nd New York. Halpin hailed from Bridport, Vermont, but enlisted in the 22nds Company K, which was organized across Lake Champlain at Port Henry.

It is no surprise, then, that Halpin mentioned having visited some of the Vermont regiments, including the 4th Vermont. He then described participating in brigade drill each morning and battalion drill each afternoon.

The General gave a parting address to the troops, saying that he was going to leave us, that he did not know where he was going but thought to Missouri (he was transferred to McDowells Corps and by spring commanded the 4th Army Corps). Keyes continued that he expected to have a battle pretty soon, [and] hoped that if he did not come off victorious he should be found amongst the slain. Halpin noted that Colonel Timothy Sullivan of the 24th New York was now in command of the brigade. He describes an impressive review before recounting an unfortunate situation he found himself in while out on picket. Seeking food well beyond Union lines, he and another soldier stumbled through the dark and fell off a bridge and into a creek. It was lucky I learned to swim last summer or I should have been drowned, he wrote.

He pulled himself onto shore and walked in what he believed was the right direction, but. After about [a] 2 hour walk through the woods, I found myself at Fairfax 3 miles beyond our picket.

It rained hard all night and I should probably be taken prisoner by our picket, only I had the countersign. It was no fun to walk 12 miles and get halted every 5 rods by a man concealed in under-brush. I expected some of them would fire and I felt glad next morning when I got on my post without having been missed or reported. Halpin closed his letter with a postscript that we got a new uniform of a dark blue [with] stove pipe hats well ornamented with brass. He would later be promoted sergeant and was mustered out with the regiment in the summer of 1863. That fall he enlisted as a private in the 2nd New York Veteran Cavalry, serving with that regiment through the end of the war. The letter was written on three pages of a 4-page bifolium sheet measuring 7 1/2 x 9 1/2. It is in very good condition with light foxing and some uneven toning. A 5 1/2 x 2 section of paper has been previously removed from the bottom of page 3-4, but none of the letters text was lost.

Includes the original cover with stamp area removed (not pictured). Camp Keyes, Uptons Hill, Oct the 11th 1861. I now take my pen in hand to write to you this long neglected letter which would have been written before now, but I thought I might have the pleasure of giving you the details of a battle.

I thought a good deal about Bridport last night as I walked my beat between the hours of 11 & 12. I was over to the Vermont Regts a few days ago. [Private] Dan Mills [of the 4th Vermont] was sick.

All the rest was pretty well. I dont know how the boys like soldiering. They have a harder time of it than we. We drill all the forenoon at Brigade drill, the afternoon at battalion drill. We have burned all the fence rails within 2 miles of our camp.

Keyes has been promoted to Major Genl. The Brigade was formed and he rode along the lines of each Regt. He afterwards made a speech stating that he was going to leave us, that he did not know where he was going but thought to Missouri. [That] He should try and have this Brigade in his division. [That he] Expected to have a battle pretty soon, [and] hoped that if he did not come off victorious he should be found amongst the slain.

Sullivan of the 24 N. Regt in our Brigade takes Keyess place. We have had a grand review on Saturday last. Our whole division containing 5 Brigades of infantry, 1 Battery of Artillery, and 2 Regt of Cavalry.

It was a splendid sight and looked the more beautiful as all the troops were well drilled. I was out on picket duty last week.

We have to stay out 2 or 3 days now as it comes convenient we got short of provisions on the afternoon of the 2nd day, and I and another started off for potatoes. We went about 3 miles and while crossing the creek about as wide as the fare upon a plank bridge, both fell into the stream.

It was lucky I learned to swim last summer or I should have been drowned. When I got on the other side I started as I thought in direction of our camp. Give my love to all the folks. I almost forgot to say that we got a new uniform of a dark blue [with] stove pipe hats well ornamented with brass. Please see my other items for more interesting Civil War letters, documents, and images.

The item "Civil War 22nd NY Letter I found myself at Fairfax 3 miles beyond our picket" is in sale since Sunday, November 10, 2019. This item is in the category "Collectibles\Militaria\Civil War (1861-65)\Original Period Items\Correspondence, Mail". The seller is "iron-horse-sales" and is located in Champaign, Illinois.