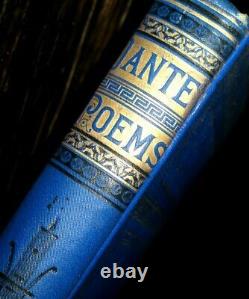 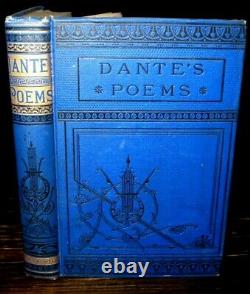 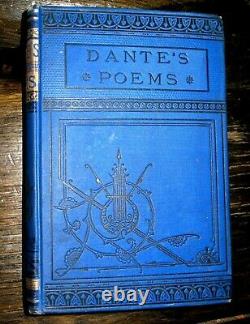 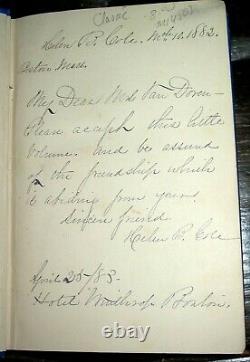 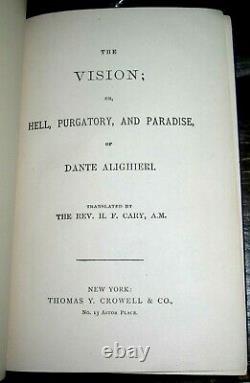 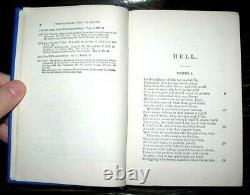 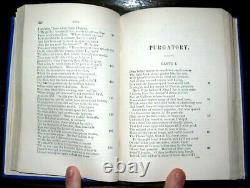 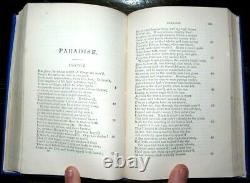 Victorian era copy of Dante's classic with fancy gilt and black décor on electric blue spine and covers, as shown. Externally in good shape with some rubbing to the extremities, hinges holding, binding and page clean and firm.

Inscribed on upper endpaper by a Civil War nurse, close friend of Abe Lincoln and Sheboygan WI heroine Helen B. Cole, else unmarked (see below). Helen was a popular figure in Washington and counted many famous people among her friends and acquaintances. Among them were John Greenleaf Whittier, Charles Dickens, Harriet Beecher Stowe, General and Mrs.

Ulysses Grant, Horace Mann, Oliver Wendell Holmes, Theodore Roosevelt and Mary Baker Eddy, even studying Christian Science under the guidance of Mrs. Frighteningly, she also, just days before the events at Ford's Theater, played a game of Whist with John Wilkes Booth over an afternoon, never imagining what was on his wicked mind! S hining and beautiful, and loaded with history. FROM A SHEBOYGAN WI HISTORIAN ARTICLE.

For generations after, the sight of wooden-legged and empty-sleeved veterans would cast a sobering note among the gathering places of the community. But, it also gave one of our local girls the chance to play a part in the drama that was center stage in 1865 Washington, D. Helen Brainard was born in 1838 in Oneida, New York.

Her family traced its history in the United States back to 1662 with the founding of Haddam, Conn. The Brainards moved west to Sheboygan Falls in 1846 where Helen married William Cole, the son of Charles and Sarah Cole in 1858. Marital bliss quickly turned tragic when less than a year later William died from tuberculosis. With the Civil War raging, and Helen's father and brother already enlisted in the conflict, she was determined to serve her country in some capacity.

Men were the original Civil War nurses as women were generally thought to be too frail to cope with the rigors of caring for the wounded. Yet, thousands of women demanded to serve as volunteers. Very quickly they went from sitting on the sidelines to managing the care of the soldiers.

The face of nursing was about to change. After the carnage of Bull Run, Clara Barton and Dorothea Dix organized a professional nursing corps and Helen Brainard of Sheboygan Falls volunteered.

Not yet 21 years of age, her offer of hospital work was refused; only women 30 years and older were accepted. But, ever capable and persistent, Helen secured an appointment as secretary to Miss Dix, which eventually led her to becoming a nurse at Campbell Hospital in Washington, D. It was there that Helen first met President Abraham Lincoln. Lincoln spent a great deal of time visiting the wounded; Mrs. Cole described him as being everywhere.

She remembered him as talking about the soldiers and their suffering and how he wished he could help them. He was so kind, so good and so great, she said.

Always the "ordinary guy, " Helen once caught him cutting himself a piece of strawberry shortcake and then sitting down on the floor in a corner to enjoy the treat, perhaps taking a momentary break from his war worries. When Lincoln's impetuous, wild child, Tad, became ill, Helen was one of the nurses who cared for him. She was even given the gift of clothing by Mrs.

Lincoln in thanks for her service. Frighteningly, she also, just days before the events at Ford's Theater, played a game of Whist with John Wilkes Booth over an afternoon, never imagining what was on his wicked mind. After the Civil War ended, Helen went to Memphis to close a hospital for African American veterans. Next she worked at a home for "unfortunate women" in Boston. The health of her aging parents finally called Helen back to Sheboygan Falls.

There she would sit in her favorite corner of the lobby and greet friends who came to pay their respects. A familiar figure at all of the local gatherings of Civil War veterans and patriotic and military societies, Helen appeared at all of the state encampments of the Grand Army of the Republic (GAR) and worked hard for their causes. 19, 1931, Helen fell on the stairway at the Grand Hotel and broke her hip.

She died a short time later at the fine age of 93. A granite boulder-style monument honoring Helen was erected in 1933, just two days after she died. It still stands near the corner of Martin Avenue and Calumet Drive in Sheboygan honoring our local girl who was a Civil War nurse and so much more. The item "C1880 DANTE Victorian INFERNO Hell PURGATORY Paradise DIVINE COMEDY Civil War" is in sale since Saturday, January 23, 2021. This item is in the category "Books\Antiquarian & Collectible".

The seller is "mantosilver" and is located in Spencerport, New York. This item can be shipped worldwide.