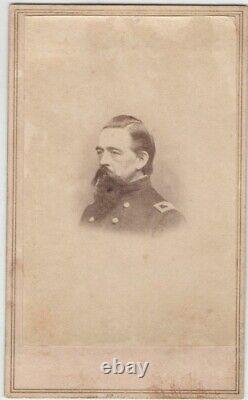 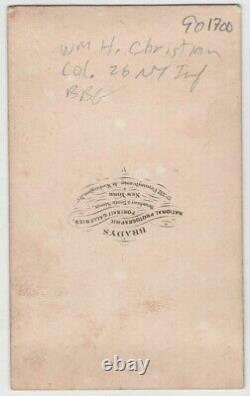 Despite his abject cowardice at the Battle of Antietam (he dismounted and abandoned his brigade - 2nd Brigade, 2nd Division, 1st Corps - and resigned two days later) he was brevetted Brigadier-General on 13 March 1865 "for gallant and meritorious services during the war"! The following biography is taken from Find A Grave. Civil War Union Brevet Brigadier General. Perhaps the one Union officer who least deserved a brevet Brigadier Generalship, he was a surveyor and civil engineer post-Civil War.

During the Mexican War, he served in the 1st New York Volunteers, becoming proficient in military parade drill and discipline, and rose to 1st Sergeant even though the unit never saw combat. He was active in the militia in the time between the wars in his native Utica, New York, When the Civil War began he recruited men for the Union war effort in and around Utica, and raised the regiment that became the 26th New York Volunteer Infantry.

Commissioned its Colonel and commander on May 29, 1861. Despite his Mexican War and militia background, his acumen proved wanting when active campaigning began. In October 1861 men under his command were detailed to capture Confederate cavalry that was encamped near their positions, and the operation failed in such a way that Colonel Christian was brought up on charges by brigade commander Brigadier General Henry W.

The court of inquiry on the charges never materialized, but the 26th New York was assigned to garrison Fort Lyon in the Washington, DC defenses. They would remain there until May 1862, when they were assigned to the Army of the Potomac's I Corps, which had been tasked to remain in the Washington, DC area while the rest of the Army fought in the Peninsular Campaign near Richmond, Virginia. When the 26th New York Infantry finally saw combat with the Confederates during the August 1862 Battle of 2nd Bull Run, their commander, Colonel Christian, remained in the rear with the claim of sickness, only to return to the unit after the fight was over.

He also assumed command of the brigade as senior Colonel when Brigadier General Zealous B. Tower was wounded in the battle. At the September Battles of Chantilly and South Mountain, his brigade was lightly engaged, and he performed credibly if not remarkably.

During the opening phases of the September 17, 1862 Battle of Antietam, he directed his brigade into battle, only to find them halted by intense Confederate artillery fire. At that point he abandoned his command, running the East Woods area, leaving his men leaderless under the intense rebel fire.

It took Division commander Brigadier General James B. Ricketts, who had been wounded already, to sort out the situation and assign another officer to lead Colonel Christian's men and get them moving.

At the end of the day, General Ricketts' demanded of Colonel Christian either face a court-martial on charges of cowardice in the face of the enemy or resign. Though the rest of the war William Henry Christian tried to return to the army, even proposing at one point to serve without pay, but his previous actions prevented any possibility of it. On March 13, 1865, possibly to placate him in his effort to erase the stain of cowardice, he was brevetted Brigadier General, US Volunteers.

His actions haunted him through the rest of his life, causing great bouts of depression, affecting his family, and eventually ruining his civil engineering career. He was finally committed by his wife to the New York State Lunatic Asylum at Utica, where he died in May 1887. His "showing the white feather" is chronicled in online blogs.

Christian can be found on. Condition as shown, Brady backmark. This item is in the category "Collectibles\Militaria\Civil War (1861-65)\Original Period Items\Photographs".