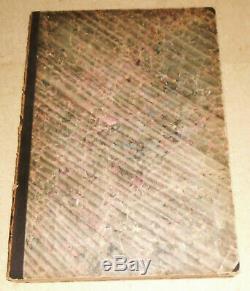 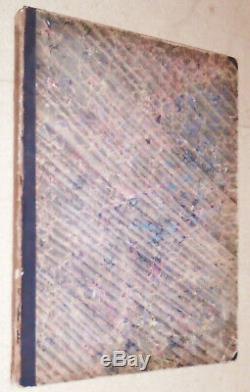 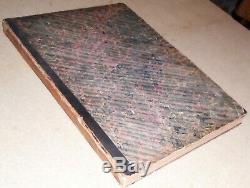 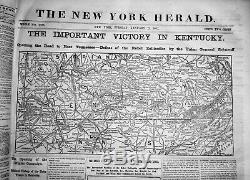 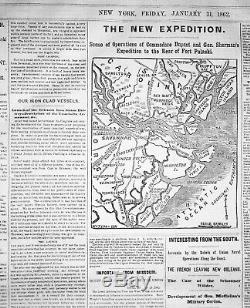 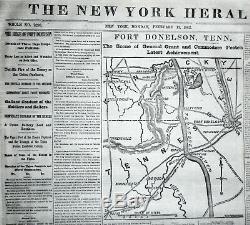 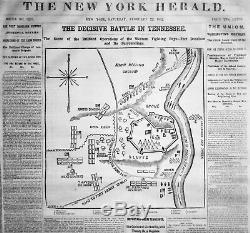 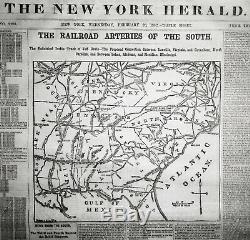 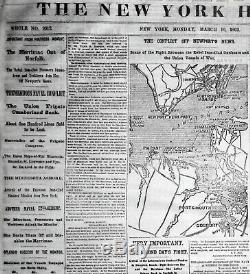 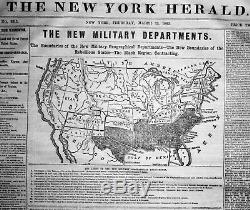 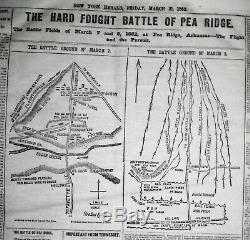 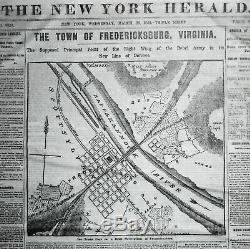 Bound THE NEW YORK HERALD for January 1 through March 31, 1862. Although the binding and boards are well-worn. The backstrip on the spine has been worn away and the boards are loose, but the newspapers themselves are in fairly good condition and the binding of these newspapers is fairly strong, mindful that there was very little space available on the edges of the newspapers for the binder to bind these newspapers together. The only handwriting I could find on any of the pages is some "antique" handwriting in pencil at the top of Page 5 of the January 22nd issue.

On the otherwise blank front flyleaf is handwritten in pencil someone's name, which I believe is Alfred M. Heckel, " his city, "Allentown, " presumably Pennsylvania, and "May 2nd 1865.

There are very few tears on the pages other than minor tears at the edges and a couple of times there are pages attached to each other, but disbound (see below), apparently because of the limited space on the pages that could be used by the binder. I do not believe it was, which would explain the "missing" issue numbers in the inventory below. There are no Sunday newspapers bound within this volume, but the publisher always assigned an issue number to the newspapers that would have been published each Sunday. Accordingly, the inventory here below lists the date of each newspaper contained within the volume, the day of the week the newspaper was published, the issue number, and the number of pages that comprise the issue. The sequence of issue numbers is broken after Issue #9327, which is the Tuesday newspaper. The Wednesday issue is identified as Issue #9329, so presumably there is no missing issue and this missing "#9328" is due to the publisher's error. Another publisher's error may have occurred following Issue #9302, a Saturday issue.

Normally the following Monday's newspaper would have been assigned #9304, but instead the publisher assigned #9305 to the Monday issue as if there had been two newspapers published the previous day, a Sunday. Most issues consist of eight pages. A few consist of 12 pages and the publisher describes these as "Triple Sheet" issues. Usually these "Triple Sheet" issues are bound with Page 11/12 out of order. All issues appear to be complete, except the March 29th issue, which is missing Pages 1/2 and 11/12.