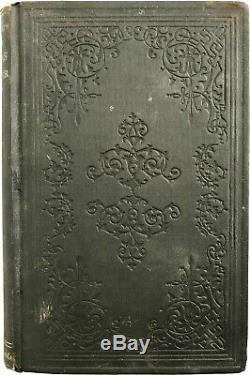 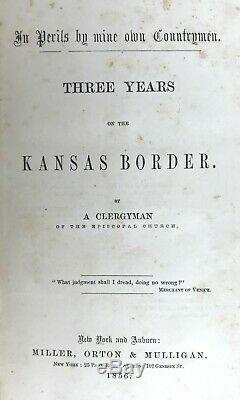 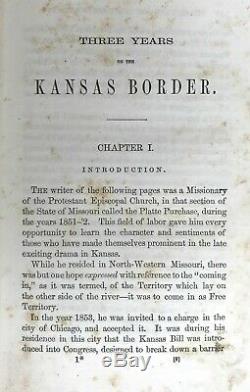 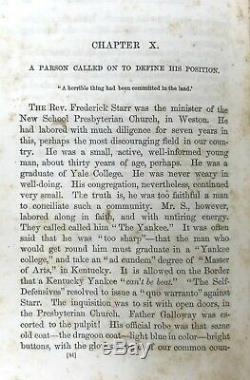 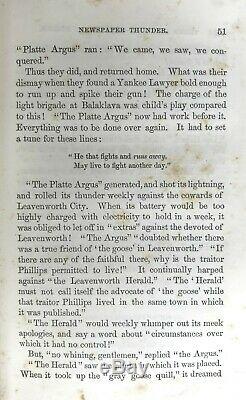 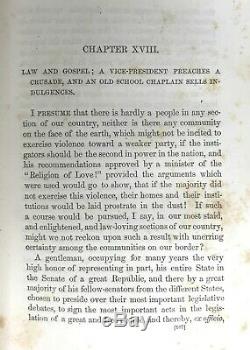 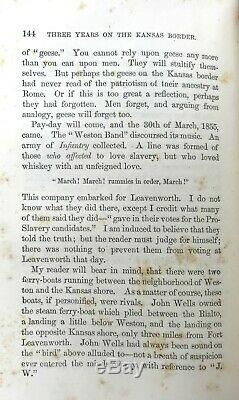 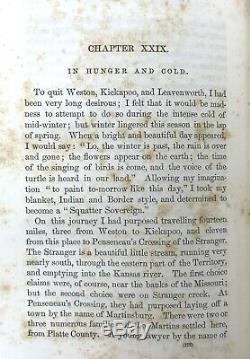 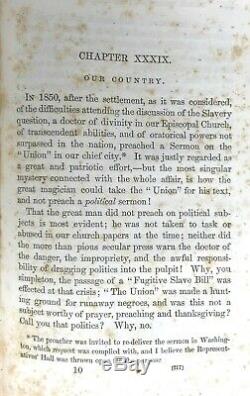 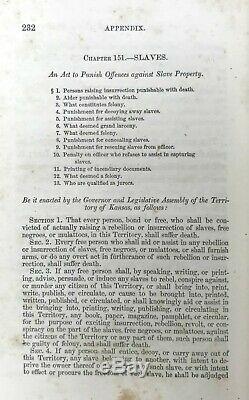 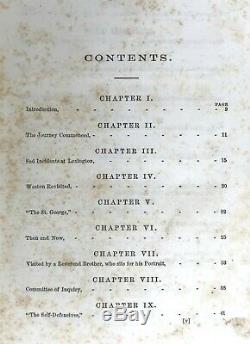 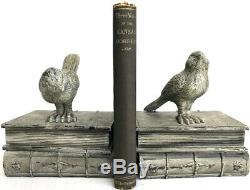 YOU'LL LOVE THIS BOOK!! The unnamed writer of this book was a Missionary of the Protestant Episcopal Church. He found himself called to work along the Kansas border during an interesting time in the region's history.

The Kansas-Nebraska Bill, which would formally create the territories, was introduced into Congress and stirred up controversy between pro- and anti-slavery groups. The author, being quite against slavery, became interested in the fate of the territory.

In 1854, after seeking permission from the Church, he was appointed to the territory as a missionary. He set out with his wife and infant daughter in October of that year. This work is an account of his three-year adventure there, and, despite seeming unbelievable at times, he insists it is an entirely true record of facts. This book is an interesting perspective on the events which eventually led to the American Civil War. The author resided in the region during the early years of the Border War, also called " Bleeding Kansas , " a period of violent conflict between pro- and anti-slavery factions.

The History of the Kansas-Nebraska Act. The KansasNebraska Act of 1854 was designed to create the territories of Kansas and Nebraska. The bill was initially introduced with the goal of opening up new lands to development, specifically for the construction of a transcontinental railroad. However, when the bill also effectively repealed the Missouri Compromise, fiery national tensions over slavery were stoked.

Early on, the bill faced opposition from Southern leaders who refused to allow the creation of territories that banned slavery, which would have been the case as the Missouri Compromise outlawed slavery north of latitude 36°30' north. To win the support of Southerners, the bill was revised to repeal the Missouri Compromise, with the status of slavery instead decided on the basis of popular sovereignty , allowing the citizens of each territory, rather than Congress, to determine whether or not slavery would be allowed. After the passage of the act, pro- and anti-slavery groups flooded into Kansas with the goal of establishing a population that would vote either for or against slavery respectively, resulting in a series of violent armed conflicts known as Bleeding Kansas. Popular sovereignty backfired, and rather than bringing an end to the national debate over slavery, the KansasNebraska Act only heightened tensions, which ultimately lead to the American Civil War. Published in 1856 , it is in GOOD+ CONDITION! For its age and especially to be 164 YEARS OLD!!! And tightly bound with no tears on the pages or destructive markings. There does appear to be a page torn out ahead of the title page, and there is some light foxing on the pages, as is normal for a book of this age. It measures 5" x 7 1/2" and is complete with 240 pages. GET IT WHILE YOU CAN!! Please see our other books too! The item "BLEEDING KANSAS BORDER Nebraska Bill SLAVERY Civil War Rebel Missouri Compromise" is in sale since Thursday, May 21, 2020.