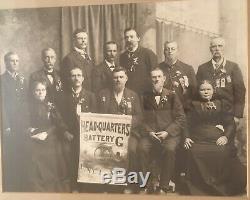 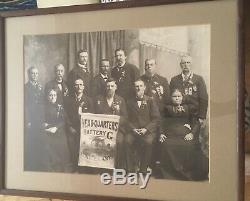 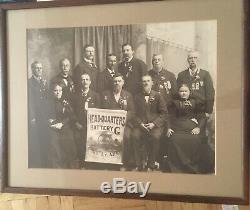 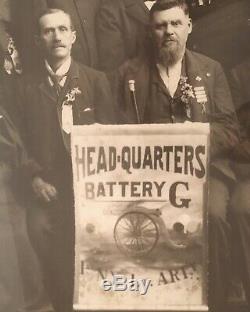 Large antique cabinet photograph, depicting veterans of Battery G, 1st New York Light Artillery, which served in the Union Army during the Civil War. The regiment was organized at Elmira, New York, mustered into service in October 1861, and served for the duration of the war. They are posing with a banner of their unit, this was probably a GAR post. Matted and framed under glass. Photograph measures about 12" x 15.75" [sight] and 16.5" x 20.75" in frame.

For muster in and out dates, see individual batteries. This regiment was organized at Elmira to serve three years; it received its numerical designation October 16, 1861. Eight companies, commanded by Col.

Bailey, left the State October 31, 1861, Companies I, K, L and M November 21, 1861. At the expiration of its term of service, those entitled thereto were discharged, and the regiment continued in service. Its service was as light artillery and by batteries in the Armies of the Potomac, Virginia, the Cumberland and Georgia.

It was honorably discharged and mustered out, under the command of Capt. McClellan, June 19, 1865, at Elmira. The item "Battery G-1st New York Light Artillery-ELMIRA-Antique CIVIL WAR Large Photo- GAR" is in sale since Saturday, July 11, 2020.

This item is in the category "Collectibles\Militaria\Civil War (1861-65)\Civil War Veterans' Items". The seller is "parklife-estate-sales" and is located in Bronx, New York. This item can be shipped to United States.