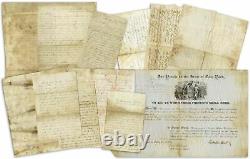 Unique collection of eleven letters and a military appointment by five brothers who write to each other, all fighting in the Civil War. Six letters are by Alvosade Lansing, Corporal in the 23rd New York Infantry, Co.

H, who fought at Antietam, and describes it in a letter dated 21 September 1862 from "Camp of Hooker's Corps near Sharpsburg, M-d". He writes, Dear Brother, Ihave been in the two last great battles. I will try and give something of a description of what I saw and heard of the one fought last WednesdayThere was some shelling and some skirmishing on Tuesday.

On Tuesday night our regiment was picketing a road leading from Boonesburough to Sharpsburg and was near the extreme right of our line. At intervals during the night the skirmishers in position exchanged volleys of musketry. Just on our right, one of our batteries came up and took position on the gentle slope of a small ridge, but a few rods from where we lay. The guns were unlumbered and elevated. The gunners stood beside their pieces with rammer and swab. The cannons sat on the trails and the captain with the watch in his hand stood watching a cornfield on the crest of the hill in the distance.

It began to grow light. Another battery came and were wheeling into position on top the ridge back of us and to our left when we were startled by the sudden reports of cannon from the hillWiz Wiz came load of shells bursting almost directly over us quickly followed by others spitefully cutting through the tree tops and sending pieces humming in all direction as they exploded. The captain of the first battery had counted time from the first lash and as the shell burst cried to the gunners, give them four seconds. The fuses were cut to the required mark and in less time than it has taken me to write it the brass guns were giving the rebels rapid doses of shell and case shot.

The other battery soon opened fire and then such crashing and whizzing who ever often heard. The rifle cannon bolts screamed madly by each other as they spent through the morning air. They slashed off huge branches from the oaks to our right and sometimes choked their horned howles with a dull'chug' in the bank to our left.

But our batteries soon shut the rebels thunder up and all again seemed so very quiet when bam bang t r r r r r a rattle of musketry from the woods on our right and we knew that the infantry were at it. The batteries limbered up and as they were moving away to take other positions oh, I saw that one rifle piece was disabled and slung under its lumber. He continues in the same letter, We joined our Brigade and then moved toward the scene of action. Passing through an orchard the minnies began to sing over us and rising to the crest of a hill could see where Hatcher's Brigade of our Division were engaged with the enemy in a large field of corn. We moved to their right and towards a piece of wood on the same ridge that the enemy was on.

The powder drifted down from the corn and darkened the air so that we could see but a little ways. And there was such a roar of muskets and cracks of cannon that we could hardly hear a word of command. Our skirmishers moved through the woods but no enemy was in sight so Gen. Patrick swung the brigade around to the left, bring it facing the flank of the rebels in and back of the corn.

Came into a good position behind a high stone fence. The 7th Indiana lay behind the wall and were loading and firing into the corn. We mixed with them and blazed away. The Rebels began to run and then I saw their flag and fired at it. We set up a great shout as the enemy fled to the woods in their rear. Our division was relieved by another and our brigade moved a short distance to a spot rather safe from cannon shot and the Gen told us to get coffee. The enemy scouts telegraphed our position to one of their batteries which began to send us case shot, which burst precisely over uswe moved back to the woods to get out of range. The shells had done us but little damage, but a bullet went through the ankle of a man lying in reach of me.

I heard it as it came and struck him. A long line of men moved towards the woods when the enemy had taken cover. The rebels had been reinforced and opened on them with heavy volleys.

The line was composed mostly of raw troops that soon broke and came scattering back followed hotly by the elated foe loading & firing as he came. Our line fell slowly back. The rebels came into range of grape and then our batteries began to plough their confused line - they hesitated. I could plainly see them tumble right and left and finally saw them scattering back to coverSometime in the afternoon a few wagons that had brought us rations from the train were standing on a ridge behind which we play when a rebel battery opened on them. One shell burst and a piece of its trunk tore a knapsack on which Tom Dodd & William McHewitt were resting their elbows.

Another struck in a cluster of men on the bank. If I had some good paper I would write a letter to Dixon of the Republican and I think he would print it. Five letters in the collection are written by Alvorado Lansing in the 11th Iowa Infantry, and by Corenelius and Alexander Lansing, both officers in the 157th New York Infantry, Co. Was laid low by Rebel balls. But they had the satisfaction to see as many of the Rebs fall before they did. We left last Sunday at 2 A. Trecked all day & all night, all of the next day & night. That morning we got to John's Island was on the point of crossing the bridge when the Rebs let fly at us. We halted and threw out our skirmishers & then went in with a will. There was an old factory just across the bridge behind that our boys took shelter and poped away. The Rebs was soon 29 rods off behind a hedge built for a fence.

We could not dislodge them from their cover no other way but than charge on them so away we went full well after them. They stood their ground then had got within some ten yards of them when they took off and run for the woods.

We started after them on double quick time had a smart run for three miles when we came up on their amnion force when we had to stop. Soon out [came] a section of a battery and opened on us, but did no damage to us. At last night came on and we fell back to our line of rifle pits and rested for the night. That night the Rebs stole a march on the Dutch that was on picket & got 20 of them at one haul.

Damn the Dutch that get scared and don't know what to do. The next day our Regt. Was ordered to the front.

We staid there all day & did not lose but one man. That night we were on picket but was not disturbed there was some firing at rabbits & some at trees. Dennis Donahue fired 2 shots at a tree or something else. He called me up to him and said to me. Don't you see that man off there under that tree.

I told him I did not. Well, he said he did and bang went his gun. I told him not to shoot again unless he sees a man but it did no good for I had but got out of sight before he let fly again and so it went.

About two in the morning we drew off and started for home. We burned all the buildings we could find" In another letter dated 4 March 1863 from Acquia Creek, Alex Lansing writes about the effect of England on the blockade and then states, "The feeling in the army is now a great deal better than it was six weeks ago.

I think then it would have been very hazardous to have risked a battlethe people will soon begin to clammer if there are not 15 or 20 thousand more men slaughtered soon. Alvosade writes again on 12 December 1861, this one to the fifth brother serving in the 76th New York Infantry, recently wracked by the shooting of its Major Andrew J. McNett by its Colonel Nelson Green. Alvosade writes, Dear BrotherI was very anxious to hear from you, so as to get at the truth of that shooting affair.

We got the report here that your Major was shot and mortally wounded. We hear that Green is feared by all his officers, but your letter shows things in a different light.

Some here think that the 76th will break up; but I do not think that wayTo-day we were inspected by one of McClellan's staff, a Frenchman, one of the Orleans Princes. He does not speak very good English, but FrenchI got a good view of McClellan. I saw him on his feet.

His jaws are square something like those of Henry McKevett. His mustache and Imperial are inclined to be redish in color, but such an eye! I never saw anything like it. Strange to see a Gen. In chief without a cocked hat and gaudy plumes. Strange that he wore no showy chains or epaulette. William Lansing's military appointment accompanies the letters, which come with full transcriptions. The item "3rd New York Infantry Co. H Fought at Antietam 6 Civil War Dated Content Letters" is in sale since Saturday, January 2, 2021.