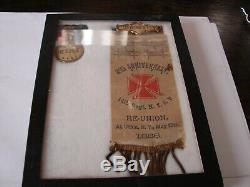 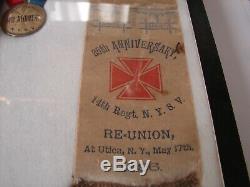 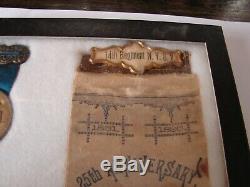 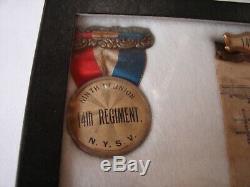 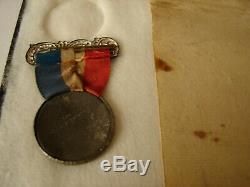 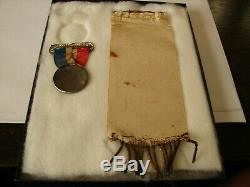 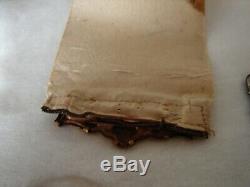 Up for consideration are these 2 Reunion Ribbons from the 14th Regiment New York State Volunteers. The ribbons are original and from their 9th and 25th Reunions. They are in very good well preserved condition, See pics for additional information. The regiment existed from 1861 until 1863, at which time the "two year men" were discharged, and the "three year men" were transferred to the 44th New York Volunteer Infantry Regiment.

The 14th New York Volunteer Infantry experienced 270 casualties during its two year existence with the Army of the Potomac. The 14th New York Volunteer Infantry saw the bulk of its action during the Seven Days Battles. The regiment was engaged at Beaver Dam Creek. June 25, 1862, and was involved in the defense of the Union. Left flank at the Battle of Malvern Hill. June 30, 1862 under Brigadier General Charles Griffin. In these engagements, and particularly in the Battle of Gaines's Mill. The regiment suffered 225 dead and wounded, which comprise 83% of the total of 270 casualties suffered during the 14th's civil war service. During the Battle of Antietam. The regiment was held in reserve approximately one mile east of the Middle Bridge; most of the rest of the Union V Corps.

Was also held in reserve on September 17, 1862. During the Battle of Fredericksburg. The regiment was involved in the assaults on the Confederate. Positions atop Marye's Heights.

On December 13, 1862, but their involvement was marginal and the regiment did not receive losses as great as other units, having 5 dead and 30 wounded. The men who had enlisted in the 14th in 1861 for 2 years were mustered out in June of 1863 but the "three years' men" of the 14th were joined to the 44th New York Volunteer Infantry Regiment.

Just in time to be engaged in the 44th Regiment's intense combat at Little Round Top. During the Battle of Gettysburg. The item "2 CIVIL WAR Reunion Ribbons 14th Regiment New York State Volunteers 9th & 25th" is in sale since Tuesday, July 28, 2020.