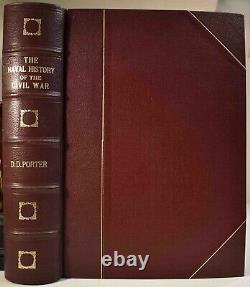 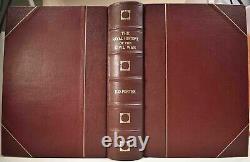 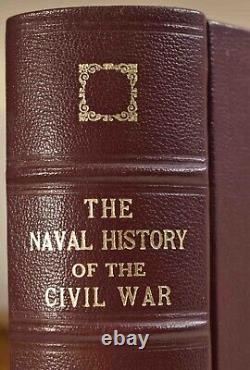 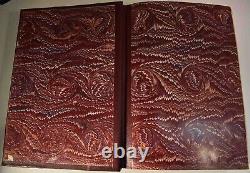 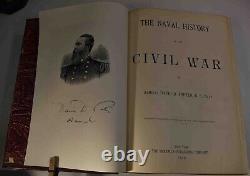 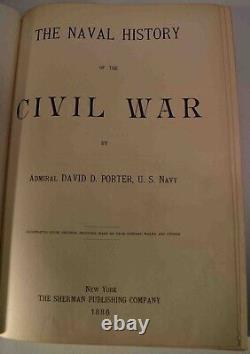 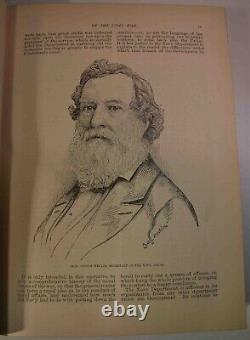 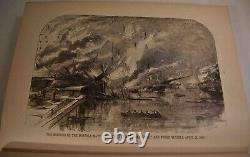 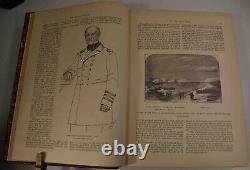 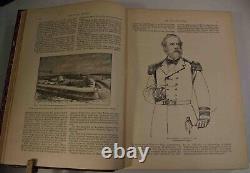 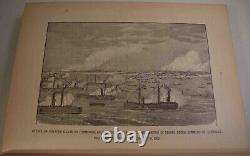 THE NAVAL HISTORY OF THE CIVIL WAR. Written by Admiral David D. Illustrated from original sketches by Rear-Admiral Walke and others. Published by The Sherman Publishing Company, New York. This book looks like new on the outside so, although it is very similar to the 3/4 bound editions I have seen, I suspect it may be rebound.

Although essentially without any major flaws, the book was missing the steel-plate frontispiece of Porter when I came across it. I have replaced it with an exact copy, albeit a high quality scanned copy and not a steel plate engraving. David Dixon Porter (June 8, 1813 - February 13, 1891) was a United States Navy admiral and a member of one of the most distinguished families in the history of the U. Promoted as the second U.

Navy officer ever to attain the rank of admiral, after his adoptive brother David G. Farragut, Porter helped improve the Navy as the Superintendent of the U. Naval Academy after significant service in the American Civil War.

Porter began naval service as a midshipman at the age of 10 years under his father, Commodore David Porter, on the frigate USS John Adams. For the remainder of his life, he was associated with the sea.

Porter served in the Mexican War in the attack on the fort at the City of Vera Cruz. At the outbreak of the Civil War, he was part of a plan to hold Fort Pickens, near Pensacola, Florida, for the Union; its execution disrupted the effort to relieve the garrison at Fort Sumter, leading to Sumter's fall.

Porter commanded an independent flotilla of mortar boats at the capture of New Orleans. Later, he was advanced to the rank of (acting) rear admiral in command of the Mississippi River Squadron, which cooperated with the army under Major General Ulysses S. Grant in the Vicksburg Campaign. After the fall of Vicksburg, he led the naval forces in the difficult Red River Campaign in Louisiana.

Late in 1864, Porter was transferred from the interior to the Atlantic coast, where he led the U. Navy in the joint assaults on Fort Fisher, the final significant naval action of the war.

Porter worked to raise the standards of the U. Navy in the position of Superintendent of the Naval Academy when it was restored to Annapolis. He initiated reforms in the curriculum to increase professionalism. In the early days of President Grant's administration, Porter was de facto Secretary of the Navy.

When his adoptive brother David G. Farragut was advanced from rank of vice-admiral to admiral, Porter took his previous position; likewise, when Farragut died, Porter became the second man to hold the newly created rank of admiral. He gathered a corps of like-minded officers devoted to naval reform. First edition 3/4 leather hardcover.

This huge and beautiful book is in fine condition-highly unusual for its age. The text block is for sure original with all pages (except the original frontispiece) present.

The original frontispiece was missing and I have replaced it with a nearly exact scanned copy and have bound it in so that (hopefully) only book geeks like me will notice. The paper is somewhat tanned with age, but is not brittle. The page edges are marbled. The endpapers are marbled and may well be the original ones as they match nearly exactly the endpapers I have in another copy. There is an embossed owner stamp in the lower corner of the second blank endpaper. The book is really in amazing condition overall. ALL ITEMS ARE CAREFULLY AND SECURELY PACKED TO REDUCE OR ELIMINATE DANGER OF CRUSHING AND OR WATER/MOISTURE DAMAGE. I PERSONALLY GUARANTEE ALL OF THE BOOKS, AUTOGRAPHS AND SIGNATURES ON BOOKS I SELL. This item is in the category "Books & Magazines\Antiquarian & Collectible". The seller is "tstivers" and is located in this country: US. This item can be shipped worldwide.