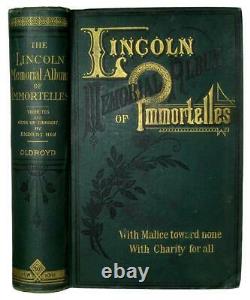 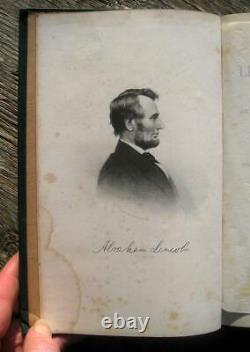 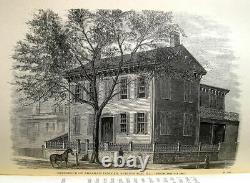 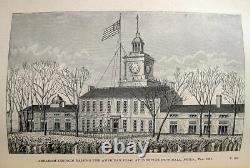 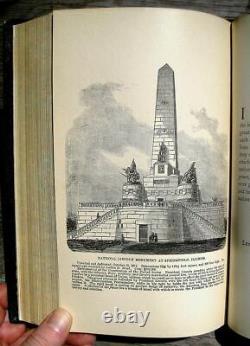 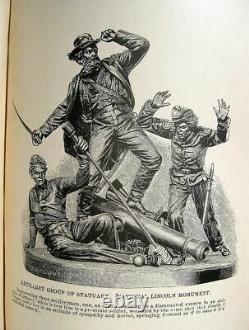 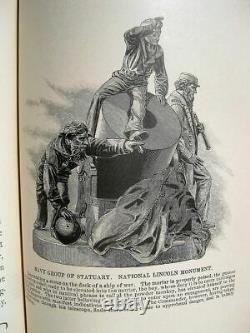 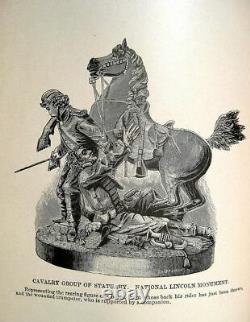 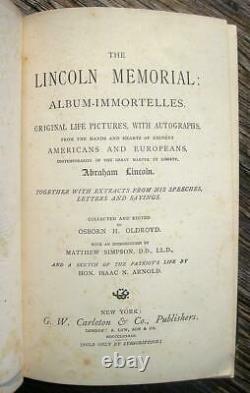 THE LINCOLN MEMORIAL ALBUM OF IMMORTELLES. Original Life Pictures, With Autographs, From the Hands and Hearts of Eminent Americans and Europeans, Contemporaries of The Great Martyr to Liberty, Abraham Lincoln. Together with Extracts from His Speeches, Letters and Sayings. Collected and Edited by Osborn H. Published in 1883 by Gem Publishing House, Chicago.

9 x 6 cloth hardcover decorated with gilt. Exterior as shown in photo. Text is clean and complete. Slight moisture blemish on frontispiece only.

No torn, loose or missing pages. Great example of this rare Lincoln/slavery title. This is a stately collection of abstracts from the written and spoken record of one of Americas greatest Presidents, Abraham Lincoln. What sets THE LINCOLN MEMORIAL: ALBUM-IMMORTELLES apart from other collections of this type is that the material in this book is drawn directly from the official texts: from Lincolns addresses and speeches, his letters, his messages and dispatches. There is nothing anecdotal here. No hearsay, no folk tales. This is Abraham Lincoln on the record, in the words he left to history. Naturally you will find in this collection the words that left an indelible mark upon our nation: the Emancipation Proclamation, the Gettysburg Address, and Lincolns A House Divided speech, to name a few.

But you will also find many quotes from lesser-known documents that shed valuable light on Lincolns wisdom, humanity and religious conviction. These include letters, interactions with congressmen, and responses to requests from private citizens.

Personal Conference with the Representatives from the Border States. Reply to a Religious Delegation. Abolishing Slavery in the District of Columbia.

Reading the Emancipation Proclamation to his Cabinet, September 22, 1862. Reply to the Resolutions of the East Baltimore Methodist Conference of 1862. To the Synod of Old School Presbyterians, Baltimore. Reply to the Committee of the Lutheran Synod of 1862. Second Annual Message to Congress, December 1, 1862.

Emancipation Proclamation, January 1, 1863. Reply to an invitation to preside over a meeting of the Christian Commission. Reply to address from workingmen, Manchester, England. Remarks made to some friends, New Years Eve, 1863.

From the Letter to Erastus Corning and others. Reply to a Committee of the Presbyterian Church. A Proclamation, July 15, 1863. Presentation of a Commission as Lieutenant-General to U.

Reply to the letter of Governor Seymour, of New York. Address on the Battle-Field of Gettysburg. Third Annual Message to Congress. Speech at a Ladies Fair in Washington. Speech at the Opening of a Fair in Baltimore, April, 1864. Reply to a Committee from the Methodist Conference. Response to a delegation of the National Union League. Speech at the Philadelphia Fair.

From His Letter of Acceptance. To Whom It May Concern. Speech to a Serenading Club of Pennsylvania.

Address to the Political Clubs. Reply to a Committee of loyal colored people of Baltimore.

Remarks to the 189th New York Regiment. Speech to the 164th Ohio. Reply to a Company of Clergymen. Speech to the 148th Ohio Regiment. Remarks to a serenading party at the White House. Remarks to a Delegation from Ohio. Fourth Annual Message to Congress, December 6, 1864. Reply to an Illinois Clergyman. Seward, at the Meeting of Messrs. Stevens, Hunter and Campbell at Fortress Monroe, Va. Second Inaugural Address, delivered March 3, 1865.

Remarks upon the Fall of Richmond. A Verbal Message Given to Hon. Remark previous to attending the theater on the night of his assassination.

Fac-simile of the play-bill at Fords Theater on the night of April 14, 1865. Autobiography of Abraham Lincoln, in fac-simile. Remember folks, this is an 1883 original. This book is 138 years old. Please be sure to add me to your List of Favorite Sellers.

Don't miss out on any of my latest listings. NEETMOK BOOKS IS A REGISTERED MEMBER OF EBAYS VERO PROGRAM.

When you prepare your listings you generally should use only material text, photographs, etc. And trademarks/names that you created or own yourself or licensed from the owners. Item description text; lists of contents, lists of illustrations/photos; scanned images, etc. UNAUTHORIZED USE OF ITEM DESCRIPTION TEXT INCLUDING SUMMARIES OF CONTENTS, ILLUSTRATIONS, ETC.

PHOTOS OR OTHER PROPRIETARY INTELLECTUAL PROPERTY IS STRICTLY PROHIBITED AND WILL BE REPORTED TO EBAYS VERO DEPARTMENT FOR IMMEDIATE ACTION. The item "1883 ABRAHAM LINCOLN MEMORIAL ALBUM Assassination Slavery Civil War Illustrated" is in sale since Sunday, November 21, 2021.