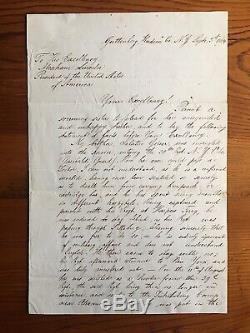 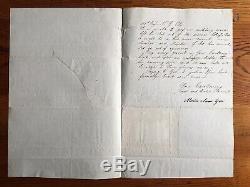 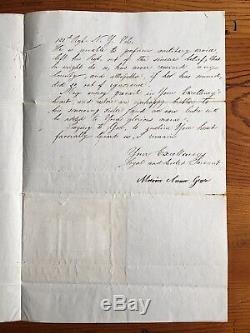 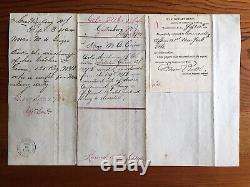 1864 letter addressed to President Abraham Lincoln from an impassioned woman named Marion Anna Geiser of Guttenberg, New Jersey, pleading with the President to pardon her brother Salatin for desertion. Salatin Geiser enlisted when he was 22 years old on September 1, 1861 at Roachs Mill, Virginia as a Private, mustering into "D" Company, NY 39th Infantry.

He deserted in September 1862. To His Excellency Abraham Lincoln President of the United States of America.

Permit a sorrowing sister to plead for her misguided and unhappy brother, and to lay the following statement of facts before Your Excellency. My brother, Salatin Geiser, was inveigled into the service, entering the 39th Regt. How he ever could pass a Doctor, I can not understand, as he is a confirmed invalid, having once been scalded so severely as to disable him from carrying a knapsack or cartridge box, and he has spent many months in different hospitals. Being captured and paroled with his Regt. At Harpers Ferry, he was induced to stay behind, as his Regt. Was passing through Pittsburg, believing sincerely that he was free to do so, as he is entirely ignorant of military affairs and does not understand English. He then came to stay with us; his Regt. On the 11th of August he was arrested as a Deserter from the 39th Rgt. Being then no longer in existence, and sent to the Distributing Camp near Alexandria, where he was put in the 121st Rgt.

He is unable to perform military service, left his Rgt. Out of the sincere belief that he might do so, has never received any bounty, and altogether, if he has sinned, did so out of ignorance.

May mercy prevail in Your Excellencys heart, and restore an unhappy brother to his sorrowing sister and new lustre will be added to Your glorious name. Praying to God, to incline Your heart favorably towards us, I remain. Your Excellencys Loyal and devoted Servant Marion Anna Geiser.

There is a War Department label affixed to the reverse signed by the Assistant Adjutant General. Additional writing sums up the letter and states, Guttenberg, N. Asks discharge of her brother Salatin Geiser 121st N.

Arrested as a deserter from the 39th N. Now mustered out of service, on grounds of being a confirmed invalid, and not being a deserter.

CONDITION: Overall Very Good- with a one inch tear at the top left edge and a 4 ½ inch tear at the upper center, which are on both pages. SIZE: Measures approximately 7 ¾ x 11 5/8 inches. The item "1864 Civil War Letter to Abraham Lincoln Requesting Pardon NY Regt Guttenberg NJ" is in sale since Thursday, July 23, 2020. This item is in the category "Collectibles\Militaria\Civil War (1861-65)\Original Period Items\Correspondence, Mail".

The seller is "abvintagephotos" and is located in Pennsylvania. This item can be shipped worldwide.