1864 Civil War 84th NY Letter Grant. Will give the rebellion its death blow 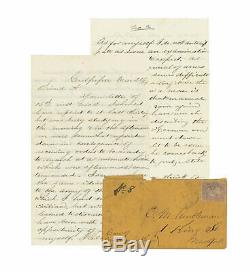 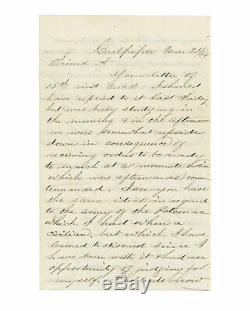 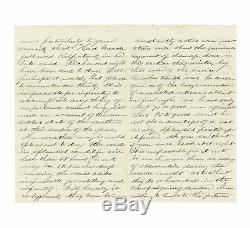 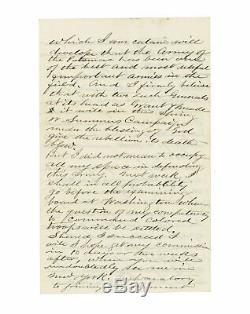 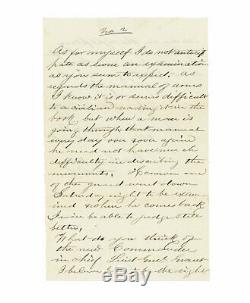 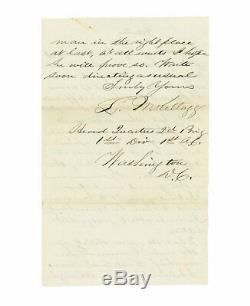 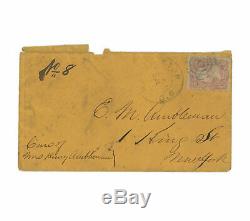 A very interesting 1864 letter written by Private Lewis M. Kellogg of the 84th New York Volunteers (14th Brooklyn). Writing to a friend in New York, Kellogg took issue with the friends ideas in regard to the Army of the Potomac which I had when a civilian, but which I have learned to discard since. In reply to the friends suggestion that had General Meade followed General Judson Kilpatrick s cavalry raid with more infantry Richmond might have been ours today, Kellogg wrote that it was impossible for infantry to accomplish anything of importance due to the winter weather and the state of the roads. He also explained how a large number of reenlisted veterans were then away from the army on furlough, leaving only about 70 or 80,000 men against Lees 85 to 90,000.

This was a significant overestimate of Lees strength, as it would be another month before Longstreets divisions arrived from Tennessee and at the opening of the Battle of the Wilderness in early May, Lee is estimated to have had around 65,000 men in total. Kellogg remained positive about the campaign ahead, writing.

And I firmly believe that with two such Generals at its head as Grant & Meade it will in this Spring or Summers Campaign under the blessing of God give the rebellion its death blow. Kellogg then turned to his upcoming visit to an examination board at which the question of my competency to command colored troops will be settled. He hoped to receive a commission in a regiment of Colored troops. He was unconcerned about his knowledge of the manual of arms, writing that when a man is going through that manual every day over & over again he need not have much difficulty in describing the movements. Kellogg closed the letter with comments about General Grant. What do you think of the new Commander in Chief, Lieut. I believe him to be the right man in the right place at last. At all events I hope he will prove so. Kellogg signed off from the headquarters if the 2nd Brigade, 1st Division, 1st Army Corps. Three days later, the 1st Corps was disbanded and the division became part of the 5th Corps. The enlistment term of the 84th New York expired in May and the veterans, including Kellogg, were transferred to the 5th New York Veteran Infantry, and on June 2 Kellogg would be wounded at Bethesda Church. Evidently he had passed the officers examination. Kellogg resigned in April, 1865.

The letter was written on 6 pages of 5 x 8 stationery, covering two separate sheets. It is in excellent condition with light toning. There is some slight edge separation at two points along the fold, each measuring no more than one inch.

Includes the original transmittal cover with a 3-cent stamp. Culpeper Mar 21 / 64. Your letter of 15th inst. I should have replied to it last Friday, but was busy studying in the morning & in the afternoon we were somewhat upside down in consequence of receiving orders to be ready to march at a moments notice, which were afterwards countermanded.

I see you have the same ideas in regard to the Army of the Potomac which I had when a civilian, but which I have learned to discard since. I have been with it & had an opportunity of judging for myself.

I allude now more particularly to your remark that Had Meade followed Kilpatrick in his late raid Richmond might have been ours today. Well perhaps it would, but please to remember one thing.

It is impossible for infantry to accomplish anything of importance around here just now on account of the unsettled state of the weather at this season of the year. The weather may be mild & pleasant today & the roads in splendid condition & in less than 48 hours the mud may be 6 to 8 inches deep, rendering the roads alike impassable for artillery and infantry.

With Cavalry it is different. They can be & are constantly active even now & time will show the immense amount of damage done in this section this winter by this arm of the service. Another trouble was in consequence of the large number of reenlisted veterans absent on furlough. We have only about 70 or 80,000 men against Lees 85 to 90,000, and he all the advantages of a naturally splendid position for defense. So you see that if you will look at it right it is impossible for us to be much more than an army of observation during the winter months.

But I did not mean to occupy all my space in defending this army. Next week I shall in all probability go before the examining board at Washington where the question of my competency to command colored troops will be settled. Should I succeed I will, I hope, get my commission in 10 days or two weeks after, when you will undoubtedly see me in New York, preparatory to joining my regiment.

As for myself, I do not anticipate as severe an examination as you seem to expect, as regards the manual of arms. I know it is or seems difficult to a civilian reading it in the book, but when a man is going through that manual every day over & over again he need not have much difficulty in describing the movements. However, one of the guard went down Saturday night to be examined & when he comes back I will be able to judge still better. Write soon directing as usual. Please see my other items for more interesting Civil War letters, documents, and images.

The item "1864 Civil War 84th NY Letter Grant. Will give the rebellion its death blow" is in sale since Saturday, December 21, 2019. This item is in the category "Collectibles\Militaria\Civil War (1861-65)\Original Period Items\Correspondence, Mail".